AMF Bowling Worldwide’s most recent bankruptcy filing comes as the company faces hundreds of millions of dollars in debt and an economy in which most people’s discretionary budgets – for such leisurely activities as bowling – aren’t what they once were.

The company, headquartered next to one of its bowling alleys in Hanover County, listed between 1,000 and 5,000 creditors in its initial bankruptcy filing, which was months in the works. It will continue to operate in the meantime with the help of $50 million in financing from some of its creditors. 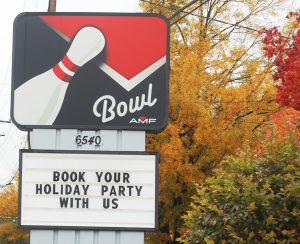 The company says its bowling alleys will remain open through the bankruptcy process.

AMF has about 260 employees locally and about 7,000 company-wide, AMF spokesman Merrell Wreden said.

The local figure includes 120 people in the company’s headquarters building and more than 100 spread throughout the company’s four Richmond bowling alleys.

AMF brought in approximately $400 million in revenue in its most recent fiscal year, Wreden said. But the bowling business isn’t what it used to be.

“What’s happened over time is league bowling has gone down. Open play bowling – the unscheduled visits from customers – has gone up,” Wreden said.

The predictable flow of money from bowling leagues is a vital source of revenue for a company that runs alleys all over the country.

But then the recession began to eat into open bowling revenue as well.

No plans for layoffs

AMF’s filing is the first large corporate bankruptcy in Richmond since Circuit City, S&K and LandAmerica filed in succession as the economy tanked in 2008.

But it’s the second bankruptcy for AMF. The company filed Chapter 11 and reorganized in 2001 and emerged from bankruptcy with far less debt.

The company said it expects to exit Chapter 11 within five months and to have its $300 million in debt reduced.

“The goal is to come out of the process with about half that much debt,” Wreden said.

More than a dozen AMF subsidiaries were simultaneously thrust into Chapter 11 on Tuesday as part of the plan. Hanover-based QubicaAMF, of which AMF owns 50 percent, is not involved in the filings.

AMF said its business operations, including its bowling alleys, would remain open during the Chapter 11 process. The company has 279 bowling locations, including 262 traditional alleys and nine upscale 300-brand bowling centers in the United States and eight locations in Mexico.

“We have no plans for any layoffs as a result of the restructuring,” Wreden said. “Like any retail chain, we will continue to look at our individual operating units and their performance. But we have no plans to close any centers during the current league season.”

AMF at one time was publicly traded but is now privately held by CHS Capital, a private equity firm in Chicago.

Last month, AMF missed at least one interest payment on some of its debt, according to a report from Standard & Poors. Its lenders include units or funds within Credit Suisse and Goldman Sachs.

S&P said AMF had a grace period until Nov. 6 to make the missed payment but wasn’t confident the payment would be made. S&P then downgraded the company’s debt ratings.

AMF’s average monthly payroll expenses run approximately $15 million, according to court filings, and it had approximately $4.5 million in cash on hand at the time of the bankruptcy filing.

Of the $50 million in interim financing it arranged, AMF will draw $35 million immediately, the filings show.

AMF was founded as American Machine Foundry Co. in 1900 and specialized in tobacco production equipment.

It got into the bowling business in the 1940s, introducing innovations such as automated pin-setting machines.

AMF’s history in Richmond ties into the fortune of one of the city’s most successful businessmen.

Bill Goodwin, today the owner of such gems as the Jefferson Hotel in Richmond and the Keswick resort near Charlottesville, worked a deal in 1986 to buy AMF Bowling for about $225 million.

“AMF was a collection at the time of very good brands,” Goodwin said when reached by phone Tuesday. “It used to have Harley Davidson, AMF Bakery Systems, Hatteras Yachts, and scuba diving and snow skiing [brands].”

Goodwin and his partners purchased just the bowling assets and held them for about a decade.

“It consisted of worldwide group of bowling centers as well as the manufacturing – machines, parts, computer scoring,” he said.

In 1996, Goodwin’s company sold AMF Bowling to Goldman Sachs in a massive deal valued, reportedly, at more than $1 billion. Local news reports at the time said Goodwin and his partners shared $50 million of the proceeds with AMF Bowling employees.

“It’s very sad to see it happen,” Goodwin said of Tuesday’s bankruptcy filing, adding that he hasn’t had any involvement in the company since the sale in 1996.

AMF has hired the law firms Kirkland & Ellis and McGuireWoods to handle the bankruptcy filings. McGuireWoods attorneys Dion Hayes and John Maddock are working the case.