A new grocery store is planned for an empty lot near Chesterfield Towne Center.

The arms race for the Richmond grocery market continues with yet another store in the works for an ambitious European chain.

Lidl, the German grocer that recently filed plans in Henrico County to build a new store on Laburnum Avenue, is eyeing another location across the river in Chesterfield County.

The company, through its MGP Retail Consulting affiliate, submitted plans with the county in mid-April to build a 36,000-square-foot store at 1301 Mall Drive, on a currently vacant lot across from the Chesterfield Towne Center.

Lidl, which has yet to open a store in the U.S., has been plotting an American expansion that’s to take shape in the next few years, according to press reports.

In tackling Richmond, it’s following in the footsteps of one of its biggest German competitors, Aldi, which recently filed plans for its seventh proposed store in the area. 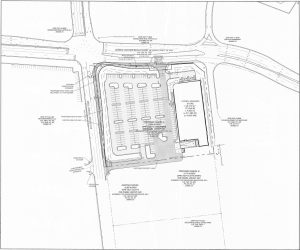 MGP Retail, which is based in Arlington, Virginia, did not return requests for comment on the Chesterfield plans but previously provided a prepared statement regarding Lidl’s potential United States locations.

“As has been reported, Lidl is in the early stages of preparation to operate in the United States. We are taking steps toward this effort. However we are not able to comment on any particular transaction at this time,” the company said.

The project would not need to go before the Planning Commission and could be approved in-house by Chesterfied’s Planning Department.

The development, which includes a store and 225-space parking lot, would sit on 5 of the 8 acres at 1301 Mall Drive. The property is owned by The Daniel Group, a developer in Danville, Virginia. The company has the land up for sale and listed with Cushman & Wakefield | Thalhimer broker Dave Smith.

Smith declined to identify the buyer or comment on the proposed plans but did confirm that 5 acres on the property have been under contract since last year. He said the sale should close by late summer or early fall and that the remaining 3 acres are still available for sale.

Smith said the property is ideal for retailers, with big names like Costco, Home Depot and Lowe’s surrounding the location.

“It’s right in the heart of a thriving retail market,” he said.

Lidl and Aldi follow similar models. Both market themselves as discount grocers and keep costs down with simplified stores and brand offerings and fees for grocery bags.

Lidl is owned by the Germany-based Schwarz Group and has 10,000 stores in 26 countries.

I really wish these two would look at some of the food deserts in the City. Smaller grocers like this, especially being discount stores, could really make a dent in the absence of viable grocery options in those areas. It seems like they could really clean up since they wouldn’t really have that much, if any, competition.