A downtown real estate investment fund has completed its first day on the Big Board.

The company’s stock, which trades under the symbol APLE, opened at $18 per share. Almost immediately after opening bell, Apple REIT’s stock dropped nearly 75 cents. By 11 a.m., it had reached a day low of $17.03.

But by Monday’s closing bell, the stock had returned to $18 per share. About 2.2 million of the company’s shares changed hands on Monday, according to market data.

The combined funds own a portfolio of 173 hotels, including the Richmond Marriott on East Broad Street and the Courtyard Marriott and Residence Inn in Shockoe Slip.

The company’s shares were previously non-traded, meaning they were not bought and sold on any public stock market and were therefore considered largely illiquid.

As trading came to a close Monday, Justin Knight, son of Glade Knight and now CEO of Apple Hospitality REIT, noted the day’s significance in an emailed statement. 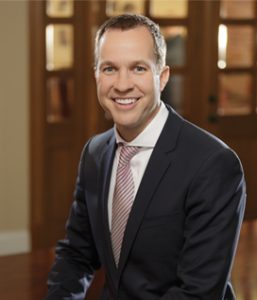 “We are excited to complete this important milestone for Apple Hospitality REIT and provide our existing shareholders with a flexible option of liquidity,” Knight wrote. “We believe that with our high quality hotel portfolio, our exceptional operating platform and our conservatively levered balance sheet, the Company is well positioned to enhance shareholder value as hotel industry fundamentals continue to strengthen.”

In addition to providing liquidity for shareholders, the IPO pegs a value to the holdings of the company’s insiders.

Glade Knight owned 16.25 million shares of Apple Hospitality REIT stock as of April 6, according to the company’s latest proxy statement. With a 2-for-1 reverse stock split that the company expected to enact in conjunction with the IPO, Monday’s results would bring the market value of Knight’s shares to $146.16 million.

Glade Knight’s potential payout was one of several pieces of the Apple Hospitality REIT merger that resulted in a lawsuit against parts of the firm and its leaders. Knight and others were sued by two shareholders of Apple REIT Nine who argued that the merger was harmful to certain shareholders and alleged conflicts of interest and self-dealing among insiders. The case remains open.

Apple REIT, over the years, employed New York broker David Lerner Associates to sell the shares of its open funds. It recently closed out its Apple REIT Ten fund to new investors after selling more than $1 billion worth of shares.

Another fund, Apple REIT Six, was sold to an outside buyer in 2013.

In conjunction with the public offering, the company also said it would begin a modified “Dutch Auction” to buy up to $200 million of its common shares from shareholders at between $19 and $21 per share. That was explained as a way for current shareholders to receive liquidity at a known price, rather than wait until market forces went into effect.

Following the offer, the company also planned to implement a share buyback program of up to $500 million of its common shares. The company said the timing of the buyback would be based on market conditions and other factors.

The company had 372.19 million shares outstanding going into the offering. That figure would be cut in half by the reverse stock split to 186 million.

Correction: An editing error in an earlier version of stated that Apple Hospitality REIT is conducting a 2-for-1 stock split. It is a reverse stock split.