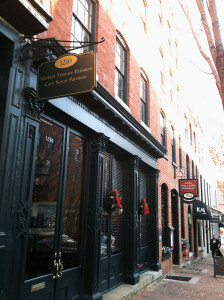 A new chief has taken the helm of a downtown financial firm.

He leads a company that has grown over the years to 12 offices in six states and more than 100 employees.

Tom Tullidge, who along with Mark Gambill founded Cary Street Partners in 2002, said the addition of Schmuckler caps a search for a leader with executive experience at a high level in the industry.

“The board stepped back earlier this year and decided to undergo an internal review to see what people were looking for in a CEO,” Tullidge said. “We felt like it was time to step it up a notch and bring in somebody that has had that role at larger firms.”

Tullidge said the firm also wanted someone to help guide it on a continued path of expansion. Cary Street Partners has grown in recent years to out-of-town markets, most recently by acquiring an investment banking firm in Atlanta in 2014 and opening a wealth management office in Missouri in March.

No other leadership changes are planned at the firm, Tullidge said.

One of Schmuckler’s tasks, Tullidge said, will be a focus on refining Cary Street Partners’ strategy.

“We’re asking him to look at what we’ve done well, where he thinks we can improve and spending time putting his mark on the strategy,” Tullidge said.

The company wouldn’t share revenue figures, but Tullidge said about two-thirds of the firm’s revenue is derived from its wealth management operations, the rest coming from investment banking.

Schmuckler grew up in Seattle and earned his undergraduate degree in finance from the University of Delaware.

As he begins at Cary Street Partners, Schmuckler said he’ll look to continue grow both sides of the firm’s business, while continuing its expansion streak, maintaining good service to its clients and minimizing turnover.

“I’m mindful of making sure that as we continue to grow, we don’t lose sight of those things,” he said.

He’s based out of Cary Street Partners’ Richmond office at 1210 E. Cary St. but said much of his time at the firm will initially be spent on the road, getting to know everyone at its offices around the country.

“Anybody can come in with a title and having a lot of experience,” he said. “I’m new to Richmond, I’m new to the firm, so I have a lot to learn. I’m going to have to earn the respect of all the people in the firm.”