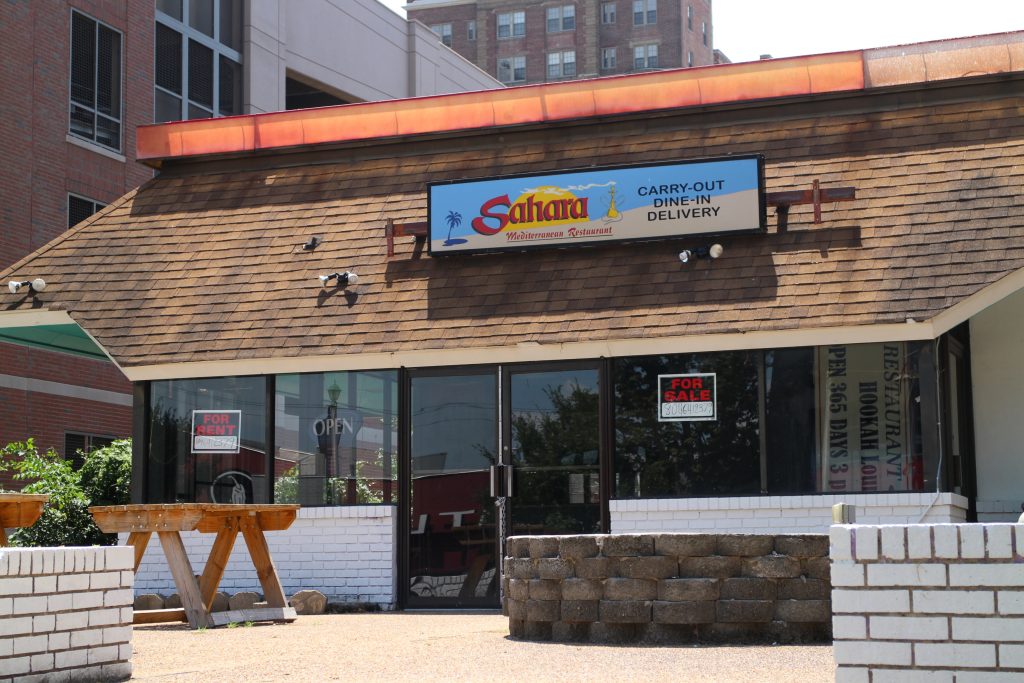 The Sahara restaurant and hookah bar building has been advertised for sale. Photos by Michael Thompson.

Some prime Ram country real estate is up for grabs.

For sale signs have been posted in the windows of Sahara, a restaurant and hookah lounge at 813 W. Grace St.

A call to the number listed on the signs was answered by a man identifying himself as the owner of the property, but he would not give his name or go into detail about his plans for the building.

It wouldn’t be the first time VCU and Sahara have crossed paths.

The restaurant sued the university in 2012 because two neighboring VCU construction projects were allegedly disrupting its business. The case was voluntarily dismissed, according to court records.

Built in 1975, the Sahara building is embedded amidst towering new parking decks, dormitories and academic buildings VCU has built in recent years. The business is also surrounded by larger competition in the form of Chipotle, Panera, Noodles & Co. and Panda Express.

In 2012, BizSense reported that Sahara owner Zuhir Idlbi said VCU attempted to buy the property, but he wouldn’t sell.

Mitzi Lee, VCU’s director of real estate services, would not comment on Wednesday on whether the school has an interest in buying the property.

Konstantinos and Ekaterini Hatzigiannidis have owned Sahara’s 3,900-square-foot building since 1998, according to city records. It was most recently assessed at $836,000.

A call to the phone number listed for Sahara reached a voice recording that says the number is temporarily disconnected.