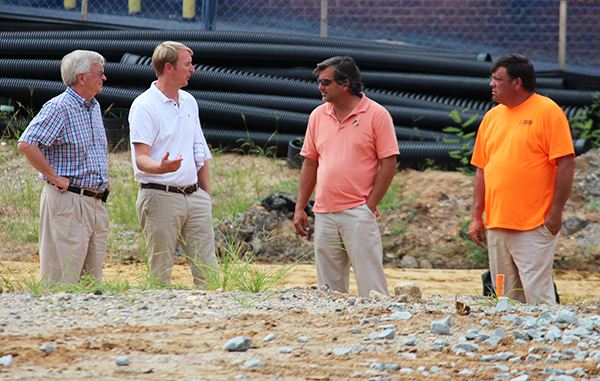 From left: John Nolde Jr. with The Nolde Co., developer John Nolde III, and Pat Montgomery and Rob Emerson with Messer Contracting on the site of Huntt’s Row. Photos by Jonathan Spiers.

A hole in the Fan is about to get filled.

Construction gets underway this week on Huntt’s Row, a cluster of eight row houses and two condos planned at 2601 Kensington Ave. at Kensington and North Robinson Street.

The new home construction – a rarity in the Fan – is on the site of the now demolished former home of the Boys and Girls Club of Metro Richmond.

Developer John Nolde III was at the site Tuesday morning, discussing with associates the work that he said would become more visible beginning today. He said initial construction of the first-floor units would involve digging footings, laying foundations and pouring concrete for basements for two of the units. 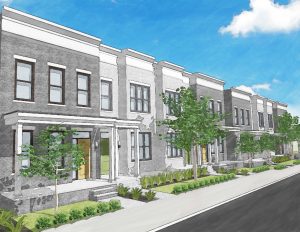 See plans for the development (PDF)

“Predevelopment is taking a little bit longer, but I’m not behind,” he said. “We’re still good for late next summer, hopefully, people moving into homes.”

Nolde said interest in Huntt’s Row has been high since his development and investment firm, NCRE, purchased the half-acre site in February for $1.05 million. NCRE is developing the site, with Nolde serving as general contractor and 510 Architects designing the units. Nolde estimates construction costs will total $3.5 million.

“We just put them on the market a couple weeks ago and have had tons of interest,” Nolde said last week. “Given what we’re seeing out there and the interest level, some of the interiors may change, because people are looking to customize them a bit more. But that was always the goal.”

Nolde has said he was encouraged to do the project by the success of Citizen 6, a row house development featuring modern-design facades on the 2600 block of Floyd Avenue.

Those homes, developed by Bill Chapman, were listed by One South Realty, which is also marketing Huntt’s Row.

The six homes that make up Citizen 6 were presold early in the construction process, which got underway about a year ago. Nolde said he expects Huntt’s Row will see similar presales, with the units – ranging from about 2,400 to 2,700 square feet – starting in the mid-$600,000s.