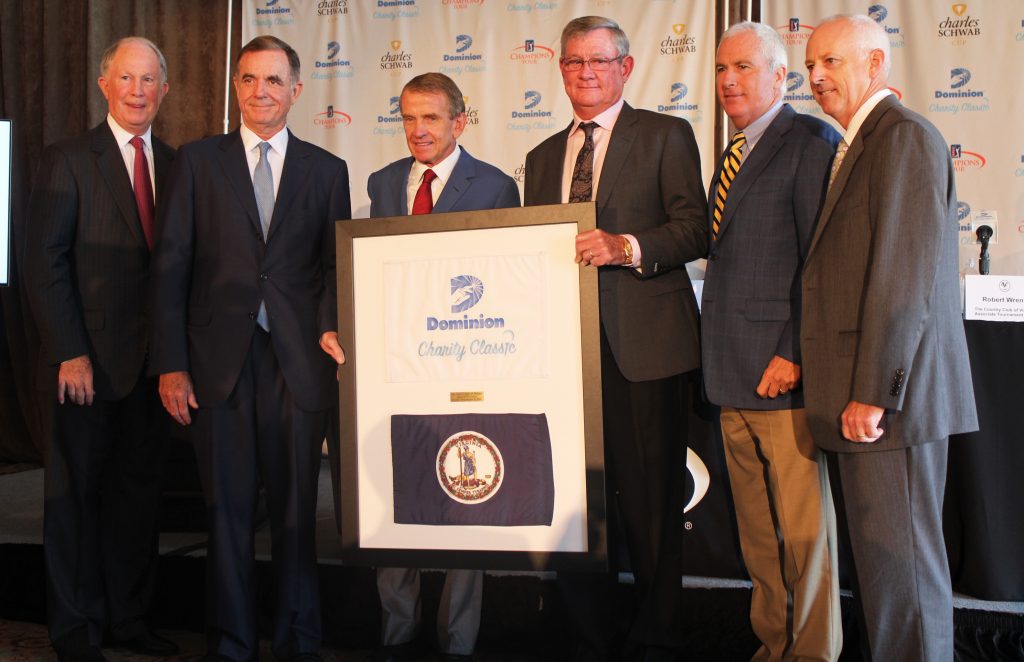 With the backing of one of the area’s biggest corporations and a venue at an elite local country club, the PGA is coming back to Richmond.

The PGA Tour on Thursday announced the creation of the Dominion Charity Classic, a golf tournament on its Champions Tour to be held next year at Country Club of Virginia’s James River Course.

Richmond-based utility giant Dominion Resources struck a deal with the PGA for naming rights on the event, which will bring the tournament to CCV for at least the next four years and will run next year from Oct. 31-Nov. 6.

“It’s a very proud moment in our history,” Tom Chewning, past president of CCV and former CFO of Dominion, said at the podium at a press conference at the club Thursday.

CCV beat out at least two other local clubs in landing the event – Independence Golf Club and Hermitage Country Club had both been vying for it.

The course’s clubhouse will be open to some spectators during the event.

Farrell, who is a member of CCV, as well as Kinloch Golf Club in Goochland, said Dominion began discussions with the PGA about six months ago. He said the association’s reputation of giving to charity was a draw for Dominion, which is routinely one of the largest corporate donors among local companies.

Neither Dominion nor the PGA would disclose the amount or the terms of Dominion’s deal to win naming rights.

Dominion spokesman Ryan Frazier said the money used for the sponsorship will come from the company’s overall earnings.

Champions Tour spokesman Mark Williams said the money from Dominion will be combined with other sponsorships and vendor revenue generated by the event to help put it on and pay for the purse.

Net proceeds from the event will be distributed to a yet unnamed charity that assists military veterans and will be chosen by Dominion.

CCV will open its normally private grounds to public ticket holders during the event. Its clubhouse will be open only to certain tiers of ticket holders, Williams said. The James River course was built in 1928.

In addition to bringing an outside crowd, the deal for the tournament involves the PGA paying an undisclosed fee to CCV each year during the four-year stretch. Williams said the fees will help CCV prepare for the event, including renovations to its 18th green.

The main attraction of the week-long event will be a three-day, 54-hole Champions Tour play-off tournament with a $2 million purse. The Champions Tour was formerly the Senior PGA Tour and features pros over the age of 50. Its current big names include Fred Couples, Tom Watson, Bernhard Langer and Colin Montgomerie.

The tournament will feature a 54-player field and will be the second of three play-off events for the Champions Tour’s new Charles Schwab Cup play-off structure.

The Dominion Charity Classic will be the first Champions Tour event to be held in Richmond since 1990, when the tour was still the Senior PGA and the Crestar Classic was played at Hermitage with a purse of $350,000.

I must not understand this – A large public utility, that charges the public to provide power services, takes a portion of that money and gives it away to causes that may or may not reflect the interests of their customers. They get the credit, but the public pays the (ever increasing) bills. Last I checked Dominion was doing very well financially. I am not sure I agree with this, or I must be missing something. And I really like the people involved, and golf.

In thinking more, I would like to rescind my comment. The good they are doing elevates the status and visibility of this region. The economic benefits are surely significant for all parties.

Needs to be a correction they will open the James River Course’s club house off South Gaskins to the public NOT the main on St Andrews Lane. This the better (and more scenic) course but they are not opening the big house!

Darrell, I agree more with your first comment. The thought of a utility company that has a monopoly charging their customers for charitable contributions is disturbing. I am all for charitable giving but not at the expense of us- the paying public. If they gave it out of potential bonuses to the higher up management or a collective gift from the employees that would be wonderful. Rather-we are the philanthropic people here not Dominion!! They just send a higher bill to our customers-who are the really the great guys in this scenario. Also noticed no service in a soup kitchen… Read more »