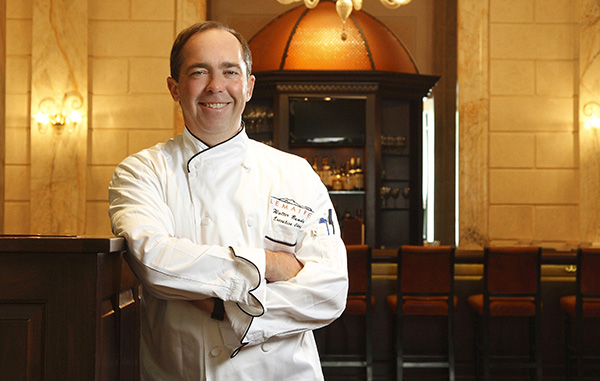 Walter Bundy is leaving his longtime post at The Jefferson Hotel’s Lemaire restaurant.

After working more than 15 years at a well-known downtown restaurant, a veteran chef is opening a place of his own in a new Henrico County mixed-use development.

Walter Bundy, who has been the executive chef at Lemaire in The Jefferson Hotel since 2001, plans to open a restaurant in Libbie Mill-Midtown, an 80-acre development by Gumenick Properties.

Bundy hasn’t yet finalized a name for the eatery, which will open next year in a 5,900-square-foot space at 4901 Libbie Mill East Blvd., just off Staples Mill Road. It will have a bar, outdoor patio and a private dining room. Bundy said he hopes to offer an approachable and affordable menu that features seasonal, Southern cuisine. 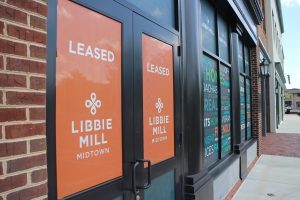 Bundy’s restaurant is the first to sign on to the development, apart from the restaurant within the Southern Season grocery store. Photos by Michael Thompson.

A restaurant of his own has been Bundy’s dream ever since he helped open The Blue Point Duck in Duck, North Carolina, 25 years ago.

A St. Christopher’s alum, Bundy said finding the right location in Richmond was a challenge.

“Being in the West End was important,” he said. “I’m from the West End. I think the Fan is very difficult with parking – same with downtown.”

In addition to the availability of parking, Bundy liked that his space at Libbie Mill can be designed and built from scratch. It’s in a stretch of recently built storefronts in the new development. H.L. Reed Design is designing the space; Bundy is still in talks with a builder. He said he also liked the community’s accessibility to major roads.

Libbie Mill is approved for up to 994 homes for sale and 1,096 apartments. In 10 years, when the development is expected to be finished, it will have 160,000 square feet of commercial space. 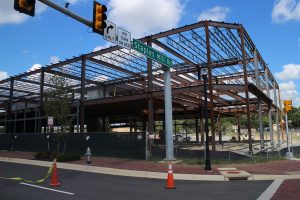 Work is underway on a 30,000-square-foot office building across from the restaurant space.

“I think as the development gains traction and more tenants come online, this community will develop on its own, and I wanted to be part of it,” Bundy said.

Bundy’s restaurant will join other tenants at Libbie Mill, including gourmet food store Southern Season, which has an in-house restaurant called Southerly, Richmond Memorial Health Foundation and Gumenick Properties. The new 60,000-square-foot Libbie Mill Library is slated to open on-site in November. And insurance company Rutherfoord will occupy the space on the first and second floors of an upcoming 30,000-square-foot building facing Bundy’s storefront.

Bundy wouldn’t say how much it will cost to get his restaurant open. He said he is backed by several investors whom he declined to name.

He’ll stay on at Lemaire through the end of the year.

During his time at Lemaire, Bundy has garnered praise for his cooking skills from Esquire magazine, as well as mentions in national publications like USA Today. He has also appeared on the Food Network and the Cooking Channel.

Great to see Chef Bundy go out on his own. Libbie Mill will be a excellent location for his patrons with the easy access, ample parking and proximity to the Near West End. This should be a win win for Gumenick Properties, the Community and Restaurateur.

Does anyone know if he will be hiring chefs and/or apprentices. I know someone who is wanting to be a chef and has finished her 1st year of culinary school and is wanting to apprentice.