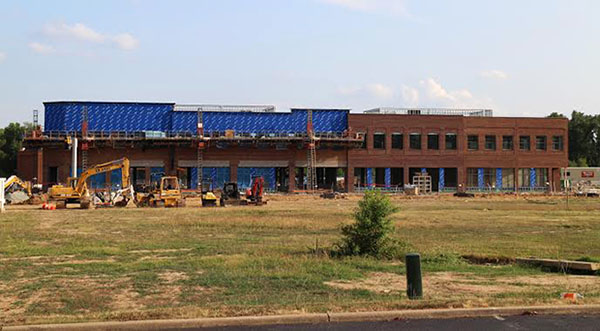 With its grocery anchor set to open next week, one of Richmond’s newest mixed-use developments has landed its first office tenant.

The RMHF is a nonprofit endowment fund that issues grants to healthcare providers in the Richmond area. Its move to Libbie Mill will be a 6,000-square-foot upgrade from the nonprofit’s current location at Bayberry Court in the West End.

Jeff Cribbs, president of RMHF, said the forthcoming residential, retail and office development sprouting around his new office drew the foundation to Libbie Mill. It will move Oct. 1.

“We think the location is interesting, and the concept of the mixed-use development will certainly be an exciting place for our staff and those who come and engage us to be in,” Cribbs said.

The Southern Season grocery store (right) is set to open next week.

“We’ll host it and in exchange for us housing them within our space, they’ll provide services and support for our grantees,” Cribbs said.

With its 10-year lease, the foundation will join Gumenick Properties on the second floor of Libbie Mill’s first office and retail building. Gumenick will relocate its headquarters from 6600 W. Broad St. by early 2015.

Between RMHF and Gumenick, the mixed-use building’s office space will be 100 percent occupied. There is still about 20,000 square feet of ground floor retail open in that building.

The office is one of two buildings nearly finished at Libbie Mill, an 80-acre development on long-vacant land that previously housed an apartment complex owned by Gumenick.

Its neighboring building is the new home of Southern Season, a North Carolina-based high-end grocer and restaurant. Southern Season finalized a 20-year, 50,000-square-foot lease in February 2013 and is slated to open later this month.

Over the next decade Gumenick plans to bring about 994 houses, 1,096 apartments, 160,000 square feet of retail space and 50,000 square feet of office space to Libbie Mill. The development will also include a new three-story Henrico County library building.

The next phase of Libbie Mill will include an apartment development and a second office and retail building.

Gumenick spokesman Edward Crews said Henrico County’s planning commission has approved those two pieces and the developer is in the planning phase now, but does not yet have a firm timeline.

“That is not imminent, but planning is underway,” Crews said.

No one can ever doubt the Gumenicks ability to pull off a spectacular development. This is an incredible investment in an area of Henrico that desperately needed an uplift and they are succeeding again. It looks great guys! I look forward to my first meal from Southern Seasons.