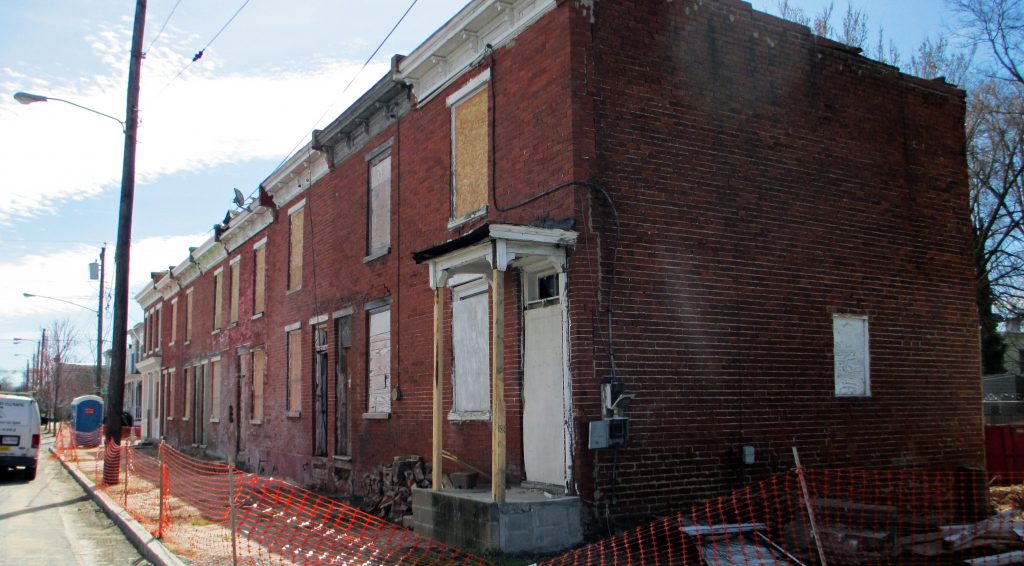 A Church Hill project is on hold as its developer sorts out a legal dispute with investors. Photo by Jonathan Spiers, March 2015.

Update: This story has been updated to include a statement from the defendants’ attorney

As she works to transform a block of Church Hill, a local developer is suing the investors she enlisted on the project for allegedly trying to bully her out of the deal.

Deanna Lewis and her renovation company Heirloom Restorations filed a lawsuit Aug. 31 against husband and wife John and Benedicte Whitworth and Deworth Restoration Associates, an LLC created for the project and jointly owned by the Whitworths and Lewis.

Lewis accuses the Whitworths and Deworth Restoration of a scheme to take control of the restoration project of seven houses, a vacant lot and a restaurant property along O Street between North 25th and North 26th streets and “oust Lewis and steal the value and future profit stream she created.”

The suit alleges that the Whitworths colluded with contractors, bankers and others to wrest the project away from Lewis and transition from silent partners into a controlling position.

“The Whitworths ambushed Lewis and have been attempting to bully her into relinquishing her valuable interest in Deworth for less than fair value,” the case reads.

The project will restore seven rowhouses and a former store and will add on a new home. Rendering courtesy of Deanna Lewis.

The case, filed in Richmond Circuit Court, claims counts of tortious interference and statutory conspiracy and seeks total damages of $8.35 million. The suit asks for a jury trial.

In an interview last week, Lewis said she wanted to avoid litigation.

“I did not want to go to this extreme,” she said. “We sent several letters and emails offering (the Whitworths) a buyout and got no response.”

The Whitworths are represented by attorneys Cullen Seltzer and Stefan Calos of Sans Anderson. Seltzer said in an email Thursday morning that his clients intend to address Lewis’ allegations in court.

“Benedicte and John Whitworth are committed neighbors and honest business people in Church Hill,” Seltzer said in the email. “Unfounded allegations against them have been made by a person with whom they very much regret having become associated in their business affairs.

“The Whitworths expect they will be fully vindicated and exonerated of meritless claims of wrongdoing.”

The relationship between Lewis and the Whitworths began in 2013, after the row of neglected buildings along O Street piqued the developer’s interest. She had the idea to turn them into single-family homes and a restaurant space and sought private investors to help finance it.

Lewis said a mutual friend vouched for the Whitworths.

“I was comfortable because they were friends of a friend, and they were highly recommended,” Lewis said.

According to the lawsuit, the Whitworths were to be silent partners in Deworth Restoration and provide accounting services on the project, with each spouse owning a 25 percent stake and Lewis owning the remaining 50 percent.

“Lewis was to be the face of Deworth and the project and Heirloom would serve as the project manager,” the case states. “The Whitworths specifically stated they did not want their participation in the project known to anyone.”

Eventually, the case alleges, the Whitworths had their attorney send Lewis a letter accusing her of “managerial improprieties” and attempted to buy her out of the partnership at a low valuation. 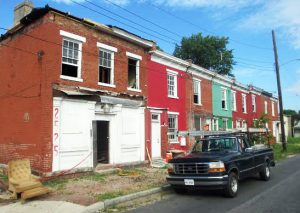 The string of houses was long neglected and originally covered in colorful paint. Photo by Brandy Brubaker, June 2014.

The letter, according to the lawsuit, is said to include explicit threats to damage Lewis’ professional reputation unless she agreed to the “draconian and tortious demands.”

The case alleges the Whitworths carried out a number of actions related to the development without Lewis’ knowledge, including having Deworth Restoration close on the sale of one of the O Street properties.

Lewis further claims the Whitworths created a separate bank account for the company without her knowledge.

“When we found out about the bank account, I had no choice” but to sue, Lewis said last week. “That’s like the icing on the cake.”

This isn’t the first time John Whitworth has been caught up in a Church Hill business dispute. He was one of several defendants sued by Captain Buzzy’s Beanery owner Bob Buffington, who accused them of trying to thwart his plans to expand the coffee shop’s hours and sell beer and wine.

Those allegations against John Whitworth, which were ongoing when the Whitworths and Lewis joined forces, were dismissed on the grounds that he had no interest in an existing or envisioned venture that sold alcohol and would compete with Buzzy’s. That’s according to Lewis’ suit, which references the Buzzy’s case.

“After said lawsuit was dismissed, John Whitworth and his wife were free to hijack the (O Street) project and heist the value and profits Lewis had created through her and Heirloom’s efforts,” Lewis’ case states.

Buffington was represented in his case by Richmond attorney D. Hayden Fisher, whom Lewis also hired to represent her in her suit.

Deworth now owns that stretch of O Street. One of the homes has been restored and sold and the rest have yet to be fully renovated as work has been put on hold, Lewis said. She said she hopes to reach an amicable settlement with the Whitworths and continue the project without them.

“I gave 21 months of my life to it with only a few months of pay,” Lewis said. “Imagine what it takes to do one property in the city of Richmond and multiply that by 10.”

Sad to hear another of these situations.