It won’t be completely finished in time for the bike race, but Ted and Katie Ukrop’s new downtown hotel will start welcoming guests as planned this Thursday, Sept. 17.

Construction crews continue to work on the Quirk Hotel at 201 W. Broad St. The hotel and future home of Quirk Gallery had been aiming to fully open at the start of this month, ahead of the UCI Road World Championships, but work that remained pushed that date back two weeks.

Now, just days before the cycling event is set to start outside its doorstep, the 75-room hotel is planning to open in phases, with a couple of floors accommodating guests starting Thursday, two more floors opening Friday, and the rest of the rooms opening Nov. 1.

The ground-floor lobby and the in-house Maple & Pine Restaurant will open Thursday, as well, the Quirk Gallery will open Saturday, and a public-accessible rooftop terrace and bar will open Nov. 1, according to hotel representatives who were on site Monday. 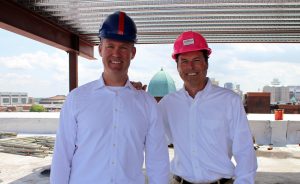 Christian Kiniry (left) and Ted Ukrop during a May hard-hat tour of the Quirk Hotel. Photo by Katie Demeria.

The hotel offered a sneak peek ahead of Thursday’s opening, when Quirk will join many area hotels aiming to capitalize on the nine-day race event.

Between Thursday and Friday, 54 rooms will open at Quirk, all of which are booked over the course of the race, said Kelsey Sharp of DKC, a public relations firm working with the hotel. Best available room rates during those days range from $269 to $309 a night, according to the hotel’s website.

The hotel fills the former J.B. Mosby & Co. department store at West Broad and Jefferson streets. It also expands over an adjacent three-story building at 207 W. Broad St. that will house the gallery on the ground floor and additional rooms above. Between the two buildings, the hotel spans a total of 60,000 square feet.

Quirk Gallery will relocate into the hotel from its current location a block up the street. Gallery owner Katie Ukrop and husband Ted Ukrop are developing the hotel-gallery hybrid with Christian Kiniry of Bank Street Advisors.

The project was designed by 3north Architects, with interior design by Poesis and general contracting by WM Jordan. Denver-based Destination Hotels was selected to manage the property. TowneBank is financing the project. 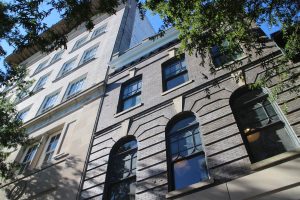 The hotel features an open-air courtyard, complete with marble floor tiles, that was created by removing sections of floors above it. Wooden floor joists that were removed were reused throughout the hotel, providing wood for bed frames, the restaurant bar and various shelving. Narrow holes where the 120-year-old joists were located remain visible on the courtyard walls.

Because redeveloping the department store portion involved historic tax credits, much of that structure maintains its original 1916 features, such as large paned windows and arched columns in the lobby. The smaller space, which was not restricted by those rules, allowed for more creativity, said Kate Brown, director of sales and marketing for Quirk.

To complement the gallery, the hotel features artwork and custom-designed pieces by local and regional artists. Pillows feature artistic designs, and even ice buckets were crafted by a local artist, Brown said.

In addition to rooms and suites, the hotel includes a meeting room that looks out onto the courtyard, as well as a top-floor terrace that can likewise be rented for private events and gatherings. The terrace and rooftop bar will be open to the public when the space is not booked.

Also open to the public is the Maple & Pine Restaurant, headed by David Dunlap, the former executive chef at the Ashby Inn in Paris, Virginia. The lobby also has a cafe that will serve local Blanchard’s Coffee and CaryTown Teas exclusively, Brown said.