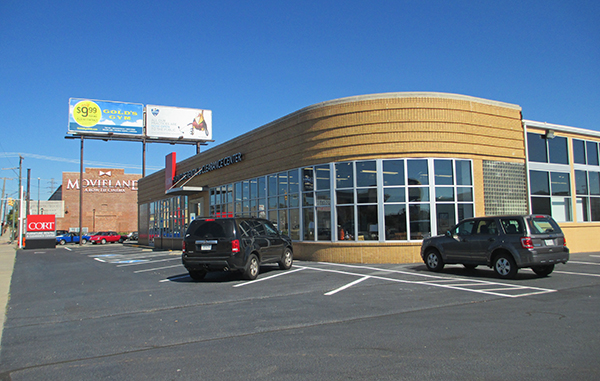 Park Group is joining Cort Furniture in a Boulevard property next to the Movieland. Photo by Jonathan Spiers.

A Shockoe Bottom apartment project is prompting a local production studio to turn its cameras to the Boulevard.

The Park Group is relocating its studio at 1910 E. Franklin St. to a larger space at 1207-B N. Boulevard, on the back side of the recently opened Cort Furniture retail building.

The move comes as Park Group’s current studio makes way for as many as 156 apartments that are planned for the block between 19th and 20th streets and Franklin and Grace streets. Park Group’s main office and post-production facility in Shockoe Slip will remain at 23 S. 13th St.

At 15,865 square feet, the new space at North Boulevard and Leigh Street will triple its current studio square footage. Park Group founder Dave Trownsell said the move allows his company to expand its production space, where it stores its equipment and builds film sets.

“It was an opportune time for us to expand,” he said. “We were running out of room before, and we were out of space.”

Plans are still in the works for a new apartment complex in Shockoe Bottom.

Trownsell said he was forewarned that the apartment development would be coming someday. His landlord for the Franklin space, Charles Bice, is one of four developers planning the five-story, $24 million project.

“A couple times it had triggered that they might want to do something, so we kind of had a heads-up for a couple of years now,” Trownsell said.

Another studio, Mondial, was also forced to relocate to make way for the apartments. That company, which shared the Franklin Street building, recently moved up the street into a larger, remodeled space at 2006 E. Franklin St.

Trownsell said he was drawn to the Boulevard for the building’s facilities and proximity to Scott’s Addition, which has become a hotbed for design firms and other creative ventures – among them The Studio Center, one of Park Group’s competitors.

Plans for the new studio space include construction of a larger video production and multi-usage facility, to be completed in phases to allow production to get started. Trownsell said the budget for that work is in development. He said the company also plans to sublet the space for other “like-minded businesses and photographers.”

“It’s not easy finding a space to do production work, because it needs to be soundproofed,” he said. “We’re doing extensive refurbishing of that facility on the Boulevard.”

Founded in 1986, Park Group has produced video spots and commercials for such clients as Virginia Lottery, nTelos, Walmart and Capital One.

As for the apartment project, construction will raze the building on Franklin Street but otherwise be built on an existing parking lot. The project remains under review and has received approval from the city’s commission of architectural review. The developers have said they hope to break ground by year’s end.

Hi Jonathan – Ali Newton is also a Hokie (and the middle sister of my 3 wonderful daughters)! vince newton