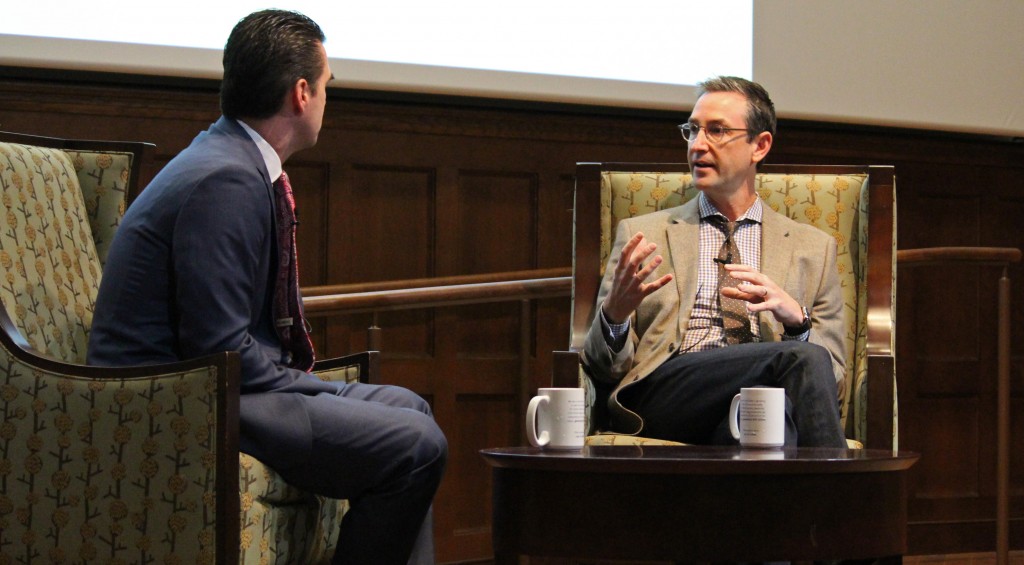 Just days before he would take the stage with a reunited Flannel Animals, the band he fronted as an undergrad at the College of William & Mary, Matt Williams took a different kind of stage at the University of Richmond, sitting in the hot seat as the last guest of the year for the Robins School of Business’ C-Suite Conversations.

CEO of The Martin Agency, Williams talked for an hour with Senior Associate Dean Richard Coughlan about the agency’s successes in its 50-year history, what he envisions in its next 50 years, and what he has learned about business since his days at William & Mary, where his band is reuniting this weekend for homecoming.

“It’s gonna be huge,” Williams said at the close of the Q&A, which drew a crowd of students and business colleagues to the auditorium in UR’s Queally Hall.

Coughlan described Williams as a novelty in the marketing industry for having an MBA, which he picked up from Northwestern’s Kellogg School of Management. His undergraduate degree from William & Mary is in marketing.

Williams said he decided to go back to school because he thought an MBA would help him relate better to the agency’s clients.

“That did happen, but it happened only marginally,” he said. “What the primary benefit of the MBA was to me was that it allowed me to step back and look at The Martin Agency as a company, and not just as an advertising agency.”

In doing so, Williams said he began to think about the other sides of the business: accounting, long-term strategic planning, human resources, organizational development – “all the things that a general manager is taught to think about in an MBA program,” he said.

“It was really eye-opening, and I loved it,” he said. “And it made me realize, number one, how special this company is, but it also made me realize how broad-sweeping the job of a CEO is: It’s not to work in the company; it’s to work on the company.”

From his first three years as Martin’s fifth CEO, Williams said he has also learned to measure success three ways – creatively, culturally and economically – as opposed to looking only at awards or bottom lines.

“I feel like it’s a bit of a cop-out when senior people in corporate America talk about their only responsibility being shareholder value. I think it’s a rationalization that’s convenient, but not right,” Williams said.

On the heels of the agency’s 50th anniversary, which employees celebrated with a party at its Shockoe Slip headquarters, Williams said the next 50 years for Martin would see further expansion into overseas markets – it recently opened an office in London in addition to one in New York – as well as recognition among the world’s creative leaders.

“I want to be thought of as one of the most creative companies in the world. I want The Martin Agency to be spoken of in the same breath as Google,” he said. “I want us to be doing the best strategic and creative work in the world.

“We’re in a business where a company that has succeeded for 50 years is an anomaly. It is the greatest privilege imaginable to me professionally to be entrusted with the responsibility of leading that company.”

Williams also noted the change that he has seen in Richmond over his 24 years at Martin and its impact on the agency in terms of recruitment and retention.

“Richmond used to make it harder for us to attract talent, and that has changed completely in the last five or six years,” he said. “Richmond is a huge asset for us.”