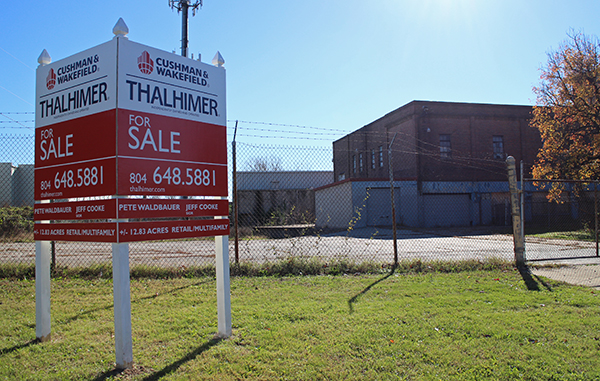 A warehouse complex just across the river in Manchester has been sold after years jumping on and off the market. Photos by Katie Demeria.

A significant chunk of Manchester real estate has landed in the hands of a local development group that will likely look to bring more retail to the fast-growing neighborhood.

Harper Associates, through Manchester Town Center LLC, purchased a 12.8-acre parcel near the intersection of Semmes and Cowardin avenues last week for $3.7 million.

Will Allen, portfolio manager for Harper Associates, said the company’s plans for the property are preliminary, but it is considering a mixed-use project with a particular eye on retail.

The property, which sits 1802 Semmes Ave., has 300,000 square feet of existing warehouse space, and Allen said the developer has no immediate plans to demolish the buildings.

“We’re on the very front edge of figuring out what we’re going to do there,” Allen said. “We’re excited, and we think Manchester has a lot of good things going on. There are a lot of possibilities.”

Formed in the ’90s, Harper Associates has experience in retail-centric real estate. Its other developments include the Lowe’s and Kroger shopping center at West Broad and Lombardy streets, and the Walmart and Lowe’s-anchored development at Forest Hill Avenue and Chippenham Parkway. It currently manages both properties. 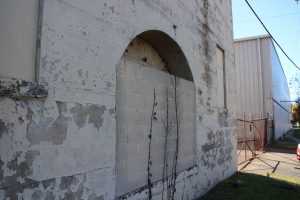 The property has several warehouses over the 12 acres.

In addition to the potential for retail, Allen said apartments might be a possibility for the Semmes site, but nothing has been finalized.

“There is a lot of apartment growth in the area, so we’re certainly receptive to it,” Allen said. “But we’ve seen, as far as the retail coming, it’s probably not as mature as what happened with the apartments, so there may be an opportunity.”

The seller in the deal was locally based Alleghany Warehouse Co., which had owned the property since around the 1960s, company President John Bryan said.

Over the years it has leased warehouse space to different tenants. Bryan said the property has been on and off the market since before the 2008 recession, when the company was having trouble finding tenants for that area of town. A deal that was in place fell apart during the recession.

“Manchester, thankfully, as a district is developing, so I think the buyer is interested in being part of that development in the neighborhood,” Bryan said.

“The economy, on the macro scale, has gotten to a point in which development is once again in vogue, and on the micro scale, Manchester has shown itself to be the real deal with all the changes going on over there,” Dirom said.

Jeff Cooke of Cushman & Wakefield | Thalhimer and Andrew Gibb of 7 Hills Advisors represented the seller in the deal.

The property was most recently valued at $2.5 million, according to city records.

Any eventual development on the site would follow a steady stream of construction in Manchester. Among the neighborhood’s largest ongoing projects are Thalhimer Realty Partners’ Reynolds South development, where the owners are hoping to lure Manchester’s first grocery store, and a $5 million project RJ Smith Cos. is leading along Hull Street.

And another 8-acre swath of the Southside neighborhood is up for sale nearby.

Nothing about that site is stadium worthy. Respectful retail yes. This area is the Sahara of a food desert I hope this new ownership group can move beyond their suburban development standard, and create a true urban experience. This means retention and recreation of an interconnected street grid, retention of historic existing fabric to add legitimacy, and parking structures, or making surface parking secondary, not the first thing you see.

As far as I know that plot of land is in Woodland Heights, not Manchester. Manchester was incorporated into the city years ago; I’ve not heard anyone refer to all of south side as Manchester before.

I’d really love to see a grocery store open there. We are in need of a closer, real food option.

This land is actually in the neighborhood of Swansboro. It would be nice to see our neighborhood acknowledged. All is not Manchester and Woodland Heights south of the Lee bridge.
http://eservices.ci.richmond.va.us/applications/propertysearch/Detail.aspx?pin=S0000420001

This has the potential to be an amazing opportunity for a wonderfully quaint niche of boutique retail shops, restaurants and a much needed grocery store for us here in the Woodland Heights, Swansboro and all of our other South-Side neighborhoods. Developing and restoring the space to retain the historical architecture, parks and walkable environment is so incredibly critical.

A grocery store would serve the neighborhood well. However it must be a retail enterprise that suits the residents. A Kroger would be appropriate for this area. I live a few blocks away and forsee a lot of protests if a Walmart were slated to move in. I probably would be one.

The City Market looks awesome. I truly wish the area could support something so sophisticated.

I’m with everyone else. A true urban grocery store with no paved lot is ideal.