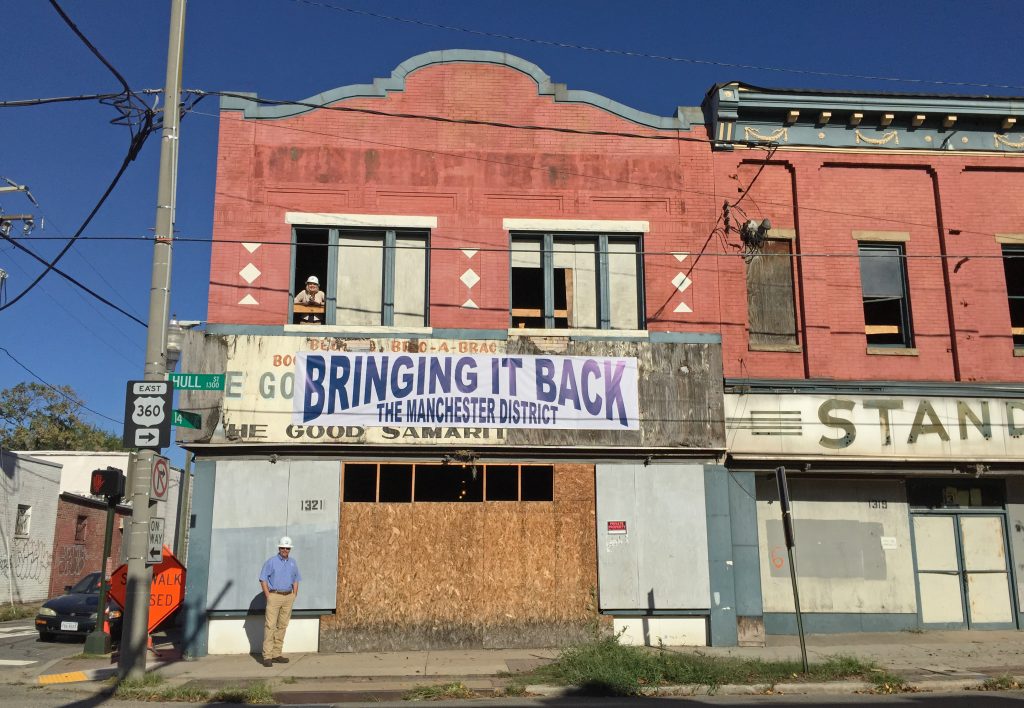 Janet King and Richard Smith hope to revive a stretch of Manchester. Photos by Katie Demeria.

In its urban development debut, a local construction company is trying to create what it envisions as a Carytown for Manchester.

RJ Smith Cos. has embarked on a $5 million investment in the Southside neighborhood that will add up to four commercial spaces, aimed at restaurants, retail and offices, and 34 apartment units along Hull and Bainbridge streets.

And that’s just the first phase. Led by President Richard Smith and Senior Vice President Janet King, the project would then tackle the 1500 block of Hull Street in late 2016 and into 2017, where the company has purchased three properties and plans to add more commercial space. That will bring the total investment up to almost $9 million.

“This is a long-term investment,” Smith said. “We’re putting in three years of work from here on out.”

The project, dubbed Urban Charm, is aimed at making Manchester a more walkable neighborhood, something similar to Carytown – perhaps the Southside’s own “Hulltown,” King said.

The first phase is already underway, with construction crews busy renovating 1319 and 1321 Hull St., which were constructed in 1920 and will have 20 apartments with a mix of one- and two- bedroom units. 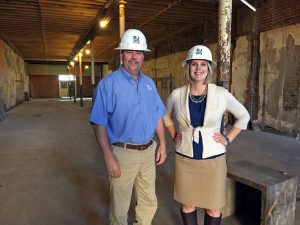 Across 14th Street, the company will have two more commercial spaces at 1401 and 1405 Hull St., each 2,000 square feet. Smith and King said they’d like to secure another restaurant tenant there. Construction should start no later than next spring.

The first phase also includes the Bainbridge Art Center at 1312 Bainbridge St., which RJ Smith purchased this summer. The center will be demolished and replaced by a new 9,000-square-foot building with about 14 apartments. Demolition will start next month, and construction should start in late spring of next year. The building formerly housed artist Mehmet Sahin Altug, who is in the process of moving his studio to Carytown.

Both Smith and King have connections to the neighborhood – each with a parent who lived in the area. Smith said the area is in desperate need of more commercial space with all the residents filling in Manchester’s new apartment projects. Signs on the buildings declare that the developers are “Bringing it back.”

“We want to bring commerce west of Commerce,” Smith said. “The only thing left is retail.”

Founded in 1995, RJ Smith provides construction services throughout Virginia, including general contracting, demolition, utilities, concrete recycling and snow removal. This is its first venture into the urban development scene.

RJ Smith is acting as its own general contractor on the project and working with architect Sean Wheeler of Walter Parks Architects. It is seeking historic tax credits for the existing buildings and has secured a loan with First Capital Bank.

Broker Yasmine Hamad of Colliers International represented each of the separate sellers in the transactions, and represented both the seller and the buyer in the Bainbridge Street deal.

Hamad approached many owners on Hull Street and encouraged them to put their buildings on the market, noticing that many were prime spots for historic tax credit rehabs.

“The market conditions were ripe,” she said.

Martin Blum of Colliers is handling the leasing for the commercial spaces at 1401 and 1405 Hull St., while Terry Earnest of Chesterfield Commercial Realty is working leasing on the space at 1319 and 1321 Hull St.

Elsewhere in Manchester, construction continues to boom, especially on apartment projects. Two of the largest plans in the works are Thalhimer Realty Partners’ ongoing redevelopment of the Reynolds South site and Fountainhead Properties’ plans for two 16-story towers.

This is great news! At one time this was “Main Street Manchester”- a thriving retail area. I’m so happy it will be again. Richmond is a great small city and getting better all the time.

When Yasmine Hamad and I met Richard and Janet on Hull Street on a frigid day last winter, they told us that were interested in leading the way for a resurrection of the corridor, rather than following other builders to shock or Scott’s Addition. They wanted to be the leaders. They are the perfect company to take charge in the old business district. And they’ve hired the right guy in Martin Blum to bring city retailers to Manchester.

Well now that the resurgence is on it’s way I hope that the city finally can decided on the new piece of public art they will install at the Hull Street library, maybe the developers should have a talk with the public arts commission, maybe they could help add a bit more pizzazz to the neighborhood with influential voices.

Are they inspired by the recent Sodasopa / Whole Foods episode of South Park? If you didn’t see that episode, check it out. You will not be able to look at Short Pump the same again!

This is all happening literally behind and next to my house.. It’s exciting and from the looks and sounds of it all it will be done right. Can’t wait to be able to walk out the backdoor and right to a restaurant and bar. Sweet Fix has already opened on 10th and Hull!

Ms. King’s suggestion of “Hulltown” is clever, but the boat will be missed if it isn’t called “Dogtown!” Historical, you know!

As a first-time home buyer who recently purchased into the neighborhood, this is very exciting news. With the increase in residents, I picture there are a lot of folks in Manchester who are looking for neighborhood shops, restaurants, and retail stores to support with their dollars.

Aside from blue collar construction jobs, I hope this planned development will also provide business opportunities for qualified minority subcontractors in the local community.

I wish all the best luck in the world but I remember reading this type article before when HOPE VI homes were built, when Miller & Associates started their work, and when the Courthouse was renovated. All great projects but first people are not going to walk across Commerce Road and two there still is NOT enough critical mass. Look at how big (and the high incomes) surround Carytown. This mass just does not exist in the small Dogtown area nor is there enough income to support much from either Newtowne South or Blackwell.

But there IS money just two intersections away in Woodland Heights, Westover Hills, and Forest Hill. We’re all rooting for Manchester to grow since we don’t actually have much space for expansion over here. I am more than willing to take a $3 Uber or drive over to Manchester for dining and shopping! Remember, even ten years ago, Carytown/fan wasn’t what it is today.

I hope they do well too but ride over to “Westover Walk” at Westover and Forest Hill. Vacancies abound, old video store turned to dialysis center, and the old CVS store was demolished for new “old” row storefronts that were NEVER built as there is very little market for small stores except for niche restaurants and stores. There is NO market for big box retail yet at all in the area. Carytown has been a shopping destination since 1930s when Downtown Manchester was also still booming. Heck, I live near Meadow and Cary Street; the retail with condos on Meadow… Read more »

Consider using the Downtown Mall in C- ville as a template and making it a destination for locals and visitors, with pedestrian / bike only traffic, willow oaks trees planted in the center of brick-paved streets, outdoor dining, busking, etc. Richmond has the right population and culture to support such a hub.

Kudos to RJ Smith Co. for taking the lead! So many people have wanted to see such a transformation, and believe in Manchester. It is a diamond in the rough, waiting no more to be chiseled to perfection.

My sincere hope is that the positive vibe spreads to the locals, who in turn find $ opportunities from the changes, who in turn reinvest, and create a virtuous cycle of growth.

When has the City of Richmond ever had sustainability with commerce?

Howabout a grocery store?
We used to have a Community Pride a few blocks west on West 20th St. in that big quanset hut currently held by a religious group with delusions of the grandeur of some huge electric McChurch that isn’t happening. Be nice for that building to reenter a useful existence as a grocery store again!