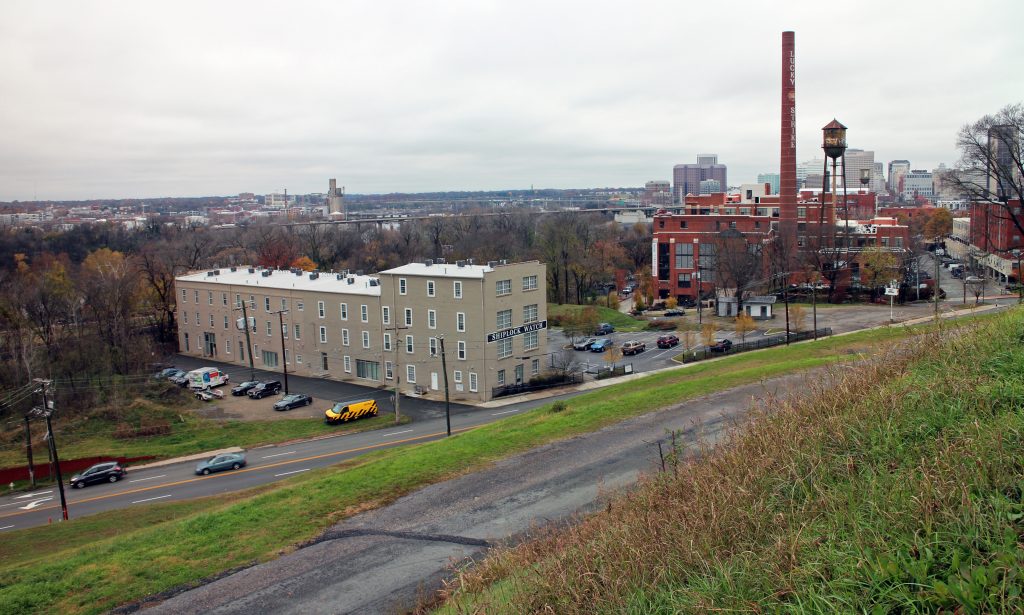 Lots on either side of the Lofts at Shiplock Watch apartment building are being floated for development. Photo by Jonathan Spiers.

(Editor’s note: This story has been revised to include details about proffers and restrictions on building height that could not be confirmed prior to publication.)

The site of a controversial Shockoe Bottom high-rise proposal that drew opposition from Church Hill residents last year is back on a developer’s drawing board.

The two properties, separated by the Lofts at Shiplock Watch, are both proposed for rezoning from M-1 light industrial district to B-5C central business district conditional. The change would allow for residential dwellings and commercial uses not permitted in industrial zoning districts.

The Richmond Planning Commission is set to consider the requests at its meeting next Monday, Dec. 7.

Reached last week, Salomonsky said he did not want to discuss plans for the properties until after the commission’s required public hearing. Zoning approval would ultimately come from City Council, which is scheduled to address the requests the following Monday.

The Pear Street property, across from the Lucky Strike building at the end of East Cary Street, is the same site of a proposed 13-story condo building that received the commission’s support last year but was ultimately withdrawn due to concerns from area residents about impacts on views from Church Hill.

The developer behind that proposal was David White, Salomonsky’s partner in Historic Housing, a Shockoe Bottom real estate firm. The property was purchased in 2001 for $131,250 by RockettsView SCP LP, which lists the same address as Historic Housing and also owns Lofts at Shiplock Watch, previously known as Rocketts View Apartments.

Conditions proffered in Salomonsky’s rezoning application for the Peach Street property include a building height restriction of 38 feet above the ground along Main Street, meaning a building there would be about three stories in height. The restriction would not apply to stair towers, elevator towers and mechanical equipment on the roof, the latter of which would be screened.

Proffers for the Pear Street property do not address building height, but the requested zoning would restrict both properties to five stories.

An ordinance prepared for City Council in regard to the Pear Street property says a rezoning would be contingent on conditions proffered by Salomonsky in a letter received in June. Those proffers include a minimum of one parking space and one window per apartment, and that the exterior of the building would be predominantly glass and brick. The same conditions would also apply to the Peach Street property.

That property is owned by Shiplock East LLC, which likewise shares the same address with Salomonsky. The LLC purchased it in 2013 for $250,000, according to city records.

The 13-story building proposed by White last year would have reached 16 stories in height from its lowest point on the down-sloping plot. Condo units were proposed to begin at about 1,100 square feet and start in the low to mid-$300,000s.

The Pear Street property is also catty-corner across Pear from the site of another proposed high-rise development: an 11-story condo building pitched by developers David Johannas and Jerry Peters.

That project, which Johannas has said would be consistent with existing building elevations along Tobacco Row, would require a special use permit from the city. Johannas said Tuesday he is preparing an application to submit to the city after meeting with residents and neighborhood groups.

The aesthetic value of the view from Libbie Hill Park is most valuable to Richmond, to its tourism, history, namesake, and the general welfare of its citizens who flock to the park daily for its incredible views and excellent public space. Any structure blocking or impeding those views would be a travesty to the citizens of Richmond and the thousands of tourists who visit the park annually. Preserving this gem should be focus of all citizens and hopefully our City Council and planning commission will act as good stewards of the citizens interests in maintaining our beautiful River and skyline… Read more »

After visiting Richmond, London this past September and spending time on Richmond Hill there overlooking the Thames I now fully understand and value the view of the James from Liibbie Hill. The views truly are near identical. This view should be preserved since it is the foundation of the formation of Richmond, VA.

I just moved to VA this past year…I live right by the proposed site. I understand the concern about the view…but with all do respect the “hill, park and area” are very neglected. My first day driving to Richmond took me down Main and viewing cobblestone road, hill and what looked like stairs. It was so overgrown with weeds…I’m not sure if this is normal…but the next week they were clearing the hill for the impending bike race. I have had the opportunity to live in many cities and most of them took pride in their parks. I believe Richmond… Read more »

I live in the apartments there. I am not opposed to dense development, in fact I prefer it to suburban sprawl. That said, the historic and tourist revenue value of the view from atop Libby Hill should drive the type of development in the entire viewshed. I suggest that any new buildings should be limited in height. I would also propose, that the city administrators working with council, develop a zoning overlay for the entire viewshed that would dictate the types of building allowed instead of approaching each new building proposal in a piecemeal fashion. Additionally, I have concerns about… Read more »