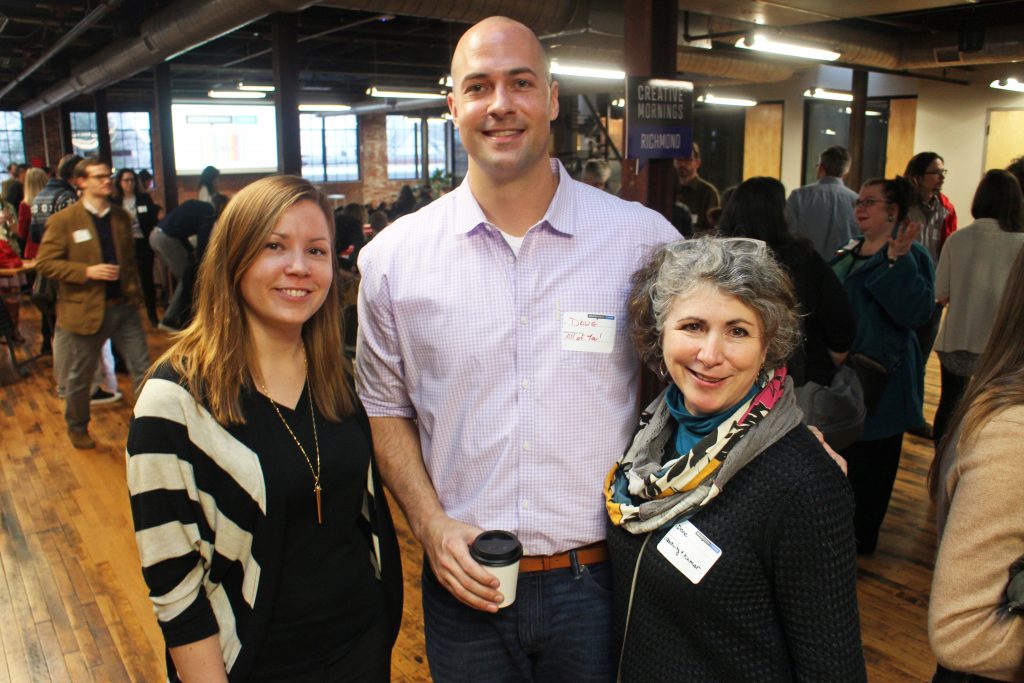 A lecture series for the creative scene that has spread from New York to more than 100 cities worldwide has landed in Richmond with the formation of a local chapter.

CreativeMornings Richmond launched in November, inviting professionals in marketing, branding and other creative pursuits to meet for breakfast once a month and hear from a local speaker on a theme chosen by different chapters.

On Friday, nearly 200 attendees filled the VCU Arts Depot for the local chapter’s second event. The featured speaker was Bill Martin, director of the Valentine Museum, who discussed the theme “Time” through a presentation of photos from the museum’s collection.

Doug Nunn, a project manager with Capital One, formed the Richmond chapter with Lauren McKnight, his sister-in-law and a marketing manager at Bankers Insurance; Diane Cook-Tench, founder of the VCU Brandcenter; and Grant Millsaps of local consulting firm The Frontier Project.

Nunn said he discovered CreativeMornings online and saw there wasn’t a chapter in Richmond, so he set out to start one. 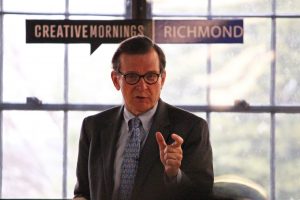 “Our creative scene here is so dynamic,” he said. “I see all these different things going on around town, and I thought we could create a nice platform for people to connect with each other.”

For the first event in November, held at The Frontier Project, Nunn and Cook-Tench got the word out by hand delivering invitations to local businesses they thought would be interested. Social media was also used, and with 120 seats available, 120 tickets were claimed within five hours, Nunn said.

“The demand is there,” said Cook-Tench, who now leads a brand and marketing coaching firm called Brandgoodness. “The cool thing is it’s going to continue to help build the creative class in the city.”

Local sponsors for Friday’s event included Capital One and Alchemy Coffee, which supplied the java and pastries. Noting the group is not-for-profit, Nunn said it is looking for additional sponsors.

The next lecture, to feature the theme “Language,” is scheduled Jan. 22. Tickets are free, but registration is required. Tickets will be available the previous Monday at 10 a.m. on the chapter’s website.

CreativeMornings was launched in 2008 in New York by Tina Roth Eisenberg, a designer. Chapters have spread to Los Angeles, Atlanta, Boston, Hong Kong, Amsterdam and elsewhere. Aspiring chapters must apply to be able to use the brand; there’s no cost to start a chapter, but groups must fund events themselves.

Like TED Talks, which spawned the local offshoot TEDxRVA, CreativeMornings chapters see videos of lectures from different chapters posted online. While targeted to professionals, the lectures are open to the general public.

Thank you for the great coverage on our growing creative speaker series! Jonathan Spiers captured all the important details so well in this article. We hope that people will register at our site so they can stay up-to-date on our monthly speakers and event partners. https://creativemornings.com/cities/rva November’s video is up with our wonderful speaker Noah Scalin, creator behind the Skull-A-Day Project, books and the firm A Limited Rebellion. Noah discusses the 10 things he’s learned about Work, last month’s theme. You can also create a profile by clicking on the drop down menu on the upper right. We’re hoping to… Read more »