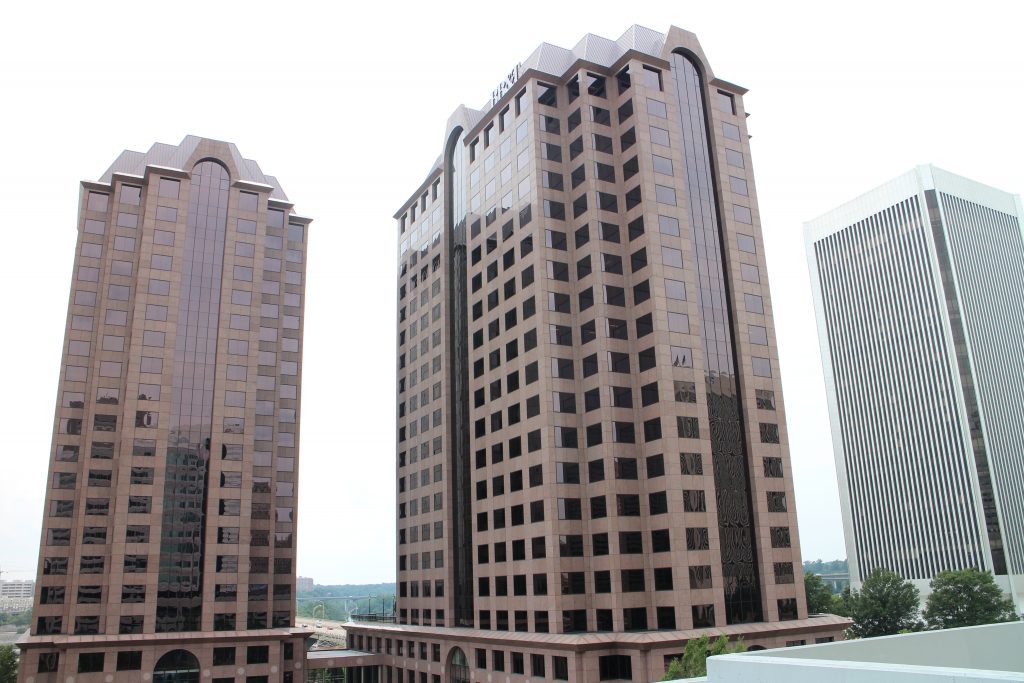 After about two months under contract, the Riverfront Plaza property has been sold. Photo by Evelyn Rupert.

The second of four huge planned downtown office tower sales is in the bag.

Riverfront Plaza, made up of twin 22-story towers at 901 E. Byrd St., was sold to California-based Hertz Investment Group for $147.5 million in a deal that closed Dec. 17.

The sale, first reported by the Times-Dispatch, follows that of Gateway Plaza, which changed hands earlier this month for $104.5 million. Those deals come ahead of the expected sales of the Bank of America Center and Williams Mullen Center, both of which are under contract.

Hertz Investment Group CEO Judah Hertz said the Riverfront Plaza deal took about 60 days to close. The two-tower property had been on the market for the past two months.

“These buildings are really great, and I thought it was a great opportunity to acquire them at a really good price,” Hertz said. “I think that Riverfront Plaza is probably the finest property in downtown Richmond.”

The towers, consisting of 970,000 square feet combined, were constructed in 1991 and cost about $300 million to build, Hertz said.

The seller was Texas-based Hines, which had owned the towers since 2006. Hines recently started a $15 million upgrade plan for Riverfront Plaza, and Hertz said his company plans to continue that work.

Riverfront has about 250,000 square feet of vacant space between its two buildings, according to numbers provided by CBRE | Richmond. That was appealing to the company, Hertz said.

“When you buy a building that’s 100 percent leased, what’s the best that can happen?” he said. “When you’re buying it at 65 percent, the best thing that can happen is it will go to 95 percent. It’s an opportunity for us.”

“Our forecast for this property is very optimistic,” Anderson said. “We think we’ve got an owner who understands the Richmond market very well and understands how they need to position their asset to be competitive in the marketplace.”

He said recent trends indicate that leasing may soon spike downtown. Employers with younger workforces want to be in that area of the city, Anderson said, rather than in the counties.

“There are certain pockets in suburban Richmond with Class-A office properties where rental rates are actually getting high enough to where we think more folks will start to look downtown,” he said. “That’s a trend we would love to see continue.”

He said CBRE does not have a quoted lease rate for Riverfront, as the price will vary depending on factors such as which floor a tenant will lease and any tenant improvements required.

The firm was founded in 1977 and owns about 20 million square feet of real estate all over the country, Hertz said, adding that it will continue to look for deals in Richmond.

“We’re very excited about the (Riverfront) deal, and I look forward to buying more buildings there,” Hertz said.