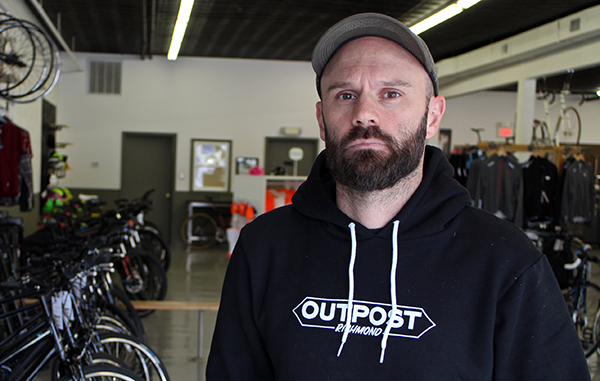 To their shopping lists of milk, eggs and bread, customers at a new store in Forest Hill can include bike lube, locks and helmets.

Outpost Richmond opened in November at 4813 Forest Hill Ave. with a two-sided business model. About half of the 5,000-square-foot sales floor functions as a full-service bike shop, with bikes, accessories and apparel for sale. The other half of Outpost is a market that sells dry goods, dairy products, eggs, meat and produce, with beer and wine on the way.

Outpost is owned by Braden Govoni, Ethan Lindbloom, and Mark North, a trio of avid cyclists who met through the local bike scene.

He said he hopes Outpost will be a shop that will be welcoming to all levels of riders.

“I wanted to move on to something a little different,” Govoni said. “I wanted something that went back to that more traditional approach.” 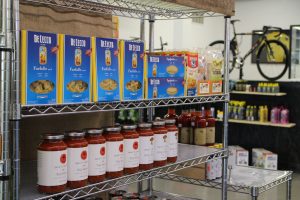 Groceries are sold alongside bike gear.

According to Govoni, North is part of the ownership entities that own The Cask Cafe property at 206 S. Robinson St. just south of the Fan, the Cartwheels and Coffee space at 2820 W. Cary St. in Carytown, and White Horse Tavern’s space at 3410 Semmes Ave.

Bikes at Outpost start at about $350 and can go up to $1,500. Govoni said the word “bike” isn’t included in the name of his shop because he doesn’t want to scare away customers intimidated about getting into cycling.

“I don’t want anyone to think we’re pretentious,” Govoni said. “We’re working really hard to combat that intimidation factor. I don’t want people to have that negative connotation.”

On the decision to add a grocery element to the story, Govoni said they knew they would be catering to a more health-conscious demographic and wanted to have some kind of food for sale. The more they looked into what they would have in stock, the more they were persuaded that Forest Hill could use a small market. Their plans were first reported by the Times-Dispatch.

“There was a genuine need for this type of grocery store in this neighborhood,” Govoni said. “We decided early on to take it seriously as part of the business model.”

Small grocers have become something of a trend in Richmond: Several have opened along East Grace Street, in Jackson Ward, Church Hill and the Fan in recent years, with others in the works.

Outpost also has nearby competition on the bike side from Coqui Cyclery at 3416 Semmes Ave.

While this is on Forest Hill Avenue, I think a lot of people might be more familiar with it being The Westover Hills Commercial Area. The Westover Hill Merchants Association would most likely be very appreciative of keeping that market naming convention.