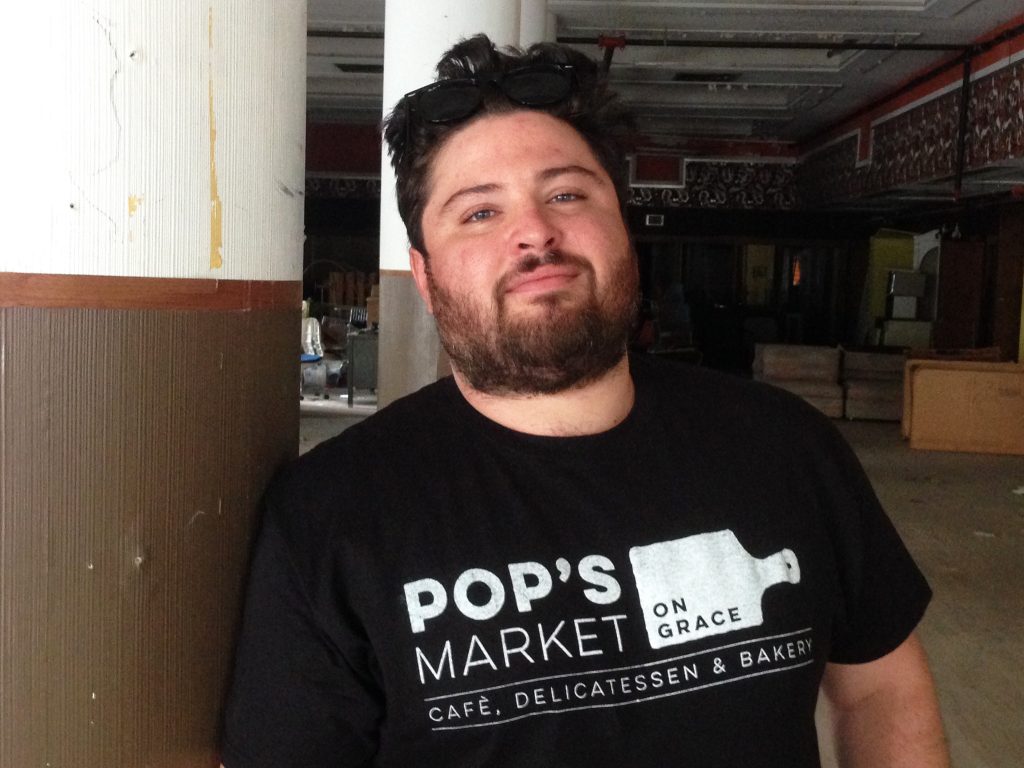 Josh Wright has a new market in the works for a long-empty space downtown. Photos by Michael Thompson.

As it continues to evolve, a stretch of downtown East Grace Street is getting a new neighborhood market.

Pop’s Market on Grace plans to open in August at 417 E. Grace St. on the ground floor of the Cokesbury building. Owner Josh Wright said he leased the 2,800-square-foot space, which has been vacant for decades but was formerly home to a bookstore.

Pop’s Market will be a cafe, deli and bakery. The menu will include coffee, bottled and draft beer, wine, meats, cheeses, produce, bread and prepared and made-to-order food. There will also be seating and a bar for those looking to dine in. Its hours are expected to be from 7:30 a.m. to 9:30 p.m.

Wright, who has lived at the Miller & Rhoads building nearby since 2009, said he hopes Pop’s will attract downtown workers looking for a bite on their way to the office.

Wright said it’s going to take about $300,000 to renovate and open Pop’s Market. His mother, retired school teacher Patti Wright, is helping him finance it and will work the front of the house. The landlord is helping fund the renovations. Will McGoogan of Cushman & Wakefield | Thalhimer handled the lease negotiations. 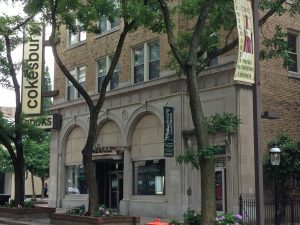 The Cokesbury building sits at East Grace and Fifth streets across from Pasture and Julep’s.

Plans are being drawn by architect Patrick Zampetti of Studio Z, and Kevin O’Leary of J.D. Lewis Construction Management is the general contractor. James Schmidt of JDS Antique Reproductions is building tables and doing the woodwork.

“We’re doing a lot of work,” Wright said. “We aim to create a creative environment.”

Between the tables and a street-facing bar, there will be 72 seats in Pop’s Market, as well as a lounge area with upholstered seating.

Wright’s new venture is one of an increasing number of businesses incrementally making the leap into the vacant storefronts along that stretch of Grace Street. Wright said he looks forward to joining the likes of the recently opened Julep’s, Rappahannock Restaurant and Pasture. Another new arrival in the neighborhood is Lucca Enoteca Pizzeria, which will open at 525 E. Grace St. on the ground floor of the Berry Burk building.

A recent count found 10 vacant storefronts on East Grace Street between First and Fourth streets. The 500 block, where Lucca Enoteca is set to open, didn’t have a single open business. Pop’s is opening next door to Centenary United Methodist Church, which Wright hopes to partner with to serve free meals to the hungry.

“We wanted to be part of the driving force of the revitalization of Grace Street,” Wright said. “It’s sad to see some of these storefronts that have gone untouched for so long.”

Pop’s won’t be the only neighborhood market opening on the street. Johnny Giavos and two partners are opening a market at 119 E. Grace St. next to Perly’s Restaurant and Delicatessen. And Saison Market is open less than a mile away in Jackson Ward.

Wright said he hopes to stand out with his bakery and pricing.

“We’re going to try to corner the bagel market in the morning,” Wright said. “There’s enough people in this neighborhood to sustain the business. With a good medium price point, they can eat there on a daily basis.”

The name Pop’s Market is in part an homage to Wright’s late father.

“He was one of the people that got me cooking in the first place,” Wright said.

Wright said he has been cooking since he was 15 years old and has had stints at Sibley’s Bar-B-Q in Chester, Awful Arthur’s, Six Burner Restaurant and Bar, Aziza’s on Main and Port O’ Call in Nags Head.

He said he visited markets in Italy, Spain and France to inform his plans for Pop’s Market. He also cited the food scenes in Chicago and New Orleans as inspiration.

“I’m drawing influences from all of them,” Wright said.

Sounds great, Josh! Thanks for investing in E. Grace St. Can’t wait to check Pop’s out!!