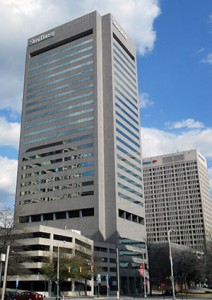 SunTrust will move its employees out of the current SunTrust Center at 919 E. Main St. in favor of the new Locks building.

Richmond has a new tower on the horizon.

A 21-story building, dubbed the Locks at 321, is in the works at the corner of 10th and East Byrd streets.

SunTrust announced this morning it will occupy 53,000 square feet of the building, moving about 200 staff members from its current tower at 919 E. Main St.

Locally-based Dominion Realty Partners is the developer. The new building, which will carry the SunTrust name, is scheduled to be completed by December of 2017.

“Richmond is an important market for us, and moving our Richmond main office to this new location reaffirms our commitment to the downtown area and the entire region,” John Stallings, SunTrust’s Virginia division president, said in a news release.

The tower will be part of the Locks, a massive multi-building redevelopment on the former site of the Reynolds North plant along the canal. Fountainhead Properties and WVS Companies began the Locks project in 2012.

Stay tuned to BizSense for more.

What happens to the old buildng?

Can you share the name of the architectural firm for the new building?

Looking at the aerials, it appears this building will replace the lowrise buildings along 10th. I think this is great as those buildings did not add much to the architecture of the site. I hope this will allow for more of a connection to the northern side of the canal along this stretch. Even if it is narrow I would like to see access along both sides of the canal. Maybe now land values will be high enough to do something with the eye sore that is the transformer yard on Brown’s Island.

Once again, Michael Campbell offers a transformative development to the Richmond skyline! His projects have been amazing and successful. If there’s ever a Richmond Real Estate HOF Michael gets charter status.

What is the latest status of this project? I would have thought the project would have started by now if the intended completion date is to be met. Can anyone provide a groundbreaking date? Any status update would be great. Thanks!