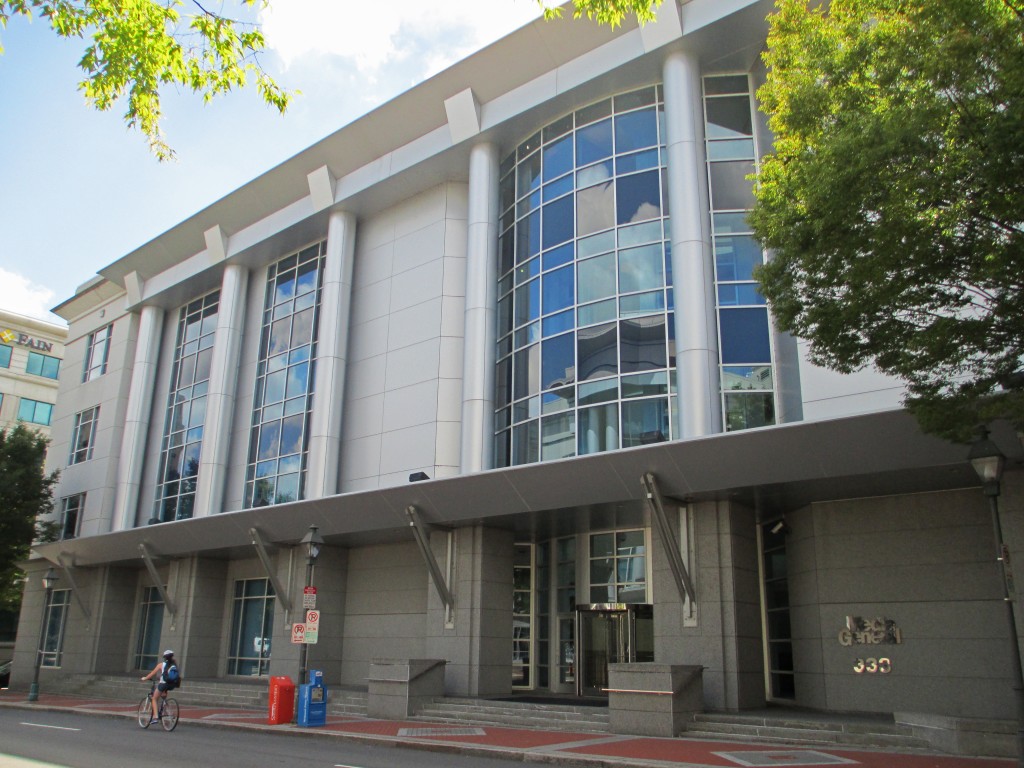 Media General is headquartered at 333 E. Franklin St., but it’s unclear if the company will maintain a presence in Richmond post-merger. Photos by Jonathan Spiers.

Media General’s months-long courtship is over.

The downtown media company announced Wednesday it will be acquired by Texas-based Nexstar Broadcasting Group in a $4.6 billion cash-and-stock deal.

The announcement followed an earlier notice that Iowa-based Meredith Corp., which had previously signed on to merge with Media General, had agreed to terminate that binding contract, clearing the way for the Nexstar deal to go through.

The combined companies will be headquartered in Nexstar’s home of Irving, Texas, according to a letter to Media General employees. Media General is currently headquartered on East Franklin Street; it’s unclear what presence, if any, the company will have in Richmond going forward or what will become of its downtown building. Media General recently sold one of its other downtown office buildings to VCU.

The two companies had previously agreed to terms for a deal but were restricted from proceeding due to the Meredith agreement. In exchange for agreeing to terminate that contract, Meredith will receive a $60 million termination fee.

Meredith can also negotiate the purchase of certain broadcast and digital assets owned by Media General, though such a purchase would require the approval of the new company, to be called Nexstar Media Group.

Nexstar will acquire all of Media General’s outstanding shares for $10.55 per share in cash and 0.1249 of a share of Nexstar Class A common stock for each Media General share. The deal also includes potential proceeds from the sale of Media General’s spectrum, or television transmission rights, in an FCC auction.

The deal values Media General at $17.14 per share, plus the value of proceeds from the sale of the spectrum. Terms agreed to Jan. 7 put the value at $17.66 per share.

According to a release, the overall offer of $4.6 billion represents a 54 percent premium over Media General’s closing share price when Nexstar first announced its bid to buy the company. That announcement came weeks after Media General had announced it would buy Meredith in a $2.4 billion cash-and-stock deal. Nexstar’s initial announced offer to buy Media General was valued at $4.1 billion.

The release included comments from Nexstar CEO Perry Sook and Media General CEO Vincent Sadusky. Sadusky said the deal “provides Media General shareholders with substantial and immediate value, as well as the opportunity to participate in the significant upside potential of the combined company.”

“Together with Nexstar, we can deliver a more comprehensive, integrated and competitive offering across all markets for the benefit of our advertisers and brands,” Sadusky said. “I am thankful for the hard work and dedication of our talented employees, and I’m confident they will continue to make many valuable contributions as part of a larger and stronger organization.”

Media General stock jumped 2 percent in premarket trade Wednesday in response to the announcement, according to a report from MarketWatch. Shares opened at $16.50 and dropped as low as $15.99 before closing at $16.19. Nexstar stock dropped 4.5 percent to $46.89 after a day high of $50.30.

While its focus has turned to broadcast and digital media in recent years, Media General has historically been a newspaper company. Its history is rooted in the Richmond Times-Dispatch, which began publishing as the Richmond Dispatch in 1850.

Media General sold the paper and most of its other print holdings in 2012 to World Media Enterprises, a subsidiary of Warren Buffet’s Berkshire Hathaway. The sale marked a shift from print to TV, with Media General amassing a portfolio of stations that today totals 71, including WRIC in Richmond.

The deal with Nexstar comes just days after the death of Media General Chairman J. Stewart Bryan III, who had served in that role since 1990.