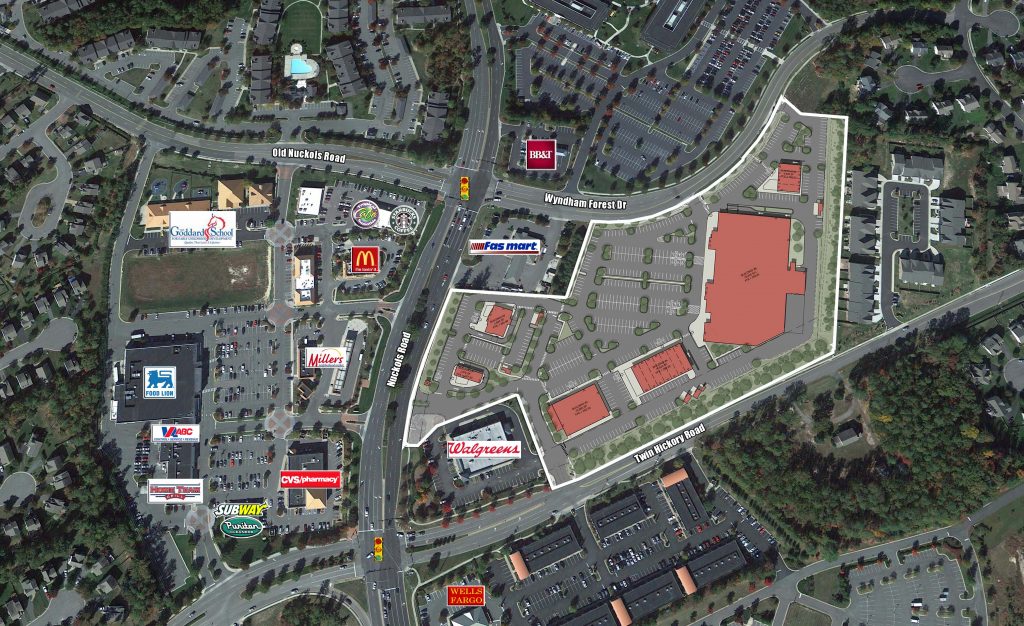 A rendering (in red) of the planned Nuckols Place Shopping Center and its surroundings.

Just when you thought there wasn’t room in Richmond for any more big grocery chains, here comes Publix.

Lakeland, Florida-based Publix Super Markets Inc. has signed on to open its first area store in the forthcoming Nuckols Place Shopping Center at 5400 Wyndham Forest Drive, near the intersection of Nuckols and Twin Hickory roads.

The chain will anchor the 100,000-square-foot development, which sits on land originally readied by Ukrop’s, prior to its sale to Martin’s. Publix also announced Monday plans to open a location in Bristol. The two stores mark the brand’s first push into Virginia.

“We’re looking at the entire state of Virginia to grow aggressively,” said Publix spokesperson Maria Brous. “Many of the residents already know Publix, the brand and our reputation, and they’ve been asking us to be part of the community for years … In the Greater Richmond area, all the pieces came together for us.”

The grocer said in a news release that it plans to open the Glen Allen store in 2018.

CBRE | Richmond broker David Crawford, who with colleague Kevin South assisted the grocer in its local search, said Publix will occupy about 49,000 square feet and has signed a long-term lease at Nuckols Place.

Crawford said Publix had been looking for a site in the area for about two years.

“Entering the Virginia market was a natural progression for them in terms of their expansion throughout the Southeastern U.S. and up to the Mid-Atlantic,” he said. “They’ve entered North Carolina, and their distribution network can handle Virginia, too.” 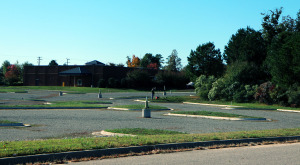 Much of the site work was completed by Ukrop’s for a store that wasn’t built. Photo by Burl Rolett.

Nuckols place is owned by Northern Virginia development group Peterson Cos. and Maryland-based Virginia Financial Investors. They bought the site last summer for $8.1 million from Ukrop’s Super Markets Inc., which had owned it since 2003.

Taylor Chess, Peterson Cos.’s president of development, said the company is excited to help bring Publix to the area and that signing the chain as the Nuckols Place anchor should push the development along.

“We’re in discussions with a lot of other tenants, and those tenants did not know that Publix is going to be the anchor, so I think that should help consummate a lot more deals,” Peterson said.

Construction on Nuckols Place will likely commence this summer, Chess said, with the first tenants opening in 2017.

Freeman Morgan is the development’s architect, while the Timmons Group is the civil engineer. A general contractor has not been selected, and Chess declined to say how much the project will cost. Cushman & Wakefield | Thalhimer’s Connie Jordan Nielsen and Alicia Farrell handle leasing for the development.

Chess said several grocery chains were interested in the Nuckols Place site, and Publix was at the top of the new owners’ list when they purchased the property in June.

Publix enters a heated local market in which incumbents Kroger, Food Lion, Walmart and Martin’s are being further challenged by the pending arrival of Wegmans and the continued push by German grocers Lidl and Aldi, which are both dotting the local map with multiple stores.

“Competition doesn’t hinder us,” said Brous, the Publix spokesperson. “For us, we always go into business in the same fashion – we’re known for our customer service, for our quality products and services. We are associate-owned and operated, so our associates have to get in the game. We’re a strong company.”

Publix operates stores in Florida, Georgia, Alabama, Tennessee, South Carolina and North Carolina. It is the largest employee-owned grocery store in the country, according to its website, operating over 1,100 locations.

I just don’t get it. Harris Tweeter would have been a better fit. Publix has no close distribution center and the market will not support other locations unless they acquire another brand. That said, Wegmans will take significant market share. It’s going to be very interesting how supermarket wars plays out here in RVA.

Wegmans is overpriced (like “Whole Paycheck”) and inconvenient for more than have the metro area. Once the new Whole Foods opens in the city not many people will drive 30 minutes extra for groceries. The Short Pump store is virtually in Goochland. It will do well but I doubt it will do more than 5% of the total market share.

As for Harris Teeter, it was bought by Kroger in 2013 and I seriously doubt they want to open a chain to complete against themselves.

I’m not sure which Wegmans you have been to, but having grown up in western NY close to the original store and shopped at most Virginia locations since the Fairfax store opened, the pricing is nothing like whole foods. It is similarly priced to Kroger but higher quality and much better customer service. There is good reason why it is repeatedly voted the number one grocery store.

Glad to see Publix come into the Nuckols Road corridor. Our only choice has been Food Lion which has limited brands and no gas perks. Between Wegman’s and Publix it will be interesting to see what happens to Martin’s. Bring on those grocery wars, the consumer will benefit.