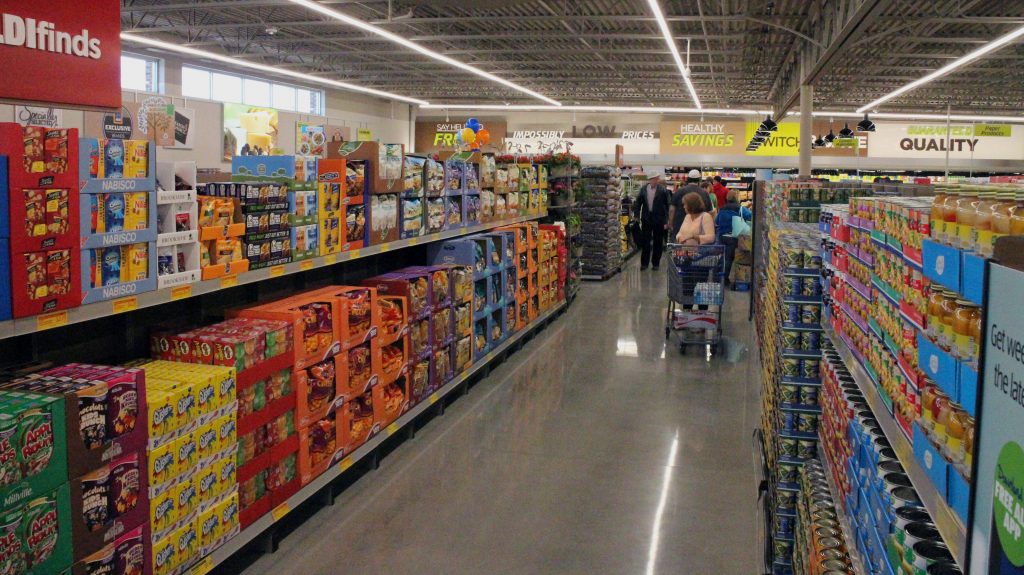 The first shoppers browse the shelves of the Parham Road Aldi at its grand opening in April. Photos by Katie Demeria.

If both plans come to fruition, only about half a mile will separate the longtime German competitors. Lidl was founded in the 1930s in Germany, and Aldi followed there about 10 years later. Both have recently ramped up their activity in Richmond. GreenGate is Lidl’s fourth planned location in the area, while this is Aldi’s 10th store in the works.

But neither grocer had made the move into Short Pump yet, and the pending locations would rise along a stretch of Broad Street that is pushing the popular retail sector’s boundaries to the west.

“We’ve been interested in Short Pump for a while, but that’s a compacted market and it’s hard to find a good retail location,” Walls said. “Now that it’s expanding west, and with Wegman’s entering the market, we were given a great opportunity by Atack.” 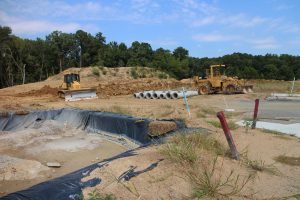 Construction is ongoing at the Broad Hill Centre development.

Aldi is under contract to purchase 2.27 acres from Atack. The land sits on the highly visible corner of West Broad Street and the planned Bon Secours Parkway, which runs through the 70-acre Broad Hill Centre development. A separate development next door, West Broad Marketplace, has landed a Wegman’s grocery store as one of its anchors.

Like most of Aldi’s other locations, the Broad Hill Centre store will be about 17,000 square feet. Walls said it is unclear when construction will start, as Aldi still has not officially closed on the land. The company has not selected a general contractor, but Walls said the architect is MS Consultants.

Aldi is in the midst of an accelerated expansion plan with intentions to open 650 stores throughout the U.S. by 2018. It recently filed plans to open another new location in Chesterfield County on Iron Bridge Road.

Lidl’s expansion into the Richmond market has been slower by comparison. Forbes reported that the company plans to open 500 stores by 2018, but so far it has plans for only three other locations in and around Richmond: on South Laburnum Avenue, Mall Drive and Staples Mill Road. Further north the company plans to open a $125 million distribution center in Spotsylvania County.

Plans recently filed with Henrico County show that Lidl would occupy a 36,000-square-foot space in GreenGate.

A Lidl representative would not comment on the new plans beyond the company’s previous statement that it is taking steps toward operation in the U.S. 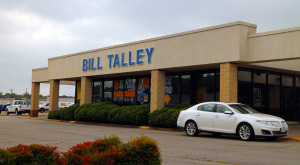 Lidl previously announced plans to build a store on the site of a Bill Talley Ford dealership. Photo by Burl Rolett.

The stores have similar business models in that both attempt to keep overhead costs low, charging for grocery bags and renting out carts. They both largely carry their own brands to avoid stocking big-name labels. Lidl locations often include a bakery sections, which is one distinguishing factor from Aldi.

When asked about the potential competition with Lidl, Walls said Aldi welcomes the challenge.

He added that Aldi is continuing to look for additional locations in Richmond but did not go into specifics.

“We still need to increase our name recognition in Richmond,” he said. “You still talk to a lot of people who don’t know what Aldi is.”

That may change soon. Walls said by the end of next year, the company plans to have enough locations so every resident in the Richmond area will be able to shop at Aldi.

“We’re trying to go wherever a good retail corridor exists, and Richmond has plenty of those,” Walls said.

Work is ongoing on the rest of Broad Hill Centre. Part of the shell for developer Steven Middleton’s 320-unit apartment complex is almost completed. Bon Secours is also planning to build a 170,000-square-foot medical park in the development.

Work has yet to start at GreenGate, but Markel | Eagle, a local private equity firm that invests in real estate, is planning to begin construction by the end of the summer. Plans show that the development should support 188,000 square feet of commercial and office space. Another 200 single-family homes and 50 townhomes will fill in the rest of GreenGate’s 75 acres.

Markel | Eagle declined to comment on the Lidl plans.