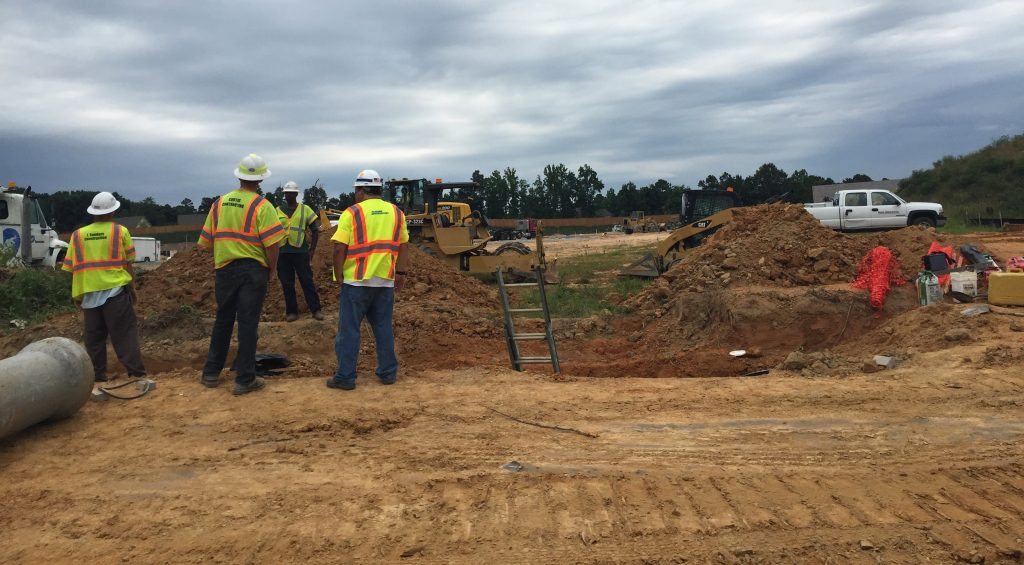 A new Wegmans is expected to open next year. Photos by Katie Demeria.

Once as stationary as its namesake, Stonehenge Village is now seeing plenty of action.

Construction on the 37-acre Chesterfield County retail development has been underway since the beginning of this year, and Wegmans, its anchor tenant, has the frame of its building nearly completed and should open in the spring of 2016.

The site for the 200,000-square-foot shopping center is located near the intersection of Walmart Way and Midlothian Turnpike. It had been in the works since the mid-1990s, but sat largely dormant until recently, when Wegmans signed on.

With the popular grocer in place to take 130,000 square feet, other tenants quickly followed.

Broker Connie Jordan Nielsen of Cushman & Wakefield | Thalhimer said she has leased out almost all the remaining space, with more deals pending.

Other tenants that have signed for a share of the remaining 71,000 square feet include La-Z-Boy, Petco, Hand and Stone, Escape Nails and Day Spa, Orange Theory Fitness, Hair Cuttery and Blaze Pizza. They should open by summer 2016. A Cheddar’s restaurant had planned to join the development, Nielsen said, but that deal fell through last year.

She said there’s only about 6,000 square feet left to lease within the forthcoming strip center. She attributes the interest in Stonehenge to both the presence of Wegmans and the current state of the retail market.

“Wegmans is a huge catalyst, but we have had the project totally teed up since 2007, and it fell through with what happened with the economy,” Nielsen said. “So what’s happening in the market now is that retail is getting active, tenants are looking for deals, and there’s not a whole heck of a lot of new construction.

“So it’s a combination of new construction and the Wegmans anchor, as well as the fact that the site has 45,000 cars a day in front of it.”

Nielsen said plans also call for four outparcels, and she’ll begin working on landing tenants for those soon. Nicki Jassy of Thalhimer is also working on leasing at Stonehenge.

Marchetti Properties is the developer of Stonehenge and delivered the Wegmans pad site to the grocer in December. Eagle Commercial Construction is building the shopping center, and
Freeman Morgan Architects did the design.

Landing Wegmans, Nielsen said, was a lengthy process. She’d been trying to bring the high-end grocer to Richmond for at least seven years.

“They’re a family-run business; they only do two to three stores a year, so every time they’d say, ‘OK we can come into Richmond,’ they’d have an opportunity pop up in Boston or someplace that was closer to home,” she said. “I think that at one point there was definitely a sensitivity to Ukrop’s being a family-run business, too, so the fact that (Ukrop’s) was sold out changed the attitude to come into the market.”

At least one other new grocer wants to set up shop near Stonehenge: German chain Lidl is looking to build a store on a site near Chesterfield Towne Center.

Is a sidewalk from the entrance of Fairways Villas on Midlothian in the plans?