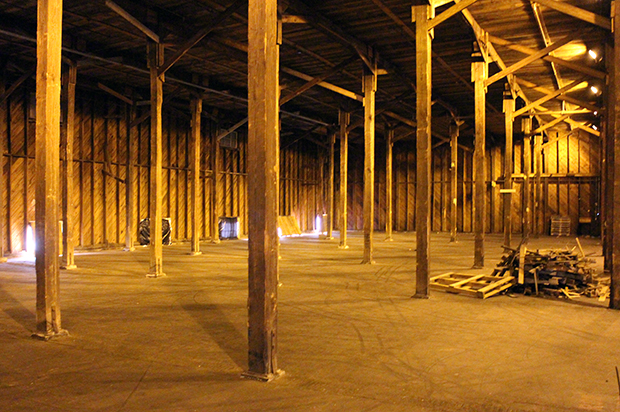 The interior of one of Clopton Siteworks’ many warehouses. Photos by Katie Demeria.

At the Downtown Development Forum earlier this month, some presenters took part in a good-natured competition, each claiming their real estate project boasted the best view of downtown Richmond.

When John Gregory of Fountainhead Properties took the stage, he had a different angle.

“We’re not part of that debate,” he said. “We’re making our own city.”

Gregory was referring to Fountainhead’s latest project in Richmond’s Southside, a 38-acre site bounded by Maury, Clopton, Decatur and East 22nd streets that features 850,000 square feet of warehouse space. Dubbed Clopton Siteworks, the project involves renovating some of the site’s 28 warehouses to create space for entrepreneurs to launch and operate businesses in a no-frills, low-rent environment. 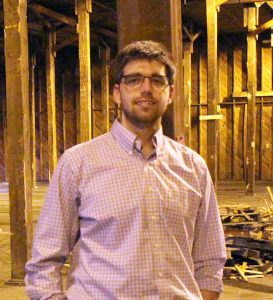 Formerly a tobacco storage complex for Philip Morris, most of the warehouses were constructed in the 1940s, city records show. Four of the buildings equaling 250,000 square feet are modern and being leased to light industrial users. The remaining buildings to be renovated are older and eligible for historic tax credits.

Fountainhead purchased the property in 2014 for $2.55 million without a specific plan in mind, Gregory said. So they leased out 28 of the warehouses for about $2,200 a month for 20,000 square feet while considering their options, expecting to receive interest from storage users.

“And so what ended up happening is we got this overwhelming flood of requests from people who wanted to have small businesses or places to make things,” he said.

That’s when Fountainhead, run by Tom Papa and Gregory’s father, Rick Gregory, decided to renovate the space to fit the needs of exactly that type of user.

While many of its projects have involved apartment rehabs, Fountainhead has some experience with leasing to entrepreneurs. Its Plant Zero project at 500 Stockton St. in Manchester leases studios to artists seeking affordable rents with more flexible lease terms.

The goal of Clopton Siteworks is to allow small businesses to move in with room to grow and build – usually literally. It already has 23 small businesses leasing space, Gregory said. Many tenants are builders, such as Chris Carlton, a woodworker who makes furniture through his company Craft and Grain, or metal grafters and recyclers. There’s also Origami Bikes, a company working to create a foldable bicycle.

The first phase of the renovation plans involves turning four warehouses into self-storage spaces. Work started in January, and the first building should open in May.

From there, the developer will immediately start on the second phase, which will include renovating four historic warehouses, creating 10 workshops at a minimum of 2,000 square feet each.

Fountainhead will keep the renovation as simple as possible, Gregory said, to allow for lower rents, which is the biggest request from current tenants. They will also build a co-working space in one of the buildings that will feature office functions for tenants to share, and to operate as a community center.

Gregory said he hopes to get the first workshop building open in the fall. The developer will then see what the demand is for deciding the future of the remaining buildings.

TK Davis is the general contractor, and Walter Parks is the architect. Gateway Bank is the lender, and Fountainhead is also pursuing historic tax credits. Each building will probably cost about $1 million to complete, so the first two phases equals about an $8 million investment.

Over time, Gregory hopes that the site’s storage and warehouse space will be a driver of blue collar jobs for those who prefer to work with their hands – positions he sees as lacking in the city.

Further in the future, Gregory said the company is also considering using some of the space for a technical school.

“We had this big downturn in 2008 and lost all these jobs, but what came back were jobs that require a college degree, white-collar jobs, and what did not come back were blue-collar jobs,” he said.

Another skill development area is apartment maintenance, a jack of all trades position created by the apartment development boom. Apartment owners are competing to recruit people into these jobs, but some entity needs to be training and developing these skills.