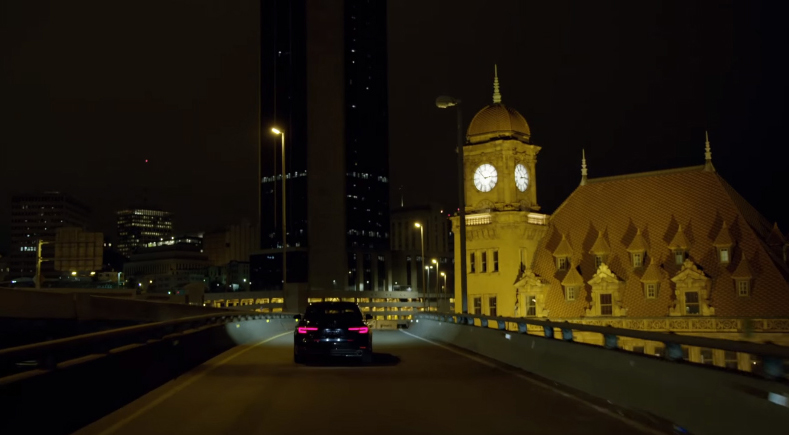 The crew shot the video at hours when the roads would be less crowded and also had police assistance to close off certain streets.

For the latest in its series of online videos for Audi, a Richmond-based production company looked to its backyard for a backdrop.

Sites around Richmond are featured prominently in a five-minute promo for the luxury car brand’s new A4 model. It was shot by local studios Park Group and Juicy Films, which are teaming up on videos for the Herndon-headquartered Audi of America.

Filmed downtown and in WCVE’s studios in Chesterfield, the video displays downtown Richmond at night and features such landmarks as Main Street Station, the Carpenter Theatre marquee and the 17th Street Farmers’ Market. 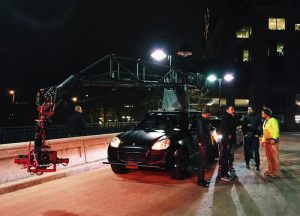 The crew used a rig called the ultimate arm to capture driving shots around the city. Courtesy Park Group.

The car – driven by Jesse Clark, a local developer who moonlights as a driver for film shoots – is seen traveling through the Downtown Expressway tunnel, under a train at Main Street Station and on the cobblestones of Shockoe Bottom. Other locations include the East Broad Street corridor, VCU, and East Cary Street beside Tobacco Row. The West Broad Audi dealership gets a plug, as well.

While Park Group has featured its hometown in other work for clients, the video for Audi – the second in a series of four or five videos that will continue through the year – is the first to showcase Richmond on such a stage, said Park Group president and executive producer Stacy Murphy-Johnson.

“We’ve done driving shoots in the past, but to be aligned with a luxury car brand such as this is an exciting new opportunity for us,” she said.

“It’s exciting to have this contract for the whole year,” she said, “and we’re hoping that, moving forward, luxury car clients could be a niche for us that we hadn’t really thought about in the past.”

Murphy-Johnson said Audi approached Park Group last year after the studio responded to a request for proposals. The first video in the contract, shot last fall, was for the 2017 Audi Q7. For the A4 shoot, the production looked local –encouraged in part by director Nick Kleczewski, a locally based filmmaker who serves as video creative director for Audi of America.

“I’ve always made the frustrating argument that Richmond has a very talented production scene that can really get any level of production in the can, if only given the chance,” Kleczewski said.

“And architecturally, it’s a really diverse city,” he said. “I’ve looked in California, New York, San Francisco, L.A. – Richmond has little mini-pockets of all those places. In fact, one of the marketing people at Audi thought it was L.A. when he first saw the footage.”

The video was shot over a span of 10 days – five at WCVE, and five on the streets of Richmond. The street shots were filmed in the early morning hours, in part to showcase the city at night but also to take advantage of fewer cars on the road. State police assisted in securing the shoot, but Kleczewski said roadblocks weren’t even necessary. 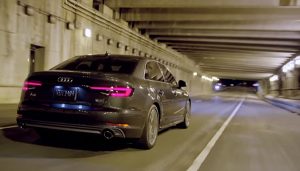 “Shooting around the city, it was amazing compared to what you would have to deal with anywhere else,” he said, referring to street closure permits and other costs that he said can add up in larger cities. “I can’t even calculate the money that was saved by not having to go through all those traditional routes.”

Murphy-Johnson said she was not allowed to say what the budget was for the shoot, though she noted a local economic impact.

“A lot of money came back to the city,” she said, adding that two or three other videos resulted from the Richmond shoot as well.

“It’s always a real pleasure to be able to keep jobs like this here, especially something as large as this, and keep all of our local guys who are equally as talented as a crew we would hire in L.A. or New York or Miami,” she said. “It was easier for us to bring the big toys in from New York and be able to shoot longer and not have to pack up everything and go elsewhere.”

One of those “toys” was a so-called “Ultimate Arm” that allows for 360-degree shots around a moving car. The camera is mounted on a chase car and swivels on a crane as it circles the subject, as it does in the Downtown Expressway tunnel shot.

Jesse Clark, the developer who is driving the car in that shot, said the production was unlike others he’s driven for since taking up precision driving for film.

“I had never seen an automotive production of this magnitude in Richmond before, and the city looks as beautiful as the A4 does,” said Clark, whose development projects include the recently approved Caldwell Park in Hanover County.

Murphy-Johnson said the car maker was very pleased with the result, which was posted on Audi’s YouTube page in March. Nine days later, the video had amassed more than 47,000 views. As of yesterday, it had more than 85,000.

The exposure also comes at a time when Audi is looking to expand its operations locally. A rezoning request before Goochland County’s planning commission this week would allow for a second Richmond Audi dealership at 12592 Broad Street Road.