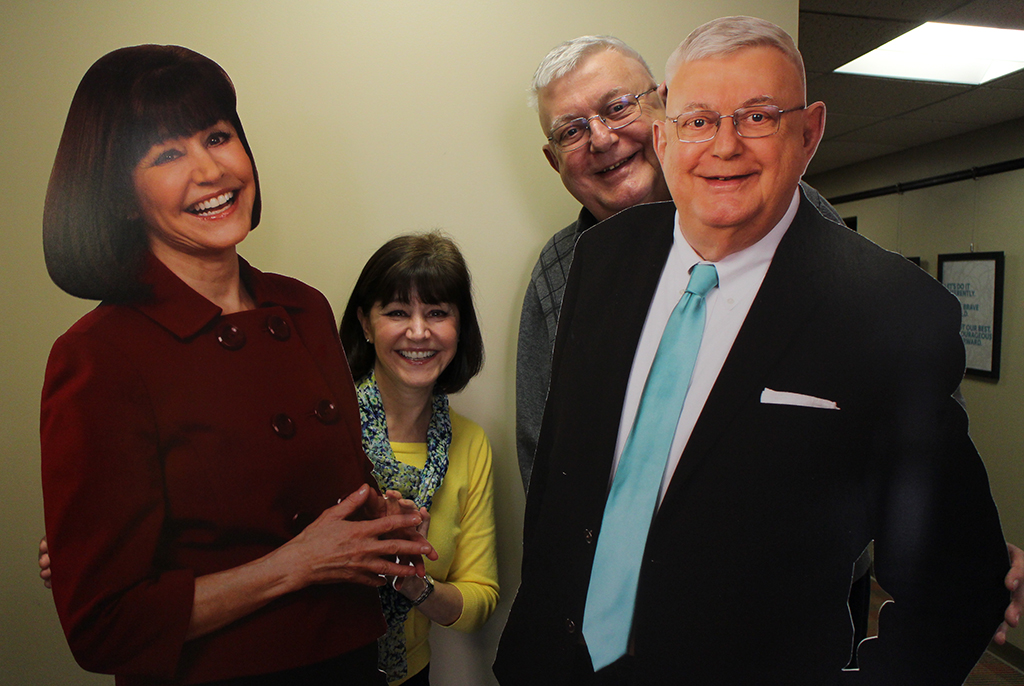 Can you tell which ones are the real Dubuque and Neathawk?

When the staff at ndp found out their agency’s founders had been named Ad Persons of the Year by the Richmond Ad Club, they had life-size cutouts made up of the duo that, for the first time in their 32-year partnership, put Susan Dubuque and Roger Neathawk at the same height.

“She’s finally as tall as I am,” Neathawk said of his more-petite partner’s picture. Looking over his own likeness, he added: “I think, actually, I’m not as tall as I really am.”

The occasion wasn’t by far the first time the pair has seen eye to eye. Three decades in the business is a testament to the firm, and after 32 years working together, the pair still laughs a lot, finishing each other’s sentences.

And this year, the agency enters a new phase as the now-named ndp – an abbreviated, lowercased version of their previous acronym, ND&P, short for Neathawk, Dubuque and Packett. The third name refers to the Roanoke-based Packett Group that the agency acquired in 2004.

The firm has also developed a new logo, “The Doodle,” which now graces its building at 1 E. Cary St., adding onto the mural that was painted last year as part of its award-winning campaign for the Virginia Museum of Fine Arts’ exhibit on the art of Japanese tattoos.

Dubuque and Neathawk sat down with Richmond BizSense to discuss their whirlwind year, their recent accolades and what lies ahead for the reimagined agency. The following is an edited transcript:

Richmond BizSense: You altered your agency’s name and introduced a new identity and logo just a week before being named Ad Persons of the Year. What prompted the change?

Susan Dubuque: First of all, when you have names like Neathawk and Dubuque, it’s a mouthful. For years, people have tripped over us. I wish we would have kept a collection of every envelope we had gotten in the mail with a very bizarre iteration of that name. So the name is very long – that’s one thing. I think many agencies around the country are similarly simplifying their names – simplifying their identities, getting away from the law-firm-style names.

The other part is, over the past three years, we’ve brought in and brought up a whole new leadership team within the organization. So it was a nice way of announcing a new day, if you will, and allowing the senior leadership group to start with a fresh, clean, fun identity.

RBS: What’s The Doodle? How did that idea come about?

SD: The Doodle is just representative of the creative process not being linear, that you really have to explore every option and use your imagination and follow lots of different paths to arrive at a correct direction. There was never one absolute selection. It’s just the process – opening minds.
Roger Neathawk: My shorthand for it is that’s the creative brain.
SD: It looks like a brain. One of our friends said if you squint your eyes, you can see a smile in it. It’s like the man in the moon. 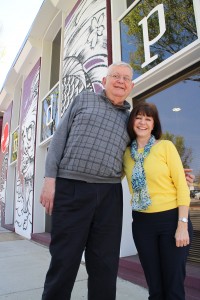 The pair in front of their downtown office, with its tattooed exterior behind them.

RBS: Tell us about your creative process. How do you foster an environment that encourages The Doodle?

SD: It varies depending on the needs of our client. We’re fast and efficient when we need to be, when our client needs it, but when we’re doing a major campaign, I think it is very intentional and very thoughtful and we dig a little deeper and really try to get inside the heads of the customer, as opposed to focusing just on the product or the service. It’s what’s really going to motivate the consumer; what do they need. I think if we can keep our eye on that ball, it helps support creative. And creative can come from anywhere.

RBS: Are there other shops in town that you hold in a particular regard or you admire their work?

RN: Well, of course, you can’t operate in Richmond, Virginia, without doing a few bows every day to The Martin Agency (laughs). I say that in a josh way, but it’s a major thing that makes advertising in this community so great.
SD: We see them as a huge asset, not a competitive force or a liability. They bring talent to town, great thinking to town; they bring resources to town that a city this size wouldn’t normally have. So we feel we’re lucky to have them.

RN: I think the other agency that comes to mind is Free Agents (Marketing). They do a lot of the same things we do; their biggest client is Bon Secours. The advertising business is extremely competitive, but it’s not cutthroat competitive. I told somebody, ‘I think Ken Wayland (FAM president) was more excited that we were named Ad Person of the Year than we were.’

RBS: What did that recognition mean for you, having been in Richmond for all these years?

RN: To be recognized by your peers is always significant, and to gain that recognition in a community like Richmond, which is so well known for its advertising.
SD: The large piece of our business that we do in the healthcare industry, we are probably better known nationally in that circle than we are in Richmond sometimes. So it’s really kind of fun to bring it home.

RBS: Did you get a sense as to why this recognition was coming to you now? Was the VMFA campaign a landmark campaign for you?

RN: It absolutely was. I think that’s the major reason that this became our year.
SD: Paint your doggone building, and see what happens!
RN: The last year’s winner introduces this year’s winner, so Moses (Foster) did the introduction, and he said: “All my staff is bugging me because we don’t have a cool building that’s painted with tattoos.”

RBS: Has there been one particular campaign that you’ve put out that you’ve been most proud of or you feel represents ndp the best?

RN: The “Buckle up Virginia” campaign is one that I continue to be most proud of. It was very early on – to be able to do a statewide campaign when you’re a small agency.
SD: A lot of the work we do for VCU is what I love. We did some wonderful, fun things for the UCI race last year: taking a sporting event and turning it on its head to really celebrate the human spirit.

RBS: Are there personal heroes you have that you would love to know how their brain works? If you could pose one question to them, who would that person be and what would you ask?

SD: I have an unusual person who I really admire, and she’s not an advertising person: Eva Teig Hardy (former Dominion executive). She’s the most amazingly powerful, quietly powerful person I think I have ever met and just gets things done.
RN: Susan turned the tables on me the other night, so I’ll turn the tables on her: I wish I had the half the energy that Susan Dubuque has. I call her the Energizer Bunny. She’ll work here about 12 hours and then go run a half-marathon after work, and then make cake pops for the staff the next day. We make a great team.