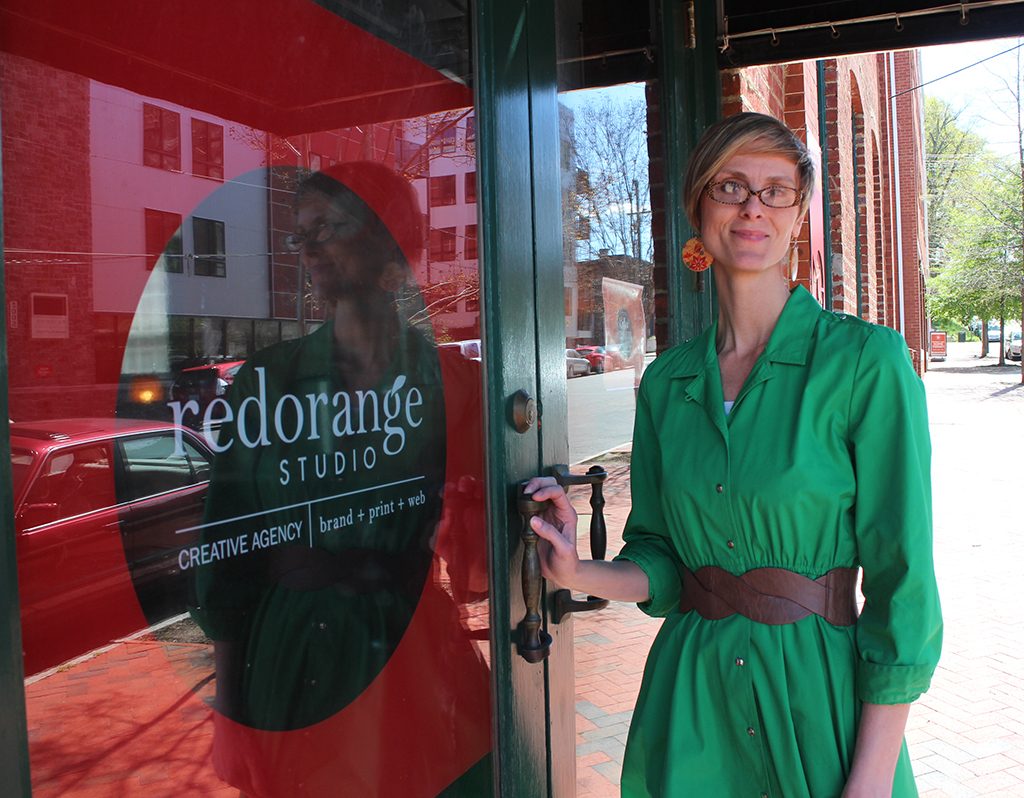 Susie Fife in front of the company’s new office in the Bottom. Photos by Jonathan Spiers.

Keeping step with its neighbor and industry peer, a recent addition to Shockoe Bottom is broadening its marketing focus with a new name and division devoted to small businesses.

The move follows the firm setting up shop in Shockoe Bottom in February, leasing a 2,500-square-foot space at 2006 E. Franklin St. that formerly housed consulting firm The Frontier Project, which relocated to Scott’s Addition.

It also follows a similar move by next-door branding agency Yogg, which launched a small-business-specific startup, Karv, just weeks after its new neighbor moved in. 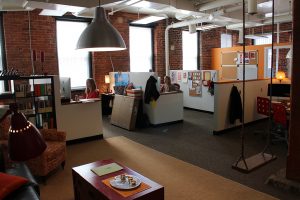 Red Orange has a staff of five.

While she was aware of Yogg founder Adam Mead’s plans for Karv, Red Orange president and creative director Susie Fife acknowledged some professional jealousy – “in a healthy way,” she said – at seeing her neighbor and sometime-collaborator roll out his version first.

Laughing, she said: “I was like, ‘Man, really?’ But his model is different from mine, and we’ve never competed against each other on a project. Even one time, he sent somebody my way, because he knew it would be a better fit.”

She said Slice is meant to offer “a slice of Red Orange,” providing package marketing services for small businesses that need less hand-holding than others. She said the agency’s top-selling packages include logo design, stationery suite and a five-page WordPress website.

“We’re getting more and more opportunities to do larger work, and it’s hard sometimes to separate who our target audience is,” she said. “I don’t want to be only small business and I don’t want to only be that large agency. I want to have hands in both.

“We want to still offer small businesses really great design, but packaged in a really efficient way,” she said, “to give them what they need to get kick-started.”

Fife said Slice also sets a stage for growth and takes a different approach to working with clients. She said its package services are an appealing option for smaller businesses, with prices ranging from $1,295 for logo design to $2,995 for a logo and website package.

Launched in 2005 in Fife’s home, the agency has grown to a staff of five and has done work for clients such as VCU, GRTC, HealthSavings.com, Sentara Healthcare and Optimum Health.

Fife started Red Orange – its name a mix of her favorite color and connotations from the fruit; think “creative juices” – after attending VCU on a basketball scholarship. The six-foot, two-inch Iowa native was also drawn to the university’s arts school, where she enrolled in design courses.

The agency moved from her home to an 800-square-foot space a couple blocks east of Carytown. The additional staff outgrew that space, prompting the move to Shockoe Bottom, where it leases its space from Secam Properties.

The agency has started a monthly networking series called Coffee and Conversations, held the second Friday of each month at its Franklin Street space. Featuring topics such as blogging, PR and marketing strategy, the series is intended for industry professionals but is open to the public. An open house is also planned for May 19.

The monthly coffees join a trend of industry networking series that have launched in recent months. Last month, nearby In Your Ear studio started a monthly music-oriented networking series, and late last year, Creative Mornings came to town with the formation of a local chapter.