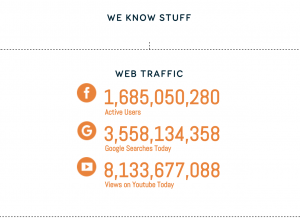 Think and WORK Labs collaborated to create and launch a new graphic identity and website for Spurrier Group, which rebranded earlier this year to reflect a broader scope of services. The agency’s newly launched website displays a real-time tally of consumer behaviors, including number of Facebook users, YouTube views and daily Google searches.

Workshop Digital collaborated with local automotive group Whitten Brothers to develop an interactive resource showcasing the oldest companies in Richmond. To make the cut, companies must have started in Richmond at least 40 years ago and retain the same core function today. The webpage includes a narrative about the city’s business history, an interactive map and list of businesses.

PadillaCRT acquired FoodMinds, a Chicago-headquartered food and nutrition communications and consulting company. The companies said the acquisition creates the third-largest food and beverage group in the country among independent agencies. FoodMinds’ clients include Nestlé, the National Cattlemen’s Beef Association as a contractor to the Beef Checkoff, and Hass Avocado Board. The latter is served by both FoodMinds and PadillaCRT, which is based in Minneapolis and has an office in Richmond.

Lythos Studios has been tapped by former city councilman Bruce Tyler for his run for Richmond mayor. The agency launched a landing page for making donations and was in the process of completing a campaign website and printing campaign materials.

The King Agency won two silver Summit Creative Awards for its work for Sentara Martha Jefferson Hospital in Charlottesville. The awards recognized two commercial spots – this one and this one – for the hospital’s orthopedics division.

Recent VCU Brandcenter graduates Jonathan Hirsch and Michael Stango worked on a national campaign for animal rights group PETA by Greenville, South Carolina-based Erwin Penland. Hirsch and Stango worked with CGI firm Hey Beautiful Jerk to create the chimpanzee image featured in the ad, which encouraged the use of CGI instead of live animals in film productions. 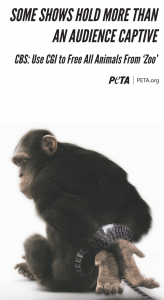 The concept, which shows the chimpanzee handcuffed with strips of film, originated at the Brandcenter in a class led by Erwin Penland’s Mike Lear, who served as an adjunct professor last year. PETA selected Hirsch and Stango’s concept among others to produce for the campaign, which appeared in the Los Angeles Times, The New York Times and The Wall Street Journal. Hirsch is now with Wieden + Kennedy in Portland, and Stango was hired by Possible in Cincinnati.

Addison Clark hired Susan “Susie” Teachey as its new full-time creative director. Teachey has over 20 years of experience in the marketing industry, most recently running her own design company. She previously worked with Addison Clark as a freelancer.

Glossy Productions hired Alex Scheer-Payne as account director. She previously worked as a brand experience manager at Release the Hounds and as a producer at The Martin Agency, where she produced work for Geico, Mentos, Colonial Williamsburg, Norwegian Cruise Lines and other clients.

Fan Free Clinic rebranded to Health Brigade with the collective pro bono efforts of Roger Neathawk of ndp, Kim Farlow of Kim Farlow Communications, Erin Bishop of EAB Research and Karen Grimm of ideaspring. The rebranding included a new logo designed by ndp. The logo features a waving flag leaning forward to represent the organization’s fighting spirit and a multicolored medical cross in the center to represent diversity of services, clients, patients, employees, volunteers and donors.

Madison+Main and partners Alliance Group and Burson-Marsteller received a Silver Anvil Award in the public affairs category from the Public Relations Society of America for their “Value Your Power” campaign for Virginia Energy Sense. The award is the first national PR award for the agency, which previously received a Bronze Telly Award for the campaign’s “Jack at Home” video.

The “Value Your Power” campaign won marketers the Silver Anvil Award from the Public Relations Society of America.

?Auxo Medical has chosen Madison+Main as its agency of record. The Richmond-based medical equipment provider and service company is expanding its marketing throughout the Mid-Atlantic and Southeast regions.

The agency is working on a new brand and website for Virginia Women’s Center, a new website for UnBoundRVA and a new logo and website for Conger LP Gas. Earlier this year, Dotted Line moved from its Gather coworking space to a new office at 9609 Gayton Road in Henrico.

J Drake Graphic Design won an American Graphic Design Award as well as a bronze Summit Creative Award for its’ work with the non profit group The National Association for Christian Recovery.