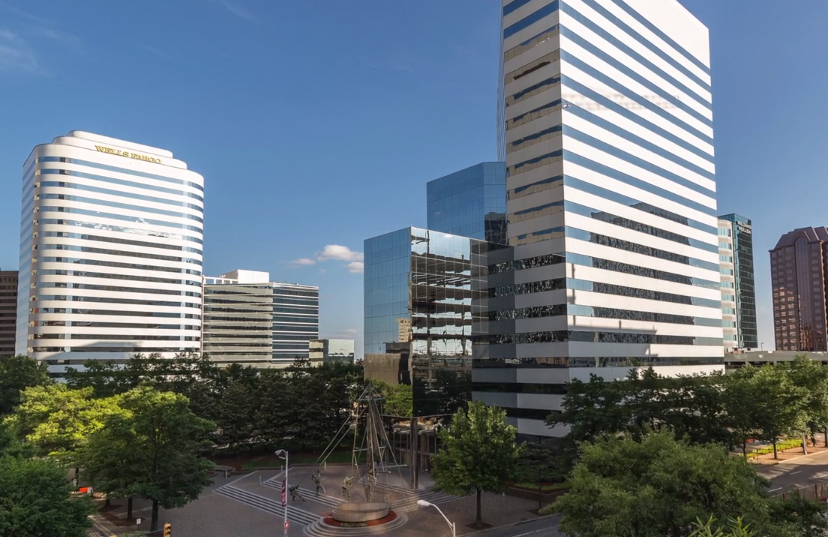 Months after narrowly avoiding foreclosure, a downtown office complex is on the hunt for a new owner.

The three-building, 1 million-square-foot James Center at 901, 1021 and 1051 E. Cary St. was listed for sale earlier this month by Holliday Fenoglio Fowler, a Pittsburgh-based brokerage that earlier this year helped land a buyer for another prominent Richmond office tower.

Marketing materials for the James Center sale recently began to be circulated. The properties are listed without an asking price.

The James Center is owned by GMACC 2006 C1 East Cary Street LLC, an entity tied to LNR Partners. LNR took control of the James Center in March in a deal that transferred the property’s deed in lieu of foreclosure. LNR did not return a request for comment on this story.

That change in ownership was a result of the James Center’s previous owner, an LLC tied to JEMB Realty of New York, defaulting on two loans totaling $150 million. JEMB had owned the James Center since 2005 after paying $184.4 million for the entire complex, according to city records. The properties were most recently assessed by the city at a total of $123.6 million. 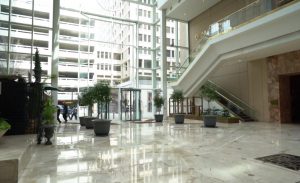 Some of the James Center’s interior space.

HFF would not comment for this story, but talk of the listing has already begun amongst local brokers.

“The whisper on the street is offers at $100 million or higher will be considered,” said Mark Douglas, a broker at Cushman & Wakefield | Thalhimer.

Douglas said there will be sizeable demand for the James Center but a deal of its size likely couldn’t be done by a local player alone.

HFF’s flyer pitches the acquisition of the James Center as a “generational opportunity.”

“Current occupancy of the property is significantly below historical occupancy, leaving investors with considerable upside potential,” the flyer reads.

Tenants at the James Center include Virginia Economic Development Partners, Connecticut General Life, and Wells Fargo Bank. Colliers International handles leasing for the James Center and did not return requests for comment on this story.

HFF’s flyer estimates that it would cost between $350 to $375 per square foot to “replace” or rebuild the James Center. That would total about $350 million.

Andrew Cook, director of research at CBRE | Richmond, said the average sales price per square foot for downtown office space in 2015 was $198 and this year the average so far is $167.

He said whoever buys the James Center is going to need more than $100 million in capital.

“It’s going to be a value-add player,” Cook said, referring to a buyer that would be willing to get in at a low price in exchange for spending money to improve the property. “That’s what the project is. They are going to have to come with sufficient capital to make improvements.”

A potential sale of the James Center would cap a business a busy period for big downtown office deals.

HFF’s flyer notes that in the last 25 months Richmond’s central business district has seen five office deals that equaled or exceeded a $40 million price tag. It found the average price per square foot in those deals has been $222.

Those deals would include: the $42 million fetched by the Bank of America Center’s 508,000 square feet in February; the 307,000-square-foot Gateway Plaza selling for $104.5 million in December; the $147.5 million sale of Riverfront Plaza’s twin towers totaling 970,000 square feet; and the $78 million sale of the Williams Mullen building, in which HFF represented the seller.

Note that the Owner is GMACC. this was a result of the Federal bailout of the banks from the Great Recession where as of December 2010 73.8% of GMAC was owned by the U.S. Treasury. The extra “C” of GMAC”C” is Cerberus Capital Management of John Snow fame (who bought out General Motors with FEDERAL money). Snow is from Richmond and was Treasury Secretary under President George Bush. Snow resigned as Treasury Secretary in disgrace after a $24 million scandal was unveiled that occurred when he was CEO of CSX Railroad in Richmond. I wonder how many other fat cats… Read more »