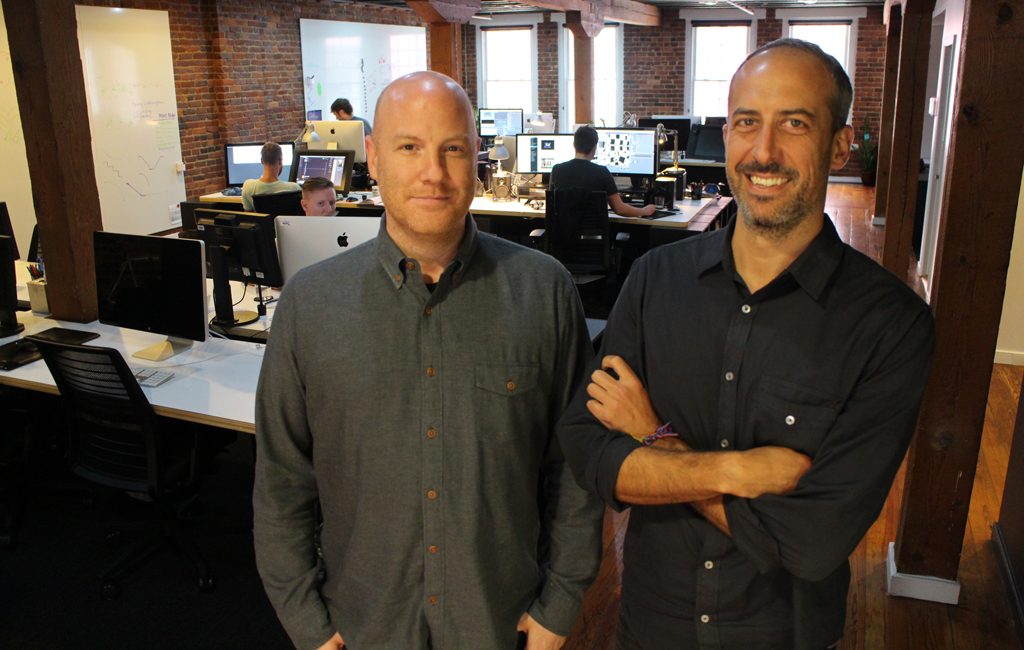 At this year’s Richmond Show, the annual awards show of the recently rebranded Advertising Club of Richmond, a name not heard at previous shows – Hue & Cry –was mentioned quite a bit as it racked up award after award in the production category.

It was the first time competing for the downtown animation and motion graphics studio, spawned three years ago from The Martin Agency. Among its take-homes: best-in-show for its “Power of a Box” campaign for humanitarian organization CARE.

Initially housed within Martin but operating as a separate, standalone entity, Hue & Cry – its name a Middle English term for a calling-out or public outcry – recently set up shop across the street, in the building that houses fellow production studio Park Group, from which Hue & Cry is subletting the 6,500-square-foot space that houses its 16 full-time employees.

The studio does work for Martin clients such as Oreo and Tic Tac, as well as its own clients, such as CARE and Creativity Online, whose stop-motion title sequence earned Hue & Cry a Pencil at the D&AD Awards in London.

BizSense sat down with Hue & Cry founder and creative director Magnus Hierta and executive producer Joe Montalbano to learn more about the studio, how it works in relation to Martin, and how they come up with the images they create. Below is an edited transcript:

Magnus Hierta: Martin Agency had some graphics capabilities – I actually came out to help them deal with that and expand that, because there’s been a change in the classic model of agency and vendor, where vendors want to be agencies, agencies want to do more production, and there’s this crossover that’s been happening. Helping them do that, I realized what they actually need is just a standalone partner that does animation and design.

Because the industries are still different in the way they operate – resourcing and scheduling and billing and bidding and all that stuff – it just made sense for us to start growing it as a self-operating entity. And then, once it became successful after a year and a half or two years, we realized we actually just need more space. To grow, we want to get other clients, so it was: let’s really turn it into a true operation and move it out.

Joe Montalbano: The more that you start bringing people that have experience within this field and combine that with people that are just raw, natural talents – you can’t contain that. At a certain point, that is going to evolve into its own thing. You have some of these groups that are doing more of these in-house capabilities – I think we grew beyond that quickly. 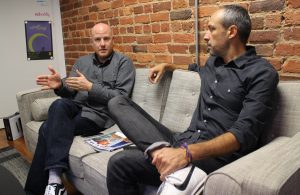 RBS: How did the two of you team up?

MH: Joe and I knew each other in L.A. Joe had his own studio for a long time with a couple other creatives that I know, and I freelanced for him once in a while. When I was out here doing this thing, it was natural to bring him on. He had a lot of that experience from the L.A. industry, and that’s what we needed here to start this. We’ve got a lot of homegrown talent – really amazing animators who are from Richmond – and then that paired with some of our industry knowhow and some other experienced people from the animation scene out there has allowed us to combine it into its own unique kind of studio.

RBS: How does Hue & Cry work in relation to Martin? Do you get most of your work from them?

MH: We actually have to win our work from them a lot. We still have to pitch, and we still have to prove that we can do it right. We don’t just get handouts from them. There’s some business that they just don’t want to take somewhere else, because we’ve developed such a great relationship, and there’s sometimes an ease-of-use factor, but then there are a lot of jobs that they still take to other vendors that we don’t get, even though we’d like them.

MH: ‘Hue and cry’ is a Middle English term that was the earliest form of messaging. If there’s a fire in your village or somebody’s robbing you, you lean out the window and start shouting that you need help or there’s a fire, sounding an alarm. That’s what the term is: to raise a hue and cry, to raise an alarm. If I look at that as a simple form of messaging that’s really clear and direct, I parallel that to what we’re doing for clients. We’re trying to create beautiful, simple messages that carry weight and speak loudly.

RBS: What’s your creative process? Are there rituals you do as a staff to get in the right mindset?

MH: One of the ways we foster a good environment and keep people thinking expansively is we’ll take half a day off and go see the new exhibit at the VMFA or something. We do Monday night movie nights, where we all pick a film that half the staff might not have seen and we’ll set up in that back room and watch them. Every few months, we’ll have one staff member do a morning presentation for half an hour or so of something they’re interested in. It can be really far-field, it can be right within our wheelhouse if it has to be, or it can be just a piece of art that they love or a technique that they’re interested in or some kind of mental exploration. So we’re always bringing in new ideas that way.

As far as our process on a job, after digesting the brief and figuring out what needs to get done, we’ll often do what we call a whiteboard session or an idea session, and we’ll get the key creative on the job and whoever else is going to be participating on it and possibly more and we’ll just start attacking the ideas. We’ll do a wide range of ideas, and then we’ll focus them in on scene ideas, conceptual ideas, transition ideas, and we’ll take all that stuff and distill it down to what we’re starting to feel really answers the brief the best, and from there we go into design development: taking a key element, a character, a type of scene or style, and we’ll start illustrating that, testing out what’s going to look right stylistically for the job.

RBS: What do you do if you’re blocked creatively?

MH: It changes no matter what the project is. Sometimes you’ve got to muscle through – you just put in the hours and really keep grinding until you break through that barrier. Other times, we’ll cut out early and go get out on the boat and hit the river for a little while.

JM: Having that balance is good, but I think both of us have an attitude of: here’s the problem; it’s not, ‘Let’s take a break and figure it out’ – you literally kind of hammer through a lot. Sometimes we probably should get on the river more and relax more, but our process and with what we’re trying to do, we both dive in and really try to figure out how to crack it as soon as possible. The longer you take, the longer that ripple effect impacts the team and your finances. Trying to be more reactive and trust your gut is probably the best way to solve problems than simmering and taking things too slow.

RBS: Are there other production houses in Richmond whose work has impressed you?

MH: I love the energy that Mondial has. I think those guys are awesome. They have a different approach, and their aesthetic is pretty tight.

JM: I’ve worked with The Branching – we’ve partnered with them on a couple projects to shoot some things locally. For music, we’ve worked with Overcoast, Black Iris, Tiny Lion.

RBS: What changes in the industry are you seeing these days?

MH: The big scare for me, for the production industry, is the changing of content from super-high-end TV commercials that you buy a big block of time for, to quick-turnaround, easy-to-produce and affordable social content. The way humans are now consuming data and information is frequent and short, so as a production vendor or animation studio, our big business challenge is not just growing with the work we have but also learning how to do some of that for clients, because a lot of clients are asking for more of that than bigger-ticket, polished animation things. How we adapt that, monetize it and still feel comfortable with what we’re doing creatively while we’re making that stuff is going to be, I think, significant for the industry.

RBS: If you could ask anyone in the industry or the world one question, who would that person be and what question would you ask?

MH: I’d love to have a working session with James Turrell. He’s a famous light artist. His ability to perceive the visual world in a way that I just cannot fathom – he bought a crater in Arizona and basically sculpted the whole interior to create viewing rooms for the sky. He’s been a constant inspiration. A lot of landscape artists are where I got my biggest inspiration from, from Robert Smithson to Watler De Maria, even Gordon Matta-Clark.