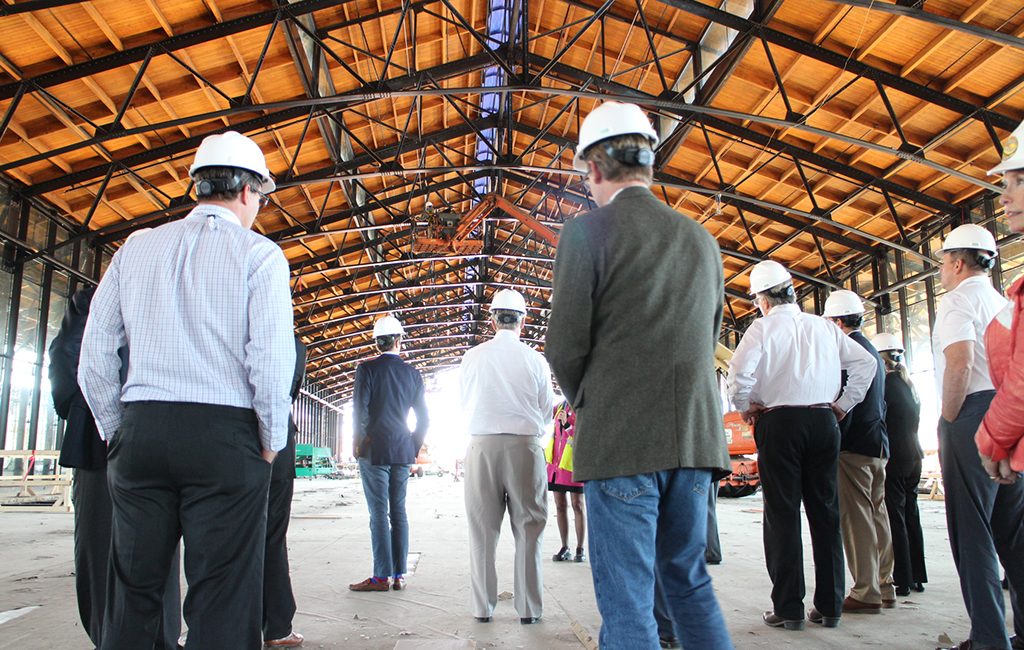 The Virginia Chapter of SIOR, the Society of Industrial and Office Realtors, held its fall meeting at the downtown train station, giving its members a chance to tour the interior construction that is restoring the 115-year-old structure.

Jeannie Welliver, who is overseeing the project for the city’s Department of Economic and Community Development, addressed the crowd to explain how the project is being funded, why it’s being done and why it’s important for the future of the city.

Welliver said the renovation is designed to have the station ready for the day when high-speed rail routes come through Richmond with routes back and forth from Washington, D.C., and into the Southeast. It’s a long-running process being studied by state and federal transportation authorities, with the idea of higher-speed trains coming in through the Richmond region through Main Street Station downtown and in the suburbs via the Staples Mill station. 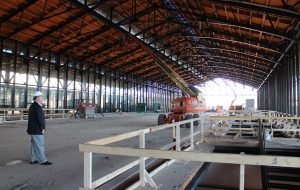 The goal is for Main Street Station and the train shed to be Richmond’s version of Union Station in D.C. and Grand Central Station in New York. Its two floors will be able to accommodate rail passengers and be a multi-modal hub for buses, cabs and bikes, complete with commercial space for eventual retail, restaurant and other complementary uses.

Welliver said it’s a vision driven largely by the city’s desire to court millennials and “how they make choices on where they’re going to live, work and raise families.”

“We have to be a city of choice,” she said. “We’re competing with every other city.”

The renovation is part of a $92 million process that began in the early ’90s to study the idea of making the station a hub. Welliver said the bulk of that has gone to construction, but also funded studies, property acquisitions, architectural drawings, restoration of the clock tower and sprucing up the parking lot across the street, as well as the heavy construction that’s ongoing.

The bulk of those purchases, along with the brunt of the construction costs, are fueled by grants funneled down from federal transportation programs.

The city bought Main Street Station, known for its clock tower, in 2004. It then bought the train shed from the state four years later.

Construction on the train shed began in September 2014 and is expected to be completed by summer 2017. 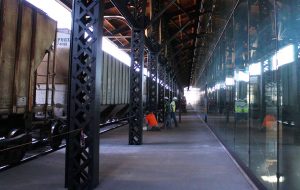 Construction began in September 2014, and is slated to finish in 2017. (Michael Schwartz)

Four Amtrak trains currently come in and out of Main Street Station each day. If and when high-speed rail lands here, 32 trains would use the station each day.

Welliver said there has been some confusion regarding federal guidelines and whether a region can have more than one station taking in high-speed trains. She said those guidelines allow for the coexistence of Main Street Station and the Staples Mill station, which currently gets four times the amount of passenger train traffic each day.

She said the plan for Main Street Station carefully took into account the federal guidelines and it will be ready when the trains come rolling in.

“We’ve already built our train station,” she said. “It’s in the right place.”

As someone who uses the train frequently, it would be more convenient if passenger trains were running to and from the south from Main Street Station.

I’d likely use it twice as much.

I was going to make the same comment Brian. Glad you corrected that commonly-used misnomer of a New York City treasure.

Can someone calculate how much federal, state, and local money has been spent on Main Street Station since the 1970’s vs. how much traffic it has ever generated? I think it has had at least 2 multi-million dollar renovations, including retail build outs with little to no return. When will Richmond stop being drawn in to bad projects with partial federal money used as bait!

Who’s working on the plan for light rail from Short Pump – Downtown – Airport? Richmond has become a desirable city, a serous light rail system will catapult us into the big time.

In short no one is working on it. We just got a BRT system, and there was enough backlash from that project. Plus what you are talking about would require the Henrico to put up a lot of money for a project like this, and I don’t think they have a huge interest in public transportation. Their resistance to the BRT line shows that. Also public transportation to Short Pump would be last on my list for what Richmond needs. Better infrastructure WITHIN the city to increase the residents mobility is what is needed. Not another opportunity for Richmond residents… Read more »

This is a bit silly, but it’s been bugging me: So, a few weeks ago I noticed the lighting in the upper portion (clerestory?) of the train shed for the first time. I thought I saw the lights changing colors,but lately they just seems to be blue? Did I imagine that the first time…? (Also thought that would be an interesting place for some sort of message display/ticker, depending on the lighting system they installed!)

Lee, I attended this function and the staff giving the tour told us that the color of the lights can change for various events.

Let’s be factual…. BRT , also know as Bus Rapid Transit, or The Pulse is working on phase one. If phase one is successful phase two is contemplated to possibly be extended to Short pump. Henrico County , to my knowledge its Chesterfield County that hasn’t been a proponent of public transportation, not Henrico County. As for Main Street Station, without a parking deck the project, in my opinion fails, not only for train traffic, but also as a tourist information center destination, which was touted by the City from the get go. NOTE: Amtrak and the Commonwealth have purchased… Read more »