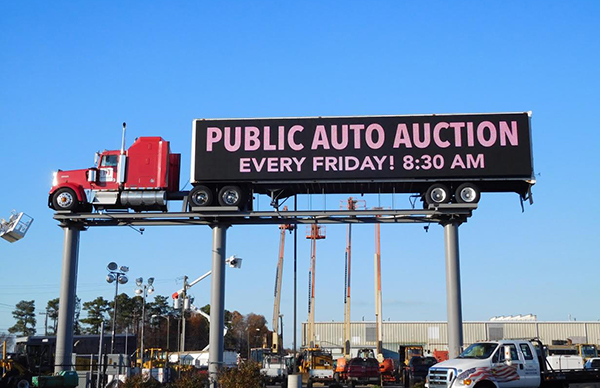 The structure was erected in 2004 beside I-95 northbound. (Courtesy Motley’s)

As if a tractor-trailer perched atop steel pylons wasn’t enough of an eye-catcher, the local auction house it advertises along Interstate 95 has added more reason for travelers to turn their heads.

Motley’s Asset Disposition Group recently installed a digital billboard-style sign to the sides of the 18-wheeler that towers above its corporate headquarters and auction complex along the interstate south of Richmond. The new sign is advertising auctions and displaying animated messages for holidays and events.

President Mark Motley said the sign was a given for a structure that’s been catching eyes since it was erected in 2004.

“We’re in the marketing business. We market and advertise a variety of assets for our clients, and we felt this would really give us an opportunity to promote that to the highest extent with 100,000 vehicles driving by each day,” Motley said. “We thought it was a great opportunity to try to seize that moment.”

While a billboard in style, Motley said the sign would be used only for promotional use and not leased out for advertisements for other companies.

The red tractor-trailer, complete with illuminated headlights, stands out among the billboards that line I-95 northbound. The truck was originally among the various items at Motley’s auctions at its complex at 3600 Deepwater Terminal Road. It previously displayed a fixed sign for the company, whose auctions range from vehicles to industrial equipment and real estate.

“A lot of people don’t think it’s a real truck,” Motley said. “We actually drove that truck to the site, and then we started taking the parts out and reducing the weight of it. But it was a drivable, workable truck.” 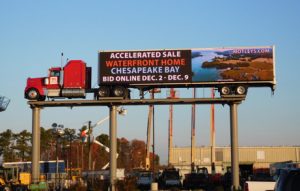 Motley invested $250,000 in the digital upgrade to its tractor-trailer display. (Courtesy Motley’s)

While the original structure cost about $70,000, Motley said the addition of the digital sign and related electrical and reinforcement work was a $250,000 investment, including a refurbishment when the truck was taken down two years ago for a cleaning and repainting.

Local firm W.O. Grubb provided the crane for both efforts, and Motley said the electrical work was done by Gabe Francis of Francis Electric. The sign was installed by Chesterfield-based Superior Signs.

Motley said the investment appears to be paying off since the sign went up in late October.

“If you put your finger on a return of investment, which is fairly hard to do with marketing and advertising, we’ve gotten a little bit of a feel that it’s making a difference, which we find is of course not only positive for us but positive for our clients,” Motley said.

Motley is the second generation of his family to run the company, which was started in 1967 by his parents Dick and Pokey Motley in a dairy barn in Chester. More recently, the auction house was headquartered at 4402 W. Broad St., which it vacated to make way for a since-scratched Pleasants Hardware store.

The company moved to its current location in 2014. Earlier this year, it purchased a 330,000-square-foot warehouse facility just down Deepwater Terminal Road from its 30,000-square-foot headquarters and auction house, where it holds Friday auto auctions and houses other divisions including appraisals and business and estate liquidations.