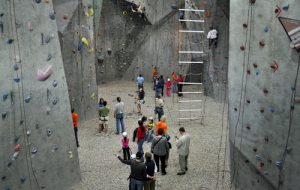 An indoor sports facility near The Diamond has struck a deal to take its $2.5 million expansion plan to new heights and bring a niche Southside gym across the river.

Peak Experiences will erect rock climbing walls in a 15,000-square-foot section of an existing steel building at SCOR, which is increasing the size of the complex by 30 percent by adding a new 50,000-square-foot steel building that will house two-and-a-half turf fields, along with new party and reception areas and a cover on its existing outdoor field.

The new rock gym will be a sister site to Peak Experiences’ original location, which opened in 1998 with 15,000 square feet at 11421 Polo Circle in Midlothian, behind the Shoppes at Bellgrade.

SCOR owner Mark Grossman said the new amenity will complement the facility’s offerings, including its turf fields, which host soccer leagues and other sports, its sports bar and party areas.

The idea to expand Peak Experiences into the city is years in the making, and the two companies first talked about it 10 years ago. 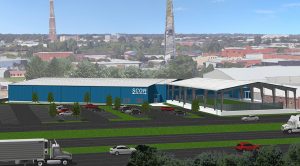 A rendering of the upcoming 50,000-square-foot steel building at SCOR.

Grossman had just purchased the property and gave Peak Experiences founder Scott Powell a tour of the site, thinking at the time it could someday work for a climbing gym.

“We walked that property and both of us got excited,” Powell said. “Unfortunately, 10 years ago, the feedback was Richmond wasn’t ready for a second climbing gym.”

Powell said he and co-owners Jay Smith, Casey Cockerham and Kevin Tobin decided two years ago to seriously look at coming across the river, but still had to find the right site.

Enter Mother Nature, who sped up the decision by blasting Richmond with a major snowstorm in January, which collapsed SCOR’s nearly 10-year-old, 31,000-square-foot inflatable dome.

That cleared the path for Grossman to expand SCOR’s campus, building the new steel structure where the dome once stood and freeing up space for Peak Experiences in the existing building.

“I’ve always held on to this dream that I would kill to put a gym at this location,” Powell said. “It was divine intervention; a few months later a giant winter storm came in and took out the dome.”

Powell and Smith said SCOR’s location puts them in a sweet spot to reach their industry’s coveted demographic.

“The trend in the industry is particularly to go after the younger college and right-out-of-college market,” Smith said. “With the incredible growth of the city, Scott’s Addition and downtown, that’s where our target market is.”

Powell and Smith said they are confident, from the Midlothian gym’s popularity, that the demand is there for a second location. 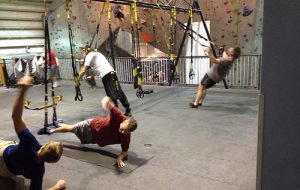 “Back then on the East Coast, climbing gyms were unique or considered on the fringe,” Powell said. “We pretty much hit or exceeded our revenue targets every single year and the industry as a whole has taken off. It’s become very mainstream.”

Added Smith: “There are folks waiting in line and – not in a bad way – it’s busy. We knew there was room to grow.”

Peak Experiences is leasing the SCOR space and will pay to construct the rock walls, with an option to add 6,500 square feet as demand warrants. The company declined to say how much the new facility will cost.

It’s in negotiations with companies that will build and install the climbing walls, and expect to have 25,000 square feet of climbing surface that will rise up to 50 feet.

They’ll look to open in late spring or early summer, contingent upon completion of the new SCOR building.

On SCOR’s end, Grossman said he hopes to be able to move all scheduled outdoor games indoors by the end of January.

Despite being down a field, SCOR has remained open since the dome collapse.

Grossman said he’s offered things like free hot chocolate to thank the players and spectators that have been forced to play on the outdoor fields as the temperatures have dropped.

“I just cannot believe how patient people are with us and how understanding they’ve been,” he said.