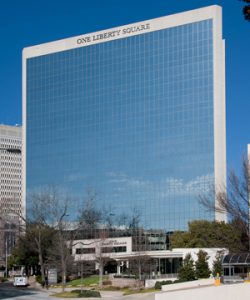 One Liberty Square is a 17-story building with nearly 250,000 square feet of office space. (Courtesy Lingerfelt)

After selling off one of its Florida assets earlier this month, a Henrico-based real estate firm put more money to work and snatched up a pair of office towers in upstate South Carolina.

The company would not disclose the sales price and Greenville County real estate records did not reflect the sale.

A fair market valuation of One Liberty Square, a 17-story building with nearly 250,000 square feet of office space, was around $20 million, according to tax records. Its taxable market value was around $18.2 million.

Two Liberty Square, a 12-story tower with about 186,000 square feet of office space, posted similar fair and taxable market values as its sister property, according to county tax records, at around $21 million and $19.3 million, respectively.

One and Two Liberty Square were constructed in 1983 and 1986, respectively, and renovated in 2006 and 2014, said Ryan Lingerfelt, President and Chief Investment Officer at Lingerfelt Commonwealth. 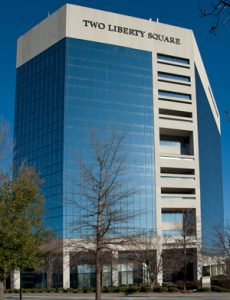 Two Liberty Square is a 12-story tower with about 186,000 square feet of office space. (Courtesy Lingerfelt)

The two buildings are posting a combined 81 percent occupancy rate. That’s expected to drop to around 70 percent, once a 50,000-square-foot user vacates its space.

Lingerfelt said despite losing a large tenant, the vacated space will position his firm to fill the space quicker given downtown Greenville’s tightening office market, and the towers’ desirable location.

“The Liberty Square acquisition fits perfectly within our value-added strategy of acquiring high-quality real estate in strong secondary and tertiary markets like Greenville,” Lingerfelt said in a prepared statement.

Lingerfelt CommonWealth’s recent acquisition in the Palmetto State is the latest in a stream of transactions the company completed this year.

In July, the firm purchased the 10-story, nearly 200,000-square-foot Stein Mart Building in Jacksonville for $26.62 million – directly across the street from Riverplace Tower.

The company also was part of a joint venture that took over an office building in Nashville for $74 million. Closer to Richmond, Lingerfelt paid $15.6 million for a retail development in Chesapeake. Both of those deals were announced in May.

In Richmond, Lingerfelt has a sizable portfolio of offices around Innsbrook and the nearby Marriott hotel. The firm is also the development arm behind the West Creek Medical Park in Goochland County, which is expanding to accommodate new medical tenants.

The seller in the Greenville deals was Atlanta-based Hb Liberty Square, which acquired the two office towers in 2013, according to tax records.

While Lingerfelt will manage the two properties, CBRE will continue to handle the leasing and marketing of One and Two Liberty Square.