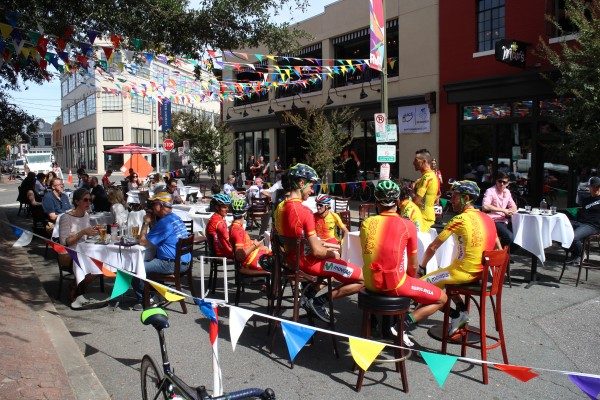 Riders in an extended sidewalk dining area during the Richmond 2015 event. (Mike Platania)

The four-day race event was planned to take place throughout Virginia, with Richmond slated to be a primary host city. It also was expected to impact tourism and the economy comparably to the 2015 event.

Local merchants had mixed reviews of the 2015 race’s affect on business, while at least one study estimated it generated $23 million in economic impact. But some merchants bemoaned the event, saying road closures and other restrictions hurt business.

Miller, who was COO of Richmond 2015 – the nonprofit that organized the Road World Championships – led the effort to plan the Commonwealth Cycling Classic through RPM Events Group, a company Miller helped form and has since left.

Miller sat down with BizSense to talk about what led to the event’s cancellation, where funding would have come from, and whether he thinks Richmond will host another bike race in the future. The following is an edited transcript: 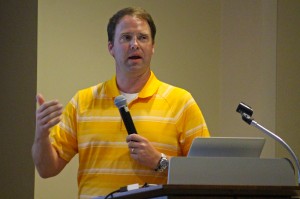 Richmond BizSense: What was the biggest factor that led you to call off the event?

Tim Miller: Ultimately, it really came down to bad timing. I’m very careful because people keep wanting me to pin this on Mayor Levar Stoney, and it’s not on him. But the mayoral election contributed to the overall bad timing of when we were doing this.

The fact that Mayor (Dwight) Jones was on his way out and Mayor Stoney was on his way in, and no one could commit to it, was a contributing factor. But the last thing I’d do is blame this on Levar. He’s got some serious challenges he’s trying to work through at City Hall, and this is not a high enough priority. And I agree with that. He’s got to focus on schools, core services, and getting things turned around at City Hall before he can worry about this.

RBS: Was sponsorship or funding an issue that led to the cancellation?

TM: To be honest, we didn’t get to the point of looking at that. We had a lot of meetings with potential sponsors, and by and large, most of them said, “Yes, we’re going to support it in some way, shape or form, but come back to us with some kind of solid plan.” We never got to that point.

RBS: How soon after the 2015 UCI Road World Championships did planning for this begin?

TM: Almost immediately. There were several iterations that we put through. We saw a couple of opportunities following the success of the Worlds, and the – I don’t want to say “need” – but the need for a legacy event as a follow-up to the World Championships.

We talked about it and figured we’d give it a go. There was skepticism until the first race in 2015 started. It wasn’t until we got into it that those skeptics started saying, “Wow, this is the real deal.” If 2015 hadn’t been as successful as it was, I don’t think we’d have ventured down this road. It was too hard.

RBS: What was RPM Events Group’s involvement in the planning?

TM: We (initially) had a major investor that was going to back the first version of the event that backed out at the eleventh hour. There was a verbal agreement, and then lawyers got involved, and then things got crazy. That was about a year ago, in spring 2016. Then, very briefly, a group of locals including myself tried to think of how we’d do it on our own, and pretty quickly learned it wasn’t going to work.

In late June, this other Colorado-based group came forward. They’d sort of been on the periphery of our first effort, sort of watching from the sidelines. When it didn’t work out, they started looking and seeing if they could jump in. They thought they had the ability to raise the equity to get it started. Then we said, “Let’s do it.”

They went out and raised $6 million in equity, and we formed RPM Events Group. We officially launched in September. We’d have the Colorado race and the Virginia race, with the idea to build it into a much broader series, but we’d start with those and work out the kinks.

RBS: How did you plan to make money on the race?

TM: Diversifying our revenue streams was big. Sponsorships are a big part, but so is municipal funding. Each host city would have to contribute a modest amount of cash, plus city services like police, public works – all that. That was an important part of it. Any time we’d hear pushback, we’d say, “Wait a minute, no one’s benefitting more than these host cities with the economic impact, the global exposure and the tax revenue.”

Then you have the idea of ticket revenue. The big idea with RPM was to combine the bike race with a broader music festival of sorts. We wanted to integrate a fairly significant concert at the conclusion of the event. The argument I kept making was, if we’re doing concerts, they have to be concerts that really are going to draw people.

RBS: So Richmond was going to be the “hub” of the race?

TM: I wouldn’t say hub, but it’d be the finish venue. I made the argument that if part of our revenue strategy is getting money from different municipalities, we have to go there and stay there in order for them to justify the investment.

RBS: Did you get good feedback from Mayor Stoney on the event?

TM: I don’t want to put words in his mouth, but there was interest on their part to make this happen. In fact, there’s already been some hinting at some desire to talk about 2018. Where all that goes, I don’t know.

In other words, Stoney wasn’t going to put up the money because that wouldn’t be a good look with the city having potholes, broke down schools, inefficient services etc. The UCI Bike Race in 2015 was a lot of fun and Richmond looked great on TV but that money could’ve gone into improving city resources and services.