While the ripple effect from the bike race got off to a quiet start this week, local businesses have been busy taking part in the festivities, with others trying to take advantage of the visitors the event is projected to attract – particularly in the final few days.

A fan zone for state employees was set up in the Madison Building plaza. The building, which has views of the race route on Governor Street, featured entertainment and food trucks, a portion of proceeds from which raised funds for charities including ChildFund International – the official charity of the bike race.

Several businesses have planned company outings to watch the race. Among them is 3north, a Manchester architecture firm, which planned an office field trip across the river on Friday. Earlier in the week, the staff further celebrated the event with several bike-themed activities, including a tricycle race and an after-work bike ride.

Many local businesses are among the exhibitors featured in the event’s FanFest in the Greater Richmond Convention Center. Genworth, CarMax and the Virginia tourism office have setups that stand out among the large exhibit hall, which also featured tables for Shockoe Denim, Manassas-based Monument Coffee Roasters and other businesses. 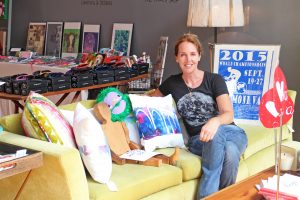 Tyler Snidow of Viva-la-Local has a booth at FanFest and is also operating one of several temporary retail stores that have sprouted downtown during race week.

Snidow is sub-leasing the 3,400-square-foot space at 318 W. Broad St. The location is normally the headquarters for software firm Websmith Group, but during the bike race visitors will find art, jewelry, apparel and other Virginia-made goods for sale.

Snidow said she’s selling her goods on consignment and makes her money on a mark-up of the products for sale. A best seller has been a $30 screen-printed poster with a bike race theme.

She said she hasn’t yet turned a profit on the temporary venture but is hopeful with a few days of races remaining. The elite road circuit races are this weekend, and the Conquer the Cobbles ride is expected to likewise draw increasing crowds.

“I’m an optimist,” Snidow said. “The energy and sales have grown throughout the week.”

Pop Secret has 30 vendors, mostly from Richmond, who had to apply to be part of the venture. Bizarre Market takes a 30 percent cut of the sales and is run by Bird Cox, Lefton’s wife.

“We didn’t know what to expect,” Lefton said of sales. “There’s been a buildup over the course of the week.” 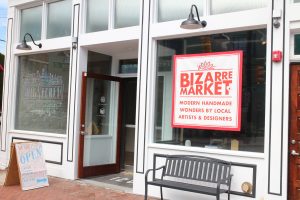 Elsewhere along Broad Street, near the races’ start and finish line, Coda Urban Bistro and the Richmond Marriott took their business to the streets, setting up to-go and concessions stands on the sidewalk. The Coda To-Go stand sold grab-and-go sandwiches and snacks, while the Marriott’s setup sold Starbucks coffee and included dining tables.

Farther up Broad, other businesses placed sandwich boards outside their storefronts to attract passers-by. Max’s on Broad took advantage of the closed-off area in front of the restaurant with additional dining tables, all of which were filled during lunch on Thursday, following that morning’s road circuit training.

Liz Kincaid, general manager of Max’s on Broad and Tarrant’s, was happy with the outcome of the outdoor dining strategy on Thursday, but she said business earlier in the week had been down considerably.

“It’s been difficult for the staff. We expected it to be busier,” she said. “We were hoping our business would double this, but it didn’t.”

Kincaid said restaurant regulars and catering clients were scarce this week, but she said out-of-town diners have been a welcome sight.

“We’re lucky to have our European visitors,” she said.

Pop Up Revolution, organized by Michael Sparks of Michael Sparks Design Firm and Underground Kitchen, also has gathered retailers during the race at two storefronts on the 300 block of East Broad Street, as well as at Plant Zero in Manchester. 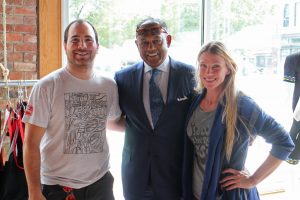 Elize DeBoom of Colorado-based Endurance Conspiracy and Julian Andretta of Gita Sporting Goods teamed up to sell T-shirts and cycling apparel in a space at East Broad and North Second streets. They began selling Sept. 24, six days after the start of the race.

The venture was part of an effort organized by the nonprofit Storefront for Community Design to get retailers in vacant storefronts owned by Washington, D.C.- based Douglas Development. Douglas owns swaths of downtown real estate, including the Central National Bank building.

DeBoom and Andretta said they hope their shop will encourage others to do business downtown.

“Hopefully we’ll be doing this spot justice and someone will see it and say, ‘Oh! I want to open there,” DeBoom said.

Mayor Dwight Jones stopped by the Douglas-owned storefronts yesterday to peruse the retail efforts taking place downtown. He said retail is the next step for the area’s long-term development.

“The shops and so forth are going to follow what we’re doing with housing and redevelopment,” Jones said. “The next move is retail.”

Jones said initiatives like the new Quirk Hotel at 201 W. Broad St., the ongoing rehab of the Central National Bank building into 200 apartments, and the VCU Police Department’s move to 224 E. Broad St. are anchors that will spawn ancillary development.

“As long as you have anchors bridging in between, the buildings will fill in,” Jones said.

Jonathan Spiers contributed to this report.