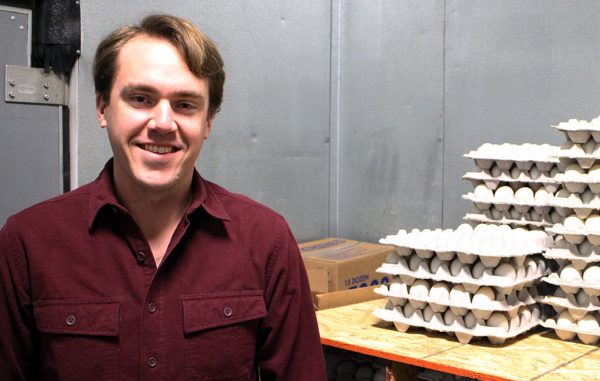 Most entrepreneurs need people to get their startups going. The Risser family needed a workforce of a different sort to launch their Henrico-based business: 10,000 ducks.

Leaning on Ken’s 30 years of experience in the poultry production and sales industry, Kort said they hatched the idea after noticing the popularity of organic, cage-free and pasture-raised eggs, and then seeing a carton of duck eggs on a Whole Foods shelf.

“We think the specialty egg market is the next big thing in the egg case,” Kort said. “We think the next step is duck or quail eggs.”

The company leased a cage-free, 120,000-square-foot farm in Cumberland County, and bought a flock of ducklings from a hatchery in Pennsylvania. Its office and packaging facility is at a 3,000-square-foot office space at 5737 Charles City Circle in Sandston.

Now that the ducks are of age, production is in full swing. Risser said the company’s ducks lay an egg every 24 to 36 hours, and it already has sold roughly 50,000 eggs in 2017.

Duck Duck eggs are available at Ellwood Thompson’s and Tom Leonard’s, and through local distributor Loving’s Produce Company. Risser said last week the company closed a deal to sell eggs in all of Harris Teeter’s 240 locations along the East Coast.

“We’d love to get into places like Whole Foods, Wegmans or Publix,” Risser said. “There’s no one else going after the duck egg market commercially; no one’s selling duck eggs at this level.”

The eggs are comparable in size to a chicken egg, and Duck Duck does not bleach the shells, leaving them in their natural white, brown or sometimes spotted green or blue color.

Risser said duck eggs can be used like chicken eggs, but stand out in one way: “Duck eggs are much better in baked goods. They’re more nutrient-dense and richer in flavor.”

Duck Duck Eggs is privately held by the Rissers. Kort previously worked at a local country club after getting a degree in biochemistry from VCU. Kolt still works full-time at Capital One.

They employ one full-time farm attendant who collects the eggs, which are cleaned and packaged at the Sandston facility.

Risser did not disclose how much the family invested in the business.

I remember a woman named Duck Egg Lucy from 20 years ago, last duck egg merchant I knew of in Richmond.