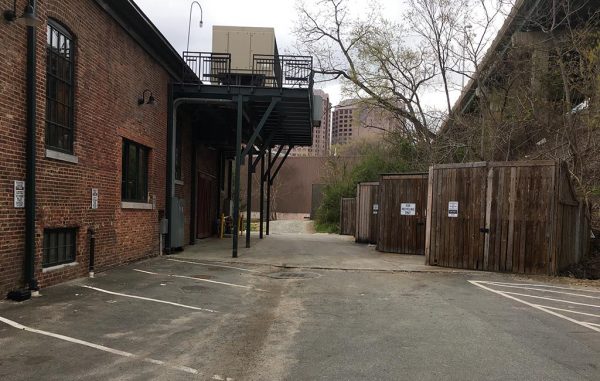 NFA claims the parking spaces (left), dumpsters (right) and the above HVAC deck are obstructing access to their property ahead. (J. Elias O’Neal)

With a canal-front hotel deal in the works, the group behind The Locks development downtown is taking a neighboring landlord to court for allegedly blocking access to an alley that’s needed for the project’s next phase.

At question is access to Pope’s Alley – a 35-foot-wide private alley owned by both NFA and one of Freund’s companies, according to a lawsuit filed March 16 in Richmond Circuit Court.

Pope’s Alley is between 1300 E. Byrd St. – one of the remaining plots in the 7-acre Locks development – and Freund’s Lady Bird Hat Factory at 140 Virginia St., where CarMax recently moved in.

The hotel likely would take shape atop a site where an old warehouse building stands.

The developers claim access to Pope’s Alley is necessary to secure a deal for a hotel development, the lawsuit said. Macfarlane Partners LLC, an entity owned by developer Charles Macfarlane, has had that portion of The Locks under contract for a hotel since Sept. 9, 2016, the suit states.

Access to this former warehouse space is the subject of a lawsuit between NFA and Margaret Fruend. (J. Elias O’Neal)

The suit alleges Freund’s companies put multiple obstacles in the alleyway, such as a dumpster, fire control boxes, basement steps and a raised platform for HVAC equipment. The lawsuit also alleges that Freund installed reserved parking spaces – constricting the alleyway to about 8 feet when cars are parked in the spaces.

NFA further alleges that the obstacles are impeding on the group’s effort to sell the parcel to Macfarlane, and that city approval of site plans for the hotel would not be granted unless the obstacles are removed.

The development team has sent written notice to Freund to remove the obstacles, stating how the noted obtrusions are making it difficult to navigate around their property.

“There is a clear and immediate problem with the cars parking in Pope’s Alley,” a July 2016 letter addressed to Fulton Hill Properties Chief of Operations Jon Ondrak stated. “Two parking spaces beside the chiller platform supports were recently striped, and signs installed marking them as “Reserved Parking” for CarMax. Due to their proximity to the dumpster enclosures, vehicles parking in those spaces impede our access to the Locks Warehouse property.”

The suit states NFA has tried to work with Freund to come to an agreement, but to no avail.

The lawsuit demands Freund’s companies to remove the obstacles in the alley and asks for damages of $10.8 million for lost profits.

Freund had not submitted a response to NFA’s lawsuit as of Friday evening, and would not comment on the pending lawsuit.

Vernon Inge, an attorney with LeClair Ryan who represents NFA with colleague Richard Coal, said his clients had no comment.

MacFarlane, who is not party to the suit, did not return messages regarding his plans for the hotel.

WVS Companies and Fountainhead Properties bought the 7-acre former Reynolds North property in 2012 for $35 million from Reynolds Group Holdings. They since have redeveloped much of the site into apartments and commercial space.