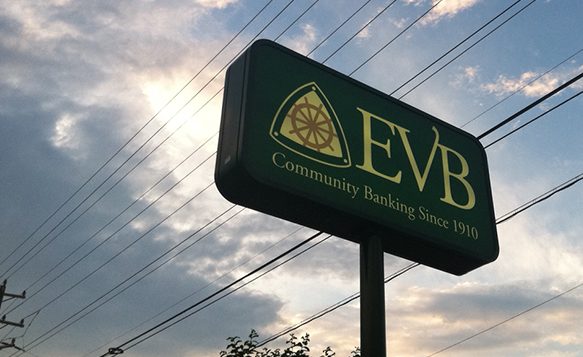 The latest in a string of local bank mergers has received the blessing of state and federal regulators, and is primed for a summertime closing date.

The $178 million marriage of Henrico-based Eastern Virginia Bankshares and McLean-based Southern National Bancorp of Virginia this month passed muster with the Virginia State Corporation Commission and the Federal Reserve.

The deal, which will bring together the companies’ respective EVB and Sonabank brands – with the latter to be the surviving name – soon will file additional documents that will need approval from the SEC. Both banks are publicly traded.

Shareholders of both banks also will vote on the deal in coming months, though no date has been set.

EVB chief executive Joe Shearin said the companies aim to close the deal early in the the third quarter, likely in July.

Since announcing the deal in December, Shearin said both banks have continued to operate as usual, while the merger is worked out in the background.

“You continue to operate business as usual, but you’re also working behind the scenes to talk about operations, corporate structure and systems,” Shearin said.

“We truly are still working down the road as a merger of equals with Rod, Georgia and me running it together,” Shearin said.

EVB recently shed at least 24 jobs leading up to the merger to cut costs.

At least one other local bank merger in the works. Virginia Commonwealth Bank and Bank of Lancaster are set to close their deal April 1, after which their combined headquarters will move to Richmond’s West End.

That deal also caught the eye of at least two local banking veterans who are attracted to the potential upside of the merger.

Won’t be the last merger. I expect Towne Bank is looking to buy or maybe a merger of equals like Union.