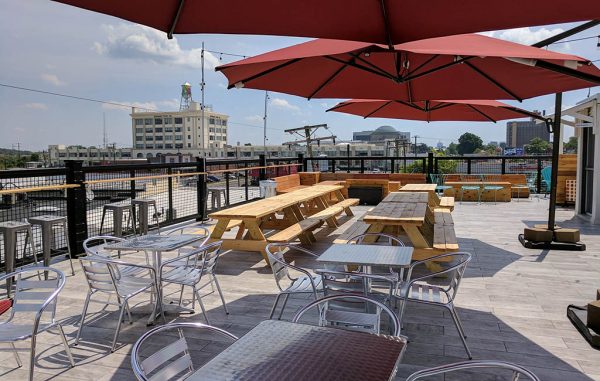 Following a wave of dining and entertainment ventures moving into Scott’s Addition, an events venue in the neighborhood is joining the fray with a new food and beer concept of its own.

The restaurant is a partnership between Kruger and Annie and Carter Snipes. The Snipeses purchased and renovated the Hofheimer in 2016, converting the second floor into an events space and filling other parts with a Peter Chang’s restaurant, local startup Uzurv and a rooftop bar.

HofGarden operations include a 2,000-square-foot “biergarten” taproom on the ground floor, which Kruger said will have 24 taps of German and local beers and a variety of international wines.

A 3,000-square-foot rooftop patio is part of HofGarden’s concept, where patrons can order light German fare, such as imported sausages and mustards, while playing games and taking in the city skyline.

Staying true to its Bavarian roots, Kruger said a dart room and beer stein lockers – where frequent patrons can store beer mugs onsite – could be installed by fall for Oktoberfest.

Kruger said the event space will remain open to outside caterers. However, he said HofGarden will offer an in-house Bavarian-style menu for users of the event space.

Kruger would not disclose the cost of outfitting the HofGarden space. He said the restaurant plans to hire a staff of 10 bartenders, servers and kitchen staff between the two floors.

Comfort and Pasture co-owners Jason Alley and Michele Jones, along with Saison owner Jay Bayer, are teaming up to open Bingo, which will combine a bar, arcade, restaurant and brewery under one roof next door at 2900 W. Broad St.

Another bar-arcade is in the works at 3121 W. Leigh St., and a bowling alley soon will take shape at 939 Myers St. next to the Cookie Factory Lofts. That’s not to mention the handful of breweries, cideries and distilleries already in the neighborhood.

Can’t wait to give this a try! I remember the beer gardens when I lived in Germany as a kid such cool gathering places for friends and families.

Can’t wait to check this out. There’s a biergarten in Brooklyn that I love to visit. http://radegasthall.com/

Wasn’t there another german bier garden planned for the corner of Summit and Broad (the old Sun Trust building)? Are these the same folks, or did that plan stall?