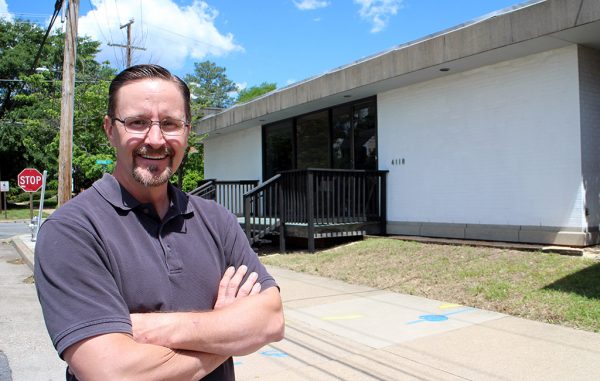 A local video production company is moving out of its downtown digs after buying its own building just beyond the Beltline Expressway.

Sprocket Media Works is moving from the rowhouse space it rented for more than two years at 11 S. Foushee St. to a 2,500-square-foot standalone building at 4118 Fitzhugh Ave.

Owner and CEO Patrick Bedall purchased the building last month for just under $300,000 with his wife Karen, through their BTG Partners LLC. The 1960s-era office building, located off West Broad Street just west of Interstate 195 and near its intersection with Westwood and Malvern avenues, previously housed Real Escape Room Richmond.

Bedall said he had been searching for a building to buy since September, selecting the Fitzhugh property over sites in Manchester and more expensive options in nearby Scott’s Addition.

“After two-and-a-half years (renting), I felt like we had enough business and could generate enough business to afford a mortgage,” Bedall said. “Scott’s Addition’s right there; the breweries are a 15-minute walk. Willow Lawn’s right there. I really see this area in the middle as up-and-coming.”

With nearly double the space of his downtown duplex, Bedall acknowledged the building is bigger than his full-time staff of three needs, but he envisions the space as an informal coworking space as his company grows over time. He said VCU students and other designers will be welcome to bum a workspace, and he plans on holding monthly mixers at the building.

Bedall said little work was needed to convert the building to his needs beyond painting and cleanup, the latter of which he said was considerable.

Bedall purchased the building from The Thompson Group LLC, an entity registered with the State Corporation Commission by Stuart Simon of the Stuart Simon Law Firm. Bedall said the building was offered for $140 per square foot, and three buildings beside it also were listed.

Because of the condition and cleanup involved, he said he bought the building below its original asking price of $365,000. He secured financing through BB&T and worked with Margie Caplice of ERA Woody Hogg & Associates to close the deal. 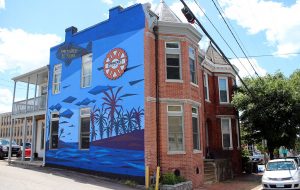 The building next door, 4116 Fitzhugh Ave., was purchased last August for $640,000 and now houses the ReidGoodwin law firm. The next building down the street was purchased in February for $305,000. Bedall said it is used by a medical device company, while the fourth building, previously used by a church, remains for sale.

Sprocket’s move frees up its Foushee Street space, which Bedall said he has to vacate by May 20. The 1,700-square-foot space is rented by Elizabeth Roark of Windswept Investments LLC.

As for the mural recently added to the side of the Foushee building, Bedall said he will miss it. Despite the company’s logo included on it, Bedall said he didn’t commission it but was pleasantly surprised it was worked into the mural as part of the Richmond Mural Project.

“We have a lot of blank canvas, so maybe one day we’ll do a mural at this location,” he said.

Sprocket isn’t the only media firm on Foushee moving out of the neighborhood. Ad agency ndp, which did commission the mural on its building at Foushee and East Cary streets, is preparing to move to Scott’s Addition later this year.

Bedall launched Sprocket in 2014 after 16 years at Henrico-based Metro Productions, where he started as a production assistant and left as chief operating officer. His staff and pool of freelancers produce videos for broadcast and the web, for clients such as Markel Insurance Co., HCA Virginia Health System and Väsen Brewing Co. About three-fourths of its business is local, Bedall said.

He said he expects to hire an additional employee by the end of this year and ultimately employ six to eight people.

“The industry’s changing,” Bedall said. “People want more video, but they want it cheaper. The work we’re doing is $6,000 to $8,000 web spots that other people are charging $30,000 for. By keeping the overhead low, we’re able to do that and pick and choose the projects we want to do. I’m able to say no.”

Congratulations, Patrick and the Sprocket team!

If anyone is interested in renting the great office space (mural included) they are leaving on Foushee, please email rent11foushee at gmail.