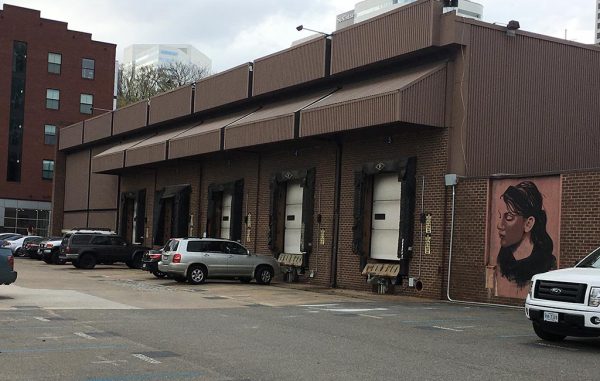 Access to this former warehouse space is the subject of a lawsuit between NFA and Margaret Fruend. (J. Elias O’Neal)

A local developer is firing back against allegations that she’s purposely blocked a competitor’s access to an alleyway and impeded a pending hotel deal along the canal-front.

An entity tied to Margaret Freund, head of Richmond-based Fulton Hill Properties, last week filed a countersuit against a group of developers who sued her LLC in March related to the right-of-way to Pope’s Alley – a 35-foot-wide private alley owned by both sides.

North Falls, according to court records, claims access to Pope’s Alley is necessary to secure a deal for a hotel that would be built on 1300 E. Byrd St. – one of the group’s remaining plots in its 7-acre Locks development. That planned hotel parcel sits next to Freund’s CarMax-anchored Lady Bird Hat Factory at 140 Virginia St., separated only by the alley.

Macfarlane Partners LLC, an entity controlled by developer Charles Macfarlane, has had that portion of The Locks under contract for a hotel since Sept. 9, 2016, the suit states.

According to the countersuit, Freund learned of North Falls’ construction plans for a 400-car parking garage that would serve the hotel, with an entrance at the western end of Pope’s Alley. 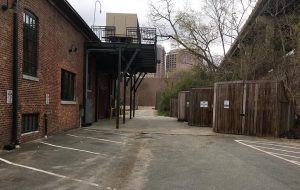 NFA’s original suit claims the parking spaces (left), dumpsters (right) and the above HVAC deck are obstructing access to their property ahead. (J. Elias O’Neal)

Freund seeks to block the alley from being used by hotel guests for ingress and egress, arguing that hotel patrons would overburden the alley with traffic and trespass on her portion. That would thereby infringe on the agreement she made with Reynolds Metals, which owned the alley and the Locks sites prior to redevelopment.

“It is anticipated that the use of the 400-car parking garage at the western end of Pope’s Alley will cause up to 2,000 daily vehicle trips across the alley for guests and employees entering and exiting the hotel,” the counterclaim said.

Freund’s counterclaim seeks to retain control of her easements in the alley, including the ability to house an HVAC platform and existing delivery parking.

Freund also filed a motion to force North Falls to turn over documents and plans related to the proposed hotel project, details of which have not been made public. No plans for the hotel have been filed with the city, and details of the plan in the lawsuit are scant.

“Because North Falls has asserted claims based on its alleged rights and expectation … it must produce the documents for the court to consider,” the countersuit said.

MacFarlane, who is not party to the suit, could not be reached for comment Wednesday afternoon regarding his plans for the hotel.

North Falls’ original suit alleges Freund’s companies put multiple obstacles in the alleyway, such as a dumpster, fire control boxes, basement steps and a raised platform for HVAC equipment. The lawsuit also alleges that Freund installed reserved parking spaces – constricting the alleyway to about 8 feet when cars are parked in the spaces – all claims Freund denies in her countersuit.

The lawsuit demands Freund remove the obstacles in the alley and asks for damages of $10.8 million for lost profits.

Freund, in denying those claims, argues that she sought permission from Reynolds to build a raised platform for HVAC equipment over Pope’s Alley. The suit also claims Reynolds conveyed a portion of Pope’s Alley to 140 Virginia to build the HVAC platform and ramp needed for delivery vehicles.

Turner A. Broughton, an attorney with Williams Mullen who represents Freund with colleagues J.P. McGuire Boyd Jr. and Andrew O. Mathews, would not comment on the pending litigation.

Vernon Inge, an attorney with LeClair Ryan who represents North Falls Acquisition with colleague M. Richard Coel, said his clients had no comment.