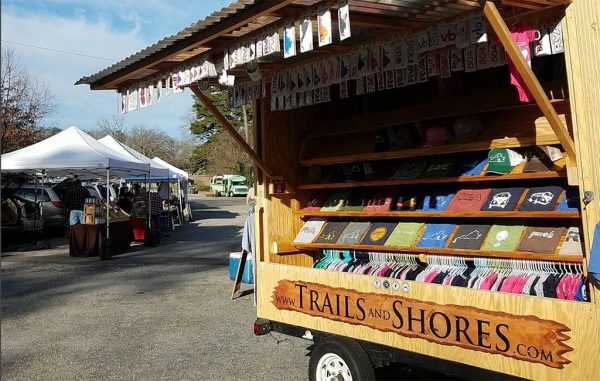 The company operates out of a pop-up trailer at area events and markets. (Trails & Shores)

A staple of the South of the James Farmers Market is laying down roots – this time north of the river.

Trails & Shores, which prints and sells locally themed apparel and decals online and out of a pop-up shop at area events, has signed a lease at 1906 E. Main St. in Shockoe Bottom.

Founder and owner Meade Fitzgerald said he hopes to open in early July.

The business has evolved since Fitzgerald started it five years ago, after the VCU basketball team’s Final Four run.

“I had lost my job and was a little lost,” he said. “I learned to screen print as the whole ‘Havoc’ craze for VCU was starting.”

Fitzgerald got licensed by VCU and began selling “Havoc” shirts. The company shortly after started to make “RVA”-branded gear under the name The Flood Factory and then Virginia Outfitters, before rebranding a third time to Trails & Shores last winter. 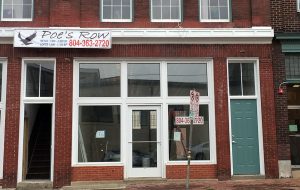 For the last few years, Fitzgerald has been printing out of his house and pressing out of a rented garage, while bringing his trailer to markets around Richmond, such as the South of the James Farmer’s Market in Forest Hill, and the rest of the state on weekends.

To bring everything under one roof, he rented a 1,000-square-foot space in Shockoe Bottom. Fitzgerald said he’ll do light renovations of the space himself. Ann Schweitzer of One South Realty helped find the spot.

“It’s a perfect spot for me. It’s right near some parks, the Capital Trail and other trails,” he said.

Last year, Trails & Shores began distributing to local businesses like Orange (soon to relocate from Carytown), Ellwood Thompson’s and Shyndigz. But Fitzgerald said events make up about 80 percent of revenue.

Trails & Shores’ reach extends beyond Virginia, with designs for the likes of Oregon, Maine, New York, North Carolina and more. Fitzgerald said he hopes online sales for those products will continue to grow as he settles into the brick-and-mortar space.

Fitzgerald is the sole owner of the company, with local graphic designers Becca Grogan and Kerri Douthat helping create products.

“It’s been the dream to get a shop. I have to thank the Richmond community, my family, and Karen and Doug Grisevich of South of the James for making this possible,” Fitzgerald said.