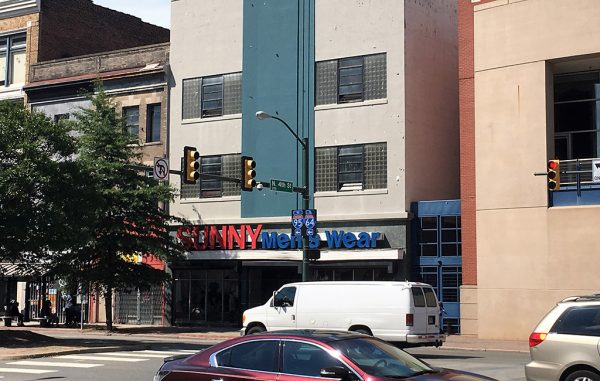 A $3.6 million renovation of the Sunny’s building will include a restaurant and 20 apartments. (J. Elias O’Neal)

A local developer and restaurateur are teaming up yet again, this time taking a bite out of a busy stretch of East Broad Street downtown.

It paid $1.02 million in the deal, which closed June 15, according to city records. The building was assessed at $576,000. The property abuts the Greater Richmond Convention Center.

“We moved very quickly on this deal,” Johnson said. “We went to contract on the building on May 19.”

Preliminary plans call for the three-story, 18,000-square-foot building to be converted into 20 apartments on the second and third levels.  The ground floor, which now houses Sunny Men’s Wear, will be closed and converted into a restaurant run by Chris Tsui’s Richmond-based EAT Restaurant Partners.

Tsui’s company, which soon will have nine restaurants in its portfolio, is partnering with Monument Cos. on redevelopment costs, estimated at $3.6 million. Virginia Commonwealth Bank is financing the project. 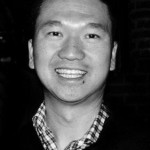 “We’re still developing a concept for the restaurant,” Tsui said. “We want something that is going to fit in with the area.”

The two companies are frequent collaborators – they partnered on the Wong Gonzalez building at 412 E. Grace St. Monument Cos. renovated a number of EAT Partners’ restaurant locations as well, including Foo Dog in the Fan and Boulevard Burger & Brew in Scott’s Addition.

Tsui’s firm also plans to add a restaurant to the Cary Street Station development, which is led by Monument Cos. and Howard Kellman of the Edison Co.

“We very much enjoyed working with Chris and his team,” Johnson said. “We all decided we would like to replicate the process if an opportunity presented itself.”

The Monument Cos. is the latest local developer to take notice of this stretch of Broad Street.

An entity tied to Duke Dodson, president of Richmond-based Dodson Property Management, acquired 317 E. Broad St. in May, the fifth contiguous property it purchased on that block in seven months.

Washington, D.C.-based Douglas Development in March purchased a vacant, 2,000-square-foot building at 314 N. Second St. in Jackson Ward, adding to its holdings of more than a dozen properties on surrounding blocks.

“With all the apartments coming in, and what’s about to happen with Douglas Jemal’s development, it just seemed like the right place for a restaurant,” Tsui said of 326 E. Broad building.

Tsui’s and Monument’s timing seems to be dead-on, as a group of investors led by Dominion Energy CEO Tom Farrell is backing and gaining momentum on a plan for a new arena downtown to replace the Richmond Coliseum, as well as potential redevelopment of surrounding properties.

“That’s major,” Tsui said. “Anything that happens to those properties is going to be a big boost for us.”

Johnson added that the momentum on Broad Street corridor is gaining steam.

“As far as frontage along Broad, this is a great location,” he said. “It was a good deal that gave us that access we wanted for that stretch of Broad Street.”

Grateful investment in my neighborhood is moving forward but we’re looking for walkable, practical, retail for those of us who live, work, attend college, or visit hotels downtown (none of which are looking for parking spaces). Hoping the fabulous restaurants will attract the attention of retailers, like a city Target, that will serve the city center.

While that would be nice, I seriously doubt Target will come to downtown Richmond anytime soon. Target seems to only be building CityTarget and Target Express in large metropolitan cities. Richmond is still too small and the downtown area has a ways to go as well as far as the crime and poverty on the streets in that area. It’s getting better but I doubt it’s ready for a Target level retailer yet.