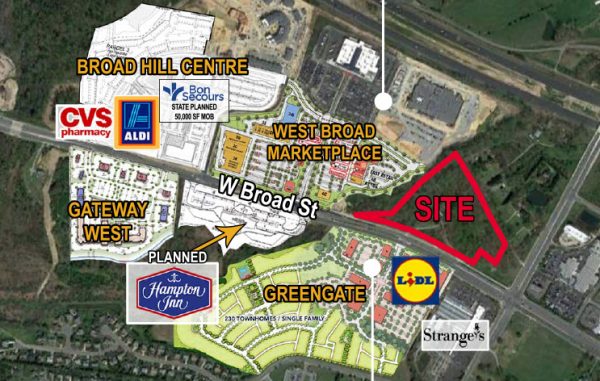 The Short Pump land rush along West Broad Street may be reaching the end of the line, at least within the confines of Henrico County.

Two of the last large developable tracts of land with Broad Street frontage in the Short Pump section of the county will likely soon be out of reach, as one has just gone up for sale and the other is under contract.

Members of the Anne McGeorge Clements Family Limited Partnership have listed for sale the family’s 12-acre property at 12120 W. Broad St., at the corner of North Gayton Road.

Across Broad Street, Atlanta-based Core Property Capital has placed about 23 acres at 12401 W. Broad St. under contract for a possible mixed-use development.

If both properties are sold, there will be no more large tracts of undeveloped West Broad Street frontage available for purchase on that stretch of Broad.

“With the exception of the Pruitt Family property in front of Short Pump Town Center, this is it,” said Mark Douglas, a broker with Cushman & Wakefield | Thalhimer who has completed several land deals along the West Broad Street corridor in Henrico County and has the listing on the Clements property. “It goes to show you how successful Short Pump has become since the [Short Pump] Town Center opened…development continues to flow into the area.”

The only other undeveloped plot along Broad in that area is 8 acres at 12341 W. Broad St., which is slated for a new Hampton Inn & Suites hotel at the hands of locally based Shamin Hotels.

Under construction nearby along Broad are GreenGate, a 75-acre mixed-use development; West Broad Marketplace, which sold this month for $74 million; and the Bon Secours-anchored Broad Hill Centre.

Bernard Clements, who is overseeing the sale for the family, said they are entertaining four serious offers for their parcel, all from all out-of-town development firms seeking to pay above the $8.5 million listing price.

“The property is simply ripe for development,” he said “When you see the level of activity occurring in the area, we just knew that it was time to sell.”

The property is currently zoned agricultural, according to county property records, and is vacant land, save for an old one-story home that can be seen from West Broad Street.

Douglas said the property can be rezoned for urban mixed-use – allowing for the most dense forms of residential and commercial development. The same zoning designation is beginning to come into favor to add density to nearby Innsbrook.

“Whatever would be constructed on the site, it would be something that would complement the type of development occurring in the area,” Douglas said.

Clements said the family partnership is looking to make its final decision on the offers by July 28.

Much like the prolific Pruitt family’s decision to develop Short Pump Town Center on nearly 150 acres of family land, Clements said he and his kin are hoping to sell the property to a developer willing to build something that leaves a lasting impression on Short Pump.

“This is a process we are not taking lightly,” Clements said. “We’ve had this property in our family for three generations. Whatever is constructed there, we want it to have a positive and lasting impact on the area.”

Clements wasn’t shy about what type of development he wants to rise on the space.

“We envision something that’s mixed-use with multiple tall buildings, and a couple of outparcels fronting West Broad,” he said. “Something with ground-floor retail, a couple of floors of office and a residential building…We’re looking for someone to maximize the land use of the property.”

Meanwhile, Core Property Capital is marketing the nearly 23-acre property it has under contract for a proposed mixed-use development called Gateway West.

If purchased, it would be Core Property’s first retail development in Virginia. The seller is Manakin-Sabot-based Schafstedde Properties.

Alicia Farrell, a broker with Cushman & Wakefield | Thalhimer who’s marketing and preleasing the development with fellow brokers Connie Jordan Nielsen and John K. Nielsen, said plans call for the development to include seven pad sites that mostly front West Broad Street. She added the site may also lend itself to some big box retail spaces and an age-restricted housing development.

No cost estimate or timeline has been released for the development, which does not have a list price.

“We’re hoping to submit a rezoning and site plan with the county by the fall,” Farrell said.

The property, which is zoned agricultural, is assessed at $2.4 million, according to county records.

Core Property could not be reached for comment last week. The company has several retail and multifamily holdings across the South, West and Midwest.

Anne Allen, listed as the managing partner of the entity that owns the property, could not be reached for comment.

With much of Short Pump’s West Broad Street frontage accounted for, brokers and developers have begun to set their sights on the area’s next frontier: Goochland County.

Car dealer Larry Page’s Audi of Richmond is preparing to open its dealership at 12592 W. Broad St. in the county. Page also has additional commercial development in mind for the adjacent parcels.

Next door to Audi, a fledgling chain of high-tech golf driving ranges called Drive Shack is looking to build a $25 million golf and entertainment venue next to Route 288. It’s set to go before the county’s Board of Supervisors today for approval.

Just how far west the development train will spill over beyond the Henrico County line depends on the willingness of Goochland property owners to sell off their parcels for future projects and the county government’s appetite for growth.

“I think you’ll see development move past [Route] 288,” Farrell said. “There are several property owners that have been monitoring Short Pump’s growth for years. They are waiting on the right opportunity to sell.”

Douglas agrees, adding that there could be a boomerang effect that pushes redevelopment back into Short Pump.

“I think you’ll see it bounce back from 288 and come back into Short Pump,” Douglas said. “It may come in the form of redevelopment of the parking (lots) in some of the existing shopping centers. I think at this point everyone is going to see what happens to these two parcels and the Pruitt property.”

I am very much PRO DEVELOPMENT but how awesome would it be if the Pruitt Family made some green space available? Henrico County could buy some land for park? Quality of Life