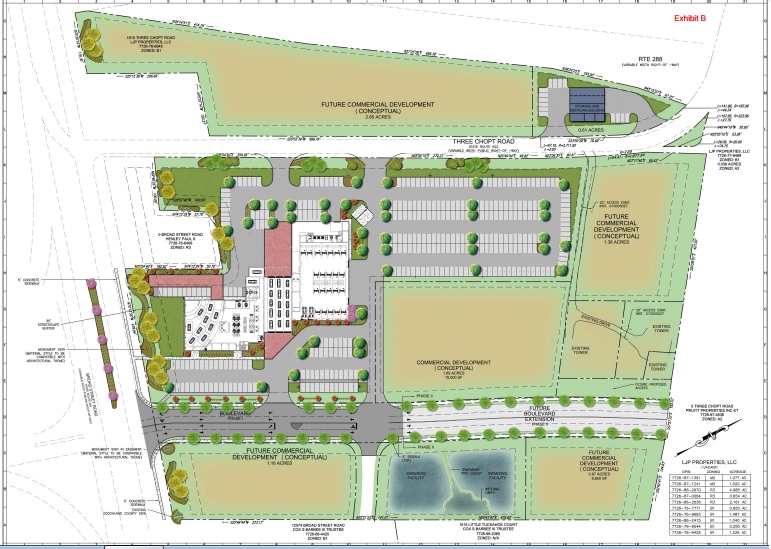 A site plan for the project. Click to enlarge.

A local car dealer’s proposed 18-acre development near the Henrico/Goochland county line could get its final approval today.

Larry Page, who owns Page Auto Group, is planning a 41,000-square-foot Audi dealership at 12592 Broad Street Road in Goochland County. The location would replace Page’s current Audi showroom in Henrico at 9001 W. Broad St. and will be the initial and largest piece of what county records show is a multi-phase commercial project.

Page’s LJP Properties LLC will go before the Goochland Board of Supervisors tonight for zoning approval and a conditional use permit for the land, which sits near Broad Street Road’s intersection with Route 288. The county’s planning department already gave the plan its blessing at a meeting last month. 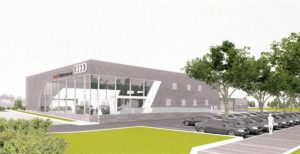 A rendering of the dealership included in county filings.

Plans filed with the county show the dealership sitting on 6 acres, as well as four outparcels for future development. The westernmost parcel would consist of 2.85 acres and house a 21,000-square-foot building with a large lot. Another 15,000-square-foot building is shown on the adjacent parcel to the north, and structures proposed as 3,450 square feet and 6,600 square feet would be eyed for the eastern part of property.

The documents do not show what tenants might occupy the future buildings.

Through the LLC, Page has cobbled together multiple parcels for the development over the last 18 months. To date, the LLC has spent at least $6.1 million to acquire 15 acres of the 18.6 acres of land needed for the project, Goochland County records show. The remaining acreage is two parcels – one owned by VDOT, the other by a private owner – which Page has yet to purchase.

The dealership will include a showroom area, service and repair areas and an accessory car wash facility and would employ approximately 48 employees, according to the application with the county.

Page did not return calls seeking comment about the plan. LJP is represented by attorney Jennifer Mullen from Roth Doner Jackson Gibbons Condlin. She did not return an email by press time.

The Goochland development will give Page more room for his new Maserati dealership, which opened last year in a renovated building at the site of his current Audi and Volkswagen lots. Page said at the time that Maserati would get bigger accommodations on West Broad Street once the new Goochland dealership is built.

The project would also continue the trend of development pushing ever west of Short Pump to and over the county line. It follows projects just on the other side of the Henrico line such GreenGate, Broad Hill Centre and West Broad Marketplace.