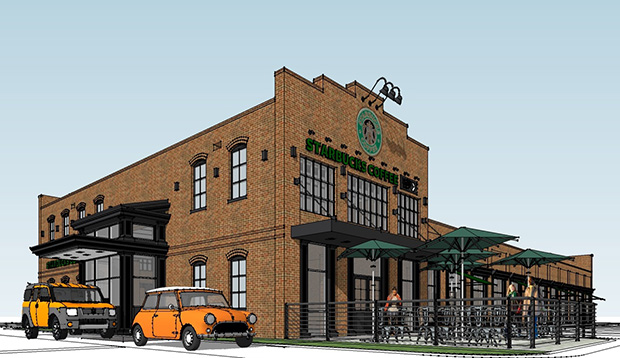 A rendering of the forthcoming Starbucks at GreenGate. Courtesy of Baskervill.

The developers of a 75-acre mixed-use project in Short Pump have tied down another tenant.

The coffee shop’s building is being designed by local architecture firm Baskervill and will sit at the western end of the development. German grocery chain Lidl will bookend the eastern side of the project with a 36,000-square-foot store. Overall plans call for nearly 200,000 square feet of retail and office space, 200 single-family homes and 50 townhomes.

“We’re fired up,” said J.B. Gurley, a principal with Markel | Eagle. “Obviously Starbucks is a national tenant and we’re thrilled to have them as a cornerstone. Starbucks is a place where people like to gather.” 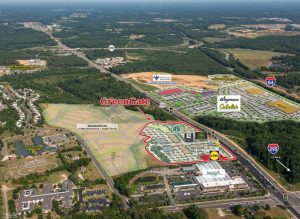 The development’s commercial portion will front Broad, while the residential section will take shape behind it. Courtesy NAI Eagle.

Gurley emphasized that GreenGate continues to focus on luring local tenants to GreenGate, a strategy that has already proven successful.

The Richmond Restaurant Group has signed on to open a new location of The Daily Kitchen & Bar in GreenGate. Chris Tsui’s EAT Restaurnat Partners has plans for a 6,100-square-foot sushi and steakhouse restaurant in the development.

And locals Jay Shah and Joel Gilbert are bringing a Mellow Mushroom to the site.

“Our emphasis and focus is on local,” Gurley said, adding that the developer is in talks with yet another local restaurant. “The next part of our plan is to reach out to and bring the best of local Richmond retailers to GreenGate.”

Gurley said the plan with Baskervill’s design is to “carry the spirit of old Richmond into the West End.

“It’s going to look a lot different and I think a lot better than the run-of-the-mill shopping centers that people think of with suburban shopping.”

Site work is underway at GreenGate, and Gurley said foundations for the retail and restaurant buildings will be poured in early May, with the first set of buildings planned to be ready in September. The first wave will include Mellow Mushroom, the Daily and Tsui’s new restaurant.

As for the residential sections, Markel | Eagle is in the process of getting final approvals from Henrico County and expects to begin work in earnest this fall. The first residential wave will include both townhomes and single-family houses.

Eagle Construction, another sister company, will handle construction on all of the residential pieces.

GreenGate will be joined by plenty of new neighbors along that stretch of West Broad Street. Locally based Shamin Hotels recently purchased a plot from Markel | Eagle that abuts GreenGate’s western boundary.

Shamin CEO Neil Amin said the company has plans for a Hampton Inn and Suites with around 120 rooms. The company is still in the planning stages for the new hotel and is working to file a plan of development with the county.

Across Broad is West Broad Marketplace, a new large development that will be anchored by a recently opened Cabela’s store, and Wegman’s, which is set to open later this year.

Recreation ventures are also targeting that edge of Henrico. A new indoor air sports park with trampolines, zip lines and climbing walls is planned across Broad at Towne Center West. And Topgolf, a fast-growing chain of high-tech driving ranges, could potentially land nearby as well.

Nothing wrong with snagging Starbucks, but with all the talk of bringing local biz in, especially this quote: “It’s going to look a lot different and I think a lot better than the run of the mill shopping centers that people think of with suburban shopping.” I am surprised they are not welcoming Urban Farmhouse or Cafe Caturra instead.