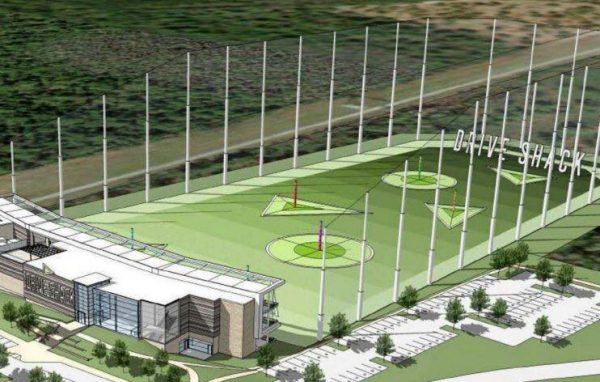 The fate of a $25 million golf and entertainment venue planned near Short Pump now rests in the hands of the Goochland County Board of Supervisors.

The project, which as proposed would feature around 90 driving range bays stacked on three levels, along with a central restaurant, shop, lounges, game room, event space and upper-level outdoor terrace, must next pass muster with county supervisors. The board is expected to vote on the matter July 5.

Local attorney Andy Condlin of Roth Jackson is representing Drive Shack in its rezoning request to allow business use on the site.

The company expects to employ around 350 workers at the facility.

Approval likely will help Drive Shack beat rival Topgolf to the punch in the Richmond market in their nationwide race to open high-tech driving ranges in metro areas.

Texas-based Topgolf is the frontrunner in the niche, with about 30 locations open, including Virginia Beach, Loudon and Alexandria, and dozens in the works. The company said last year the Richmond market was on its radar.

Drive Shack’s Goochland site would be its second in development nationwide, along with one under construction in Orlando. The publicly traded company also owns dozens of golf courses in the U.S.

Drive Shack’s 13 acres are part of a 121-acre tract owned by the Pruitt family. The site abuts the northern end of a new Audi dealership-anchored commercial development that’s under construction fronting Broad Street and owned by Larry Page of Page Automotive.

It looks nice on paper, but having seen the one in Virginia Beach along I-264 and Newtown RD, it is a sea of ugly netting several stories high and several hundred yards long. Visually an eyesore. The Board of Supervisors should take a trip to Virginia Beach and see what it really looks like prior to rezoning the property.

What does an eyesore mean? Like it just bothers you personally or it has a social or societal impact on the area?

It seems like you could call just about anything an ‘eyesore’.